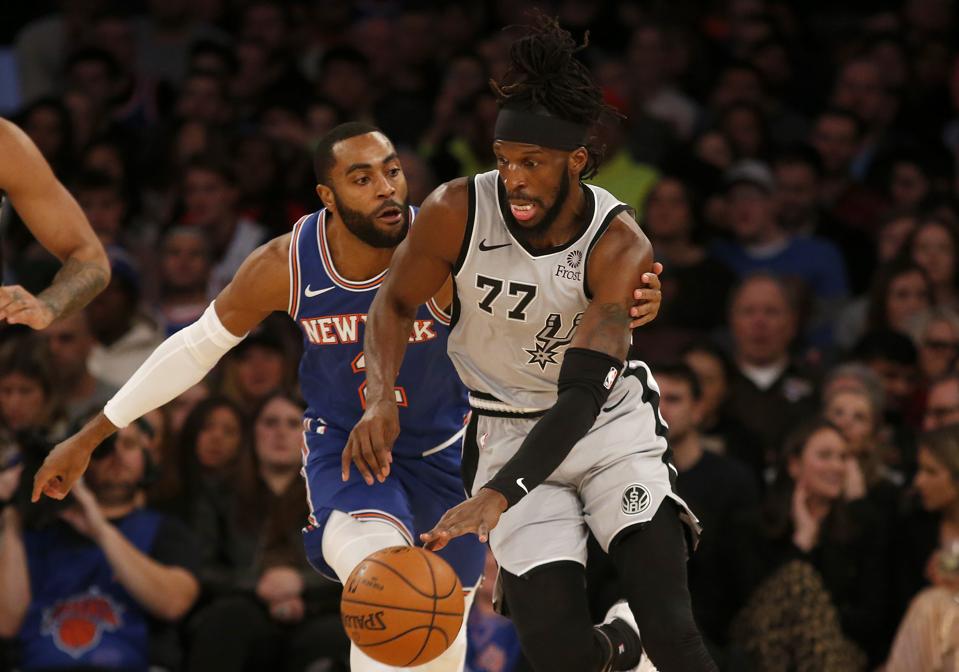 NEW YORK, NEW YORK – NOVEMBER 23: (NEW YORK DAILIES OUT) DeMarre Carroll #77 of the San Antonio … [+] Spurs in action against Wayne Ellington #2 of the New York Knicks at Madison Square Garden on November 23, 2019 in New York City. The Spurs defeated the Knicks 111-104. NOTE TO USER: User expressly acknowledges and agrees that, by downloading and or using this photograph , user is consenting to the terms and conditions of the Getty Images License Agreement. (Photo by Jim McIsaac/Getty Images)

DeMarre Carroll was the San Antonio Spurs’ top free-agent acquisition of the summer, at least in terms of dollars spent. The team gave out a three-year, $20.65 million contract, with a partial guarantee of $1.35 million for the third season. Depth was needed behind Rudy Gay, so the move seemed logical at the time.

Two months into the season, Carroll is around as depth, but he can’t find his way out of coach Gregg Popovich’s doghouse, appearing in 13 of a possible 30 games. He has accumulated double-digit minutes in a game just seven times and has crossed four points once. For a player under a guaranteed contract for at least one more season, and with how the Spurs have crumbled so far, there is seemingly no end in sight for his spot on the pine.

Carroll has said all the right things, too. Per Jeff McDonald of the San Antonio Express-News, the veteran forward is just waiting for his opportunity:

“You don’t know when your opportunity will come,” Carroll said. “Maybe somebody will get hurt, you get traded, it doesn’t matter. You’ve got to be ready. … You try not to have no hard feelings, because it’s going to come back to you. Pop’s the coach; he does what he wants to do. I just got to get ready to play when he asks me to.”

That opportunity may arrive eventually. Injuries do happen. Trades, if rarely with the Spurs, are common in the NBA; DeMar DeRozan is a potential candidate to leave, which could open a significant amount of playing time. Something will arise down the road. If not, Carroll needs an opportunity elsewhere.

The issue comes with the 33 year old’s contract, which actually descends to $6.65 million in 2020-21, but is still a chunk of change for another team to take via trade. Couple that with the minimal production, and it’s difficult to see where his value exists for another team to surrender a player or draft compensation in return. It wouldn’t be like the Spurs to attach a draft pick to move Carroll, either.

The alternative is agreeing to a buyout, which rarely happens for a player with another year remaining on his deal. San Antonio can waive and stretch Carroll, but that, but that consumes valuable cap space even further than the length of his deal.

Basically, the Spurs are left with one option: hoping this situation works out.

Carroll is behind Gay in the rotation, which probably won’t change. DeRozan, barring an aforementioned trade, will remain a starter. The best chance for extra playing time is if Popovich pulls the struggling Marco Belinelli from the rotation. Even then, Lonnie Walker IV might be the next man up, but the second-year guard has also eyed maintaining a regular role.

So carving Carroll a role in Popovich’s rotation seems impossible right now. There’s no room unless the Spurs are either up or down by 30 points, as seen with games on Dec. 21 and 23.

The ex-Hawk and Raptor just needs to continue staying patient, hoping for that role to open this season. It’s a situation that stands to be evaluated later on or after the year ends, when roster changes are inevitable. Having someone eat up nearly $7 million to not play doesn’t work. That type of situation is unusual for the Spurs, so a resolution should eventually arrive for the franchise.

Behind ‘The Rise Of Skywalker’s’ First $500 Million: Why JJ Abrams Had To Revive Emperor Palpatine And Kill Off Ben Solo