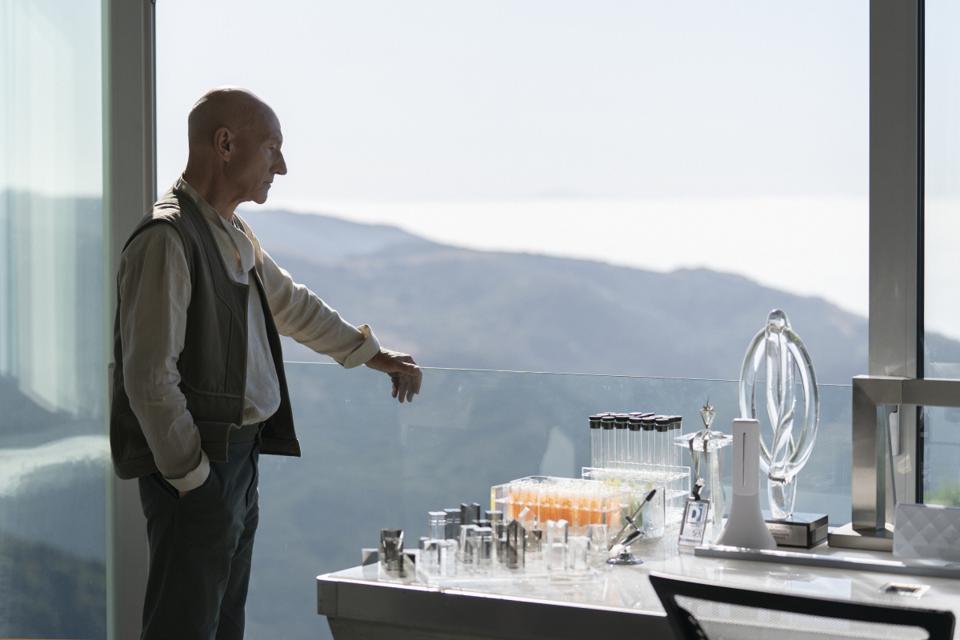 Picard’s two-part Season 1 finale ends with humanity on the brink, Romulans on the warpath and our … [+] heroes caught up in the middle of an epic showdown.

Humanity is on the brink. A strange an unexpected threat has suddenly reared its ugly head. Things are looking very grim, indeed.

Sound familiar? I’m not actually comparing the coronavirus pandemic to Star Trek: Picard, but right now it’s hard not to see this kind of allegory everywhere we look. COVID-19 came out of nowhere. It took a while for everyone to realize it was such a massive threat. Now, it’s looking more and more like we might be too late to avert disaster.

In Picard, it appears that the Romulan secret society the Zhat Vash were both right and wrong in some ways about the “destroyer”—the synth threat that they’ve been attempting to ward off for hundreds of years thanks to a mysterious warning—the Admonition—they happened upon centuries prior.

In Thursday’s penultimate episode of Picard, our rag-tag crew finds itself in orbit around Soji’s home world. Narek’s ship bursts out of the wormhole behind them and there’s a brief exchange of fire. The borg cube commanded by Seven of Nine also appears. She’s apparently been able to track them from her time assimilated back into the collective. The dogfight comes to an abrupt halt when, out of nowhere, giant space orchids appear, swallowing up the ships and bringing them crashing down to earth, all systems and power down.

Picard passes out and starts talking in his stupor and when he wakes, Agnes is there. She’s scanned him and discovered his brain anomaly, so he comes clean with everyone but warns them if they start treating him like a dying old man they “risk pissing me off.”

Once outside of the ship, they travel to the Borg Cube and there’s a joyful reunion between Elnor, Seven of Nine and Picard, who’s dismayed to learn of Hugh’s death. Elnor and Seven of Nine stay to get the cube’s systems up and running—it may be instrumental in the fight against the 218 Romulan warbirds on their way to the planet. 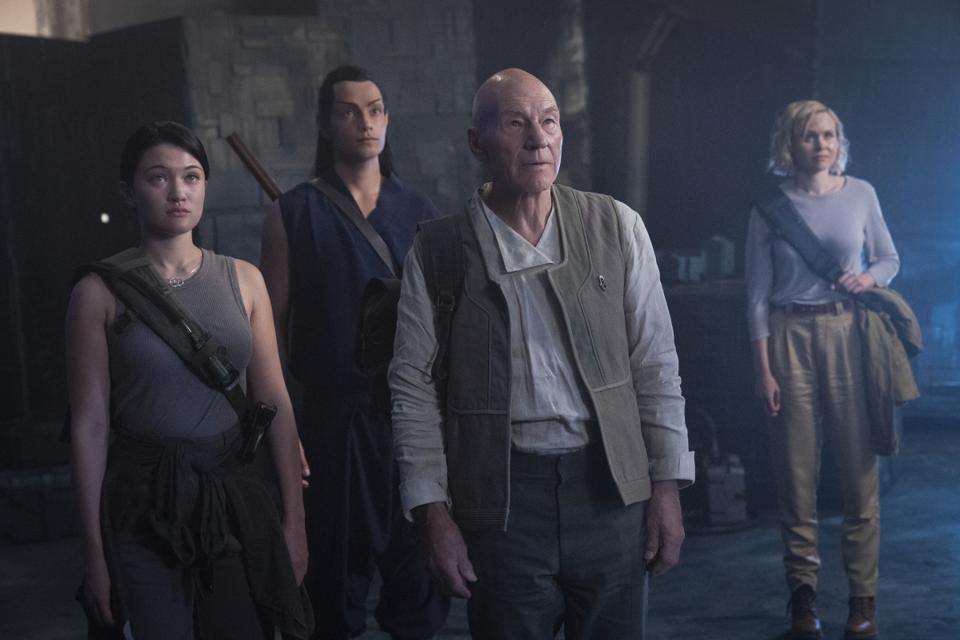 Picard and his crew travel to the synth base where they meet the rest of the synth “siblings” of Soji, as well as a human scientist, Dr. Altan Inigo Soong (played by Brett Spiner) who looks like a human version of Data (both because he’s played by the same actor and because he, apparently, was the basis for Data’s appearance).

Narek is brought in as a prisoner as well, banged up from his crash but overall in decent shape.

Picard and the others warn the synths about the Romulan arrival, and tell them about the Admonition. Soji’s golden-skinned doppelganger, and apparent leader of the synths, Sutra, tells them that the Romulans have been driving themselves mad for centuries trying to decipher a message that was never intended for them.

She’s mastered the Vulcan mind meld, and uses it on Agnes. Sure enough, she can understand it perfectly. It’s a warning from an ancient synth society that humanity will destroy itself in its attempt to destroy their own creations, out of fear and jealousy.

These ancient synths somehow exist outside of time and space and are waiting for a call for help. That’s why they set up the beacon in the first place. Sutra wants to call for their help, but Soji isn’t so sure. This would mean the end of all organic life in their galaxy.

But Sutra is ruthless. She allows Narek to go free and kills one of the other synths in order to make it look as though he did the deed. She uses this murder to convince the others that they have no choice but to seek out help, even if it means total annihilation. Soji, once a doubter, is now fully on board despite Picard’s protests.

Picard is placed under house arrest after he tries to persuade the synths that there is another, more peaceful, way. But when he suggests that Starfleet will listen to him and work to protect the synths, Dr. Soong scoffs at him. Starfleet wouldn’t listen to Picard after the Mars attack, why should they now? (I think maybe the fact that Picard can show that Commodore Oh was behind that attack might be a good reason, but he isn’t given the chance to argue his point).

Agnes convinces the synths not to arrest her. She is working with Soong to transfer his mind into a synth body, after all, and she’s “as close to a mother” as any of them have, according to the doctor. I’m not sure about this, but I think she’s tricking them and that she’ll work to help Picard, helping redeem herself in the process. She has a lot to redeem herself for after killing the man she loved in cold blood.

The Romulans are racing toward them, hellbent on destroying the synth. Sutra is ready to bring total destruction down on the galaxy now that she has the means to contact the ancient synthetic race thanks to the Admonition. And Narek has escaped and may become an unlikely ally to the rest of Picard’s crew, still free at the moment back on La Sirena.

Interestingly, the Romulans are now, in some respects, the heroes of the story. They’ve been ruthless and their meddling has almost certainly brought all of this down on their own heads. But they weren’t exactly wrong about the threat. The Admonition may have been intended as a message to other synth, but it still spelled out a clear warning and now that danger is on their doorstep. The Zhat Vash were right. The synth—or at least Sutra and the ancient synth she seeks to contact—are the true villains.

Sort of. It’s not that simple, of course. The synth have been pushed into this position by the Zhat Vash. But the Zhat Vash can hardly be blamed for fearing them. Had they never encountered the Admonition, of course, none of this would be happening at all, so it’s really this other ancient synth entity/entities that have planted these seeds of destruction.

The episode is titled “Et In Arcadio Ego” after the 1637–38 painting by Nicolas Poussin, a French Baroque painter, depicting shepherds near a tomb in Arcadia. The phrase is Latin and means “Even in Arcadia, there am I” and is generally interpreted as a memento mori, or reminder of death. Even in the idyllic paradise of Arcadia, death is present.

It’s an interesting title for the episode. On the one hand, they’ve found something of a paradise, their quest’s final goal and also perhaps brought upon themselves the total destruction of the galaxy. 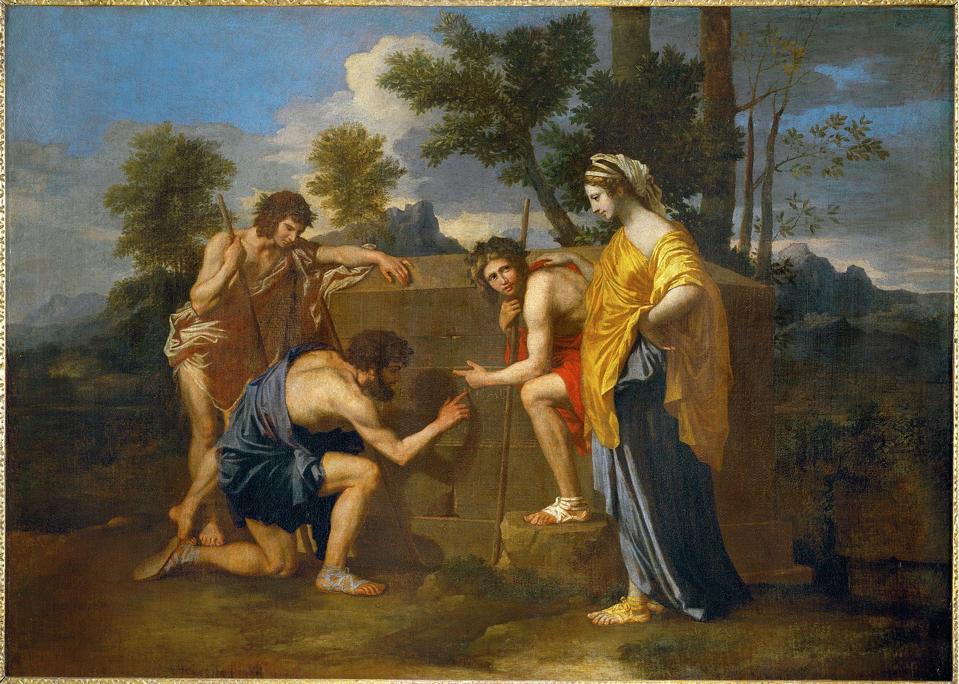 There’s another interesting connection between this painting and Picard. Poussin painted two versions of Et in Arcadio ego. The one pictured above is the second of the two, and the more famous (now in the Louvre). Another was painted in 1627. This reminds me, however unintentional it may be, of Data’s two very similar paintings—one in Chateau Picard and one held under lock and key at Starfleet Archives.

All told, a very exciting episode that seemed to be over in a flash. It’s just a shame we have to wait a whole week to watch the next one—though also kind of nice that it isn’t already over.

I’m not entirely surprised by the way things have played out, mind you. It seemed likely that the synth would, somehow, turn out to be an actual threat and that the Romulans would be the “heroes” (but also still major pricks). After all, Star Trek: Discovery’s second season was all about a last-ditch fight against a powerful AI seeking to do the very same thing. If Discovery’s crew was acting heroically to stop that threat, what makes the Romulans any different?

I did think it was cool to discover that the Admonition wasn’t exactly what the Zhat Vash believed and I’m still curious who (or what) actually created the message to begin with. The fact that we see Data’s face in the message suggests that there’s much more to the story. Hopefully these questions are answered next week.

You can read my review of last week’s episode here. Check out all the shows, movies and Netflix Originals headed to Netflix in April here.

The Coronavirus Is Making The Energy Sector Ill...