Breaking
Bitcoin And Blockchain Are The ‘Future’ Of Twitter,...
COVID-19 Pandemic Has Birds Changing Their Tune
Beat Zoom Fatigue With These 6 Tips
How, When And Where You Can See A...
New $2.2 Trillion Stimulus Bill Proposed—$1,200 Stimulus Checks,...
Why Do We Do What We Do? Manipulating...
California Brand Goes All-American As Amazon Bans Foreign...
The 3 Best Analytics Companies of 2020
Senator Cory Booker: Supporting Small, Minority-Owned Businesses Will...
Trump’s Taxes Are Finally Leaked—What’s Next?
Washington Heats Up Ahead Of First Presidential Debate:...
Systemic Racism Leads To Disparities In Nursing Home...
The New Regular: Prepare For Conflicts Of Customer...
Web VR.0 – Have VR Websites (Finally) Arrived?...
This Next Evolution Of E-Commerce Did $18 Billion...
This Next Evolution Of Ecommerce Did $18 Billion...
Home Business ‘Star Wars,’ ‘Bad Boys’ And ‘Sonic’ Battle Top Rental And Sales Charts
Business 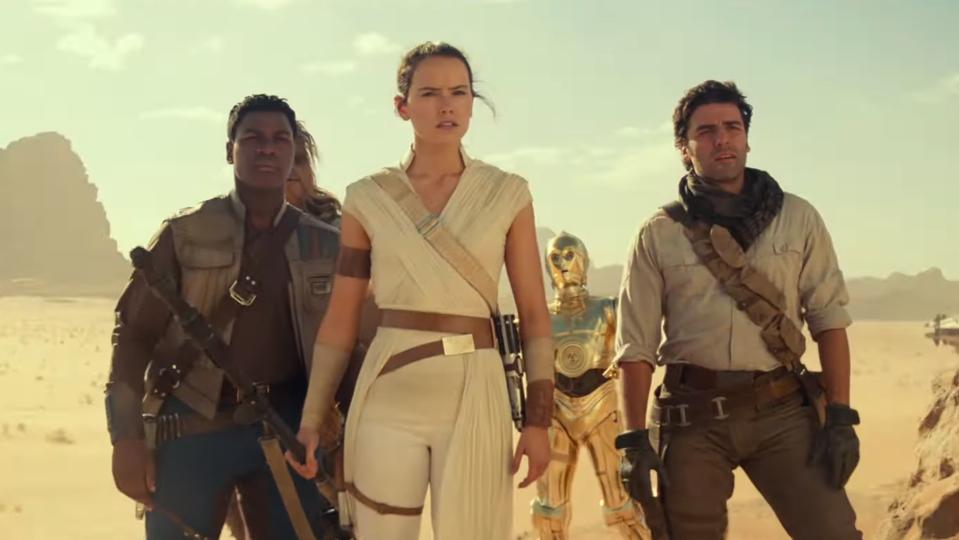 ‘Star Wars: The Rise of Skywalker’

In the realm of VOD (and electronic sell-through) charts, Bad Boys for Life and Sonic the Hedgehog topped FandangoNow last weekend, with The Invisible Man and Star Wars: The Rise of Skywalker coming up just behind. That’s notable since Fandango’s online rental and purchase charts rank in terms of overall revenue (like box office) as opposed to units rented or sold. So if someone rents Star Wars: The First of Skywalker for $5.99 as opposed to purchasing Sonic the Hedgehog for $19.99 (let alone $24.99 for 4K HD), that obviously means 1/3 the revenue accumulated.

And yes, folks are still buying Star Wars IX, but right now Bad Boys for Life and Sonic the Hedgehog are only available for purchase, while The Invisible Man is still in its “$20 rental” stage. The Rise of Skywalker is doing pretty well in its post-theatrical lifespan. The film is also the top-listed title on Google Play and is (again, not surprisingly) the top-selling physical media title over at Amazon AMZN . This doesn’t “mean” much in the broad scheme of things, it’s a Star Wars movie so of course it was going to do well.

That said, there’s a reason why Walt Disney DIS sent Onward from “priced to buy” digital HD on March 20 and then straight to Disney+ on April 3 while letting The Rise of Skywalker run its natural course as a post-theatrical title. There was every reason to think that the Star Wars flick would sell a lot more, both in terms of digital purchases and (especially) physical media, compared to the under-performing Pixar title. Fun trivia: Rise of Skywalker has a 52% critic “tomatometer” rating and an 86% audience scoring, which is almost diametrically opposite to The Last Jedi (91%/43%).

Otherwise, I expect we’ll see Sonic the Hedgehog and Bad Boys for Life squabbling at the top of the respective charts for the near future. All due respect, I don’t see Rhythm Section or Fantasy Island burning up the home sales/rental charts starting next week, although morbid curiosity could be a boon for Universal’s Cats and Dolittle now that both infamous bombs are available to rent for $6. The big variable is, of course, Trolls: World Tour, which will debut on digital this Friday after completely skipping the theatrical window due to coronavirus-related theater closures.

While we can expect a surge of immediate curiosity and interest, we’ll see to what extent the title continues to play (at a $20-per-rental rate), especially as the aforementioned early-2020 hits (Bad Boys 3 and Sonic) became available for $6-per-rental. Little Women and Jumanji: The Next Level is right behind Star Wars on Amazon’s physical media charts, again showing the luck/value in Sony not holding off on their biggest and best movies last year. Unlike a lot of studios, Sony didn’t hide from the expected Disney onslaught, so now it reaps the rewards of quarantined/isolated audiences relishing “was just in theaters” titles.

Bad Boys for Life, Little Women and Jumanji: The Next Level are benefiting (alongside Once Upon a Time in Hollywood) from folks wanting to see (or seeing again) Sony’s high-profile 2019 (or early 2020, yes, even Bloodshot) releases now that they are stuck at home. Conversely, Warner Bros., which delayed Wonder Woman 1984 from November of 2019 to June of 2020 (which seemed like the right idea at the time), has little in terms of “hot” recently released product. Although Birds of Prey isn’t exactly burning up the sales charts, although I hope more folks check it out now that it’s “priced to rent” as of this morning.

Top rentals from Google Play – Star Wars: The Rise of Skywalker, Jumanji: The Next Level, Bad Boys For Life, Sonic the Hedgehog, Onward, 1917, Contagion, Knives Out, Bloodshot, Spies in Disguise

Top Blu-Ray/DVD sales from Amazon – Star Wars: The Rise of Skywalker, Little Women, Jumanji: The Next Level, 1917, Dolittle, Joker, Frozen II, Harry Potter (eight movie collection), The Ten Commandments and Once Upon a Time in Hollywood

Top digital rentals and purchases from Amazon – Sonic the Hedgehog, Bloodshot, Jumanji: The Next Level, Bad Boys for Life, Onward, The Greatest Showman, Star Wars The Rise of Skywalker, Bombshell, Gemini Man, and The Gentlemen

Top digital rentals and purchases from FandangoNow – Bad Boys for Life, Sonic the Hedgehog, The Invisible Man, Star Wars: The Rise of Skywalker, Onward, Bloodshot, Jumanji: The Next Level, Birds of Prey, I Still Believe and Call of the Wild