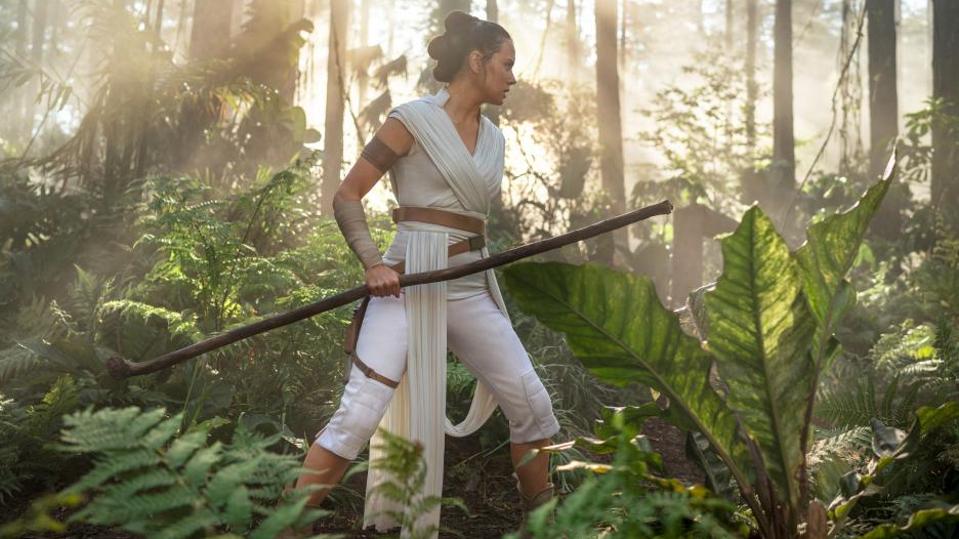 Walt Disney and Lucasfilm’s Star Wars: The Rise Of Skywalker is playing like a “normal” blockbuster as opposed to one with Christmas-enhanced legs.

Star Wars: The Rise of Skywalker topped the box office for the third weekend in a row, earning another $33.7 million (-53.1%) to bring its 17-day domestic total to $450.8 million. That puts it, sans inflation, right in between The Dark Knight Rises ($448 million in 2012) and Avengers: Age of Ultron ($459 million) on the all-time grossers list. It has also passed Frozen II ($449.9 million as of tonight) to become the year’s third-biggest domestic earner, behind The Lion King ($543 million) and Avengers: Endgame ($858 million). It has now earned 2.55x its $177 million opening weekend. If this were any other franchise opening at any other time, The Rise of Skywalker would be an unqualified success.

That we’re nitpicking its performance is due to A) poor reviews and mixed word-of-mouth, B) that Disney intends to keep making Star Wars movies even after the “end of the Skywalker Saga,” and C) that this Star Wars story opened in the mid-December arena which generally provides a boost in terms of multipliers and post-release legs. If it plays like the last three Christmas Star Wars releases from this point onward, it’ll earn between $535 million and $572 million domestic. That would be a multiplier between 3x and 3.24x, on par with Scream 2, I Am Legend and Eragon. It will (probably) be leggier than The Last Jedi (2.8 x $220 million) but its raw grosses aren’t big enough for that to be much of an advantage.

The Force Awakens was a unique situation, existing as a “32-years-later” sequel to Return of the Jedi with much of the original cast returning in some capacity. Couple that with strong reviews, buzzy new characters and a calendar that saw the film’s opening weekend lead right into the holiday break AND Christmas and New Year’s falling on a Friday, and well, that’s partially how you get $937 million domestic from a $248 million opening weekend. Prior to that, no December film had opened to even $85 million. The only December debuts above The Hobbit: An Unexpected Journey ($84 million in 2012) were the last four December Star Wars movies ($248 million in 2015, $155 million in 2016, $220 million in 2017 and $177 million in 2019).

Either the holiday break is preventing catastrophe or the size of the grosses have negated much of the holiday bump. As far as global grosses go, it’s over the $900 million milestone, with $468 million overseas for a $918.8 million global cume. It’ll still presumably top $1 billion next weekend, but it might end up just over the likes of Aladdin ($1.053 billion), Joker ($1.062 billion) and Toy Story 4 ($1.073 billion) among this 2019’s biggest earners. To the extent that the domestic earnings are “disappointing,” it’s partially because Disney knew that overseas audiences wouldn’t care as much about “the end of Star Wars,” and thus were counting on a 20% domestic boost from Last Jedi on par a conventional Star Wars threequel.

Presuming it ends up with $545 million domestic and $555 million overseas, that will be a 12% drop domestic and a 22% drop overseas from The Last Jedi, which would be a decent hold in most situations. Absent the expectations that come with Star Wars, even in a world run by MCU superheroes and Fast and Furious movies, and absent the presumptions of a mid-December release date, The Rise of Skywalker would be doing entirely okay. And in the broad scheme of things, my issues with the movie (and how it was seemingly made) notwithstanding, it still is. We’ll see what audiences will think of the next Skywalker-free Star Wars movie in December of 2022. But that would be a challenge no matter how well this Star Wars finale performed.