Breaking
Mayo Clinic And Kaiser Permanente Invest $100 Million...
MozCon Virtual 2021 Interview Series: Wil Reynolds
Commodity Spikes May Be Close To Peaking, Futures...
Benefits of Responsive Web Design
ESBC Major Updates: Tons Of Heavyweight Greats Added...
5 On-Demand Courses To Help Develop Your Leadership...
How to Run Nonprofit Marketing Ads
Entrepreneurs Are Bringing Transparency To Home Buying And...
Best Incentive To Get Vaccinated: Money, Messaging, Or...
Page Level Query Analysis at Scale with Google...
How A CIO Can Align IT With Business...
Blogger of the Month: Jo, Girl Eats World
6 Things Women In Business Know That Men...
How to Use First-Party Data for Ad Personalization
Pressing Reset—Putting A Fallen Unicorn Back On Its...
How We Went Viral: Promoting Content with Influencers,...
Home Technology ‘Star Wars: Rise Of Skywalker’ Novel Reveals Palpatine Was A Clone, Raising Serious Questions
Technology

At this point, honestly, I just want to stop thinking about Rise of Skywalker, but dumb stuff keeps making headlines that I can’t seem to escape. The latest update comes from the novelization of Star Wars’ final Skywalker film, written by Rae Carson.

A novelization of a Star Wars movie is often more than simply translating the script from screen to page, and often adds more detail to the story where the film couldn’t, or didn’t want to elaborate. That’s what we’re seeing here now with Rise of Skywalker, which has just confirmed the pretty important fact that the version of Palpatine we saw as the big bad of the final film was not his original version, but was instead, a clone.

Here’s the relevant passage gleaned from early copies of the book, which relays what was going through Kylo Ren’s head in the opening moments of the film:

“All the vials were empty of liquid save one, which was nearly depleted. Kylo peered closer. He’d seen this apparatus before, too, when he’d studied the Clone Wars as a boy. The liquid flowing into the living nightmare before him was fighting a losing battle to sustain the Emperor’s putrid flesh.

“What could you give me?” Kylo asked. Emperor Palpatine lived, after a fashion, and Kylo could feel in his very bones that this clone body sheltered the Emperor’s actual spirit. It was an imperfect vessel, though, unable to contain his immense power. It couldn’t last much longer.” 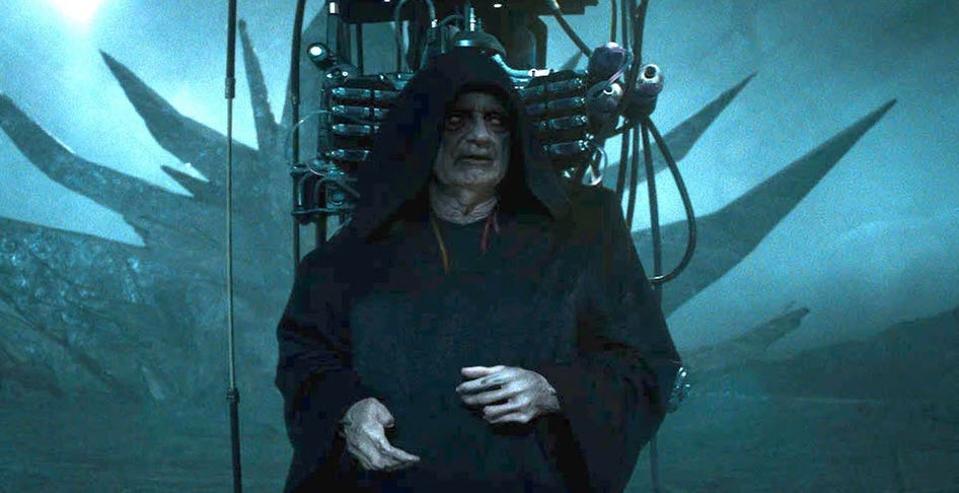 The film is simply content to describe the Emperor’s return as a combination of science and Dark Side power, but the idea that he’s an actual clone is not discussed or really even hinted at (depending on how take his “I’ve died before” line, I suppose).

It does kind of solve the problem of “how does the Emperor survive being hurled down a bottomless pit in a space station that subsequently explodes?” as that never made a whole lot of sense unless you were just hand-waving it away with “well, the Dark Side.”

And yet the film clearly portrayed the corpse-like Palpatine as just that…a corpse brought back to life, not a clone body degraded by too much Dark Side power. Presumably we’re supposed to believe that perhaps the Emperor had some sort of failsafe plan in place for his death where he’d be cloned and resurrected if his original form died. And then I guess his Dark Side spirit uh, flew from the second Death Star and into that clone…wherever it was.

Before Rise of Skywalker, there was a lot of speculation about cloning being an answer to many of the central questions of the trilogy. Some people assumed that Snoke was a failed clone of the Emperor (and after this reveal, that theory seems like it could have even more weight), while others assumed that Rey was either a Palpatine-grown clone of Luke Skywalker, or a Palpatine grown clone of…himself, obviously with the gender flipped.

Rey instead turned out to be Palpatine’s naturally born granddaughter (thanks to a son we never knew he had until now), but now some fans are saying that this reveal sort of negates that, as Rey was the granddaughter of the original Palpatine, not this clone variant, which makes the entire final conflict carry less weight.

To me, all this just screams how ill-conceived and last-minute the Palpatine addition to the film was. It’s pretty clear at this point that Palpatine returning as the villain was never planned until JJ Abrams took over the final film and they needed a big bad to close it out. They were content to bring him back and not really explain too much, but now subsequent fiction has added detail to that story. Detail, that I would argue, is probably just making the concept even worse, and they should probably just call it a day on over-explaining stuff that was improvised in the first place.

Will this be the last Rise of Skywalker reveal? God, I hope so, but I wouldn’t count on it.