Breaking
The Biggest Scandal On Social Media Right Now...
Don’t Hold Your Breath For Biden’s Big Stimulus...
The Rise Of Substack—And What’s Behind It
Be Smart When Shopping For Additional Medicare Advantage...
Finally! The SBA Releases One-Page PPP Loan Forgiveness...
3 Tips To Get Your Website To Work...
Netflix Releases 4th Quarter 2020 Earnings: How Much...
How To Make Entrepreneurial Education 16x More Productive
11 Strategies For Praising Employee Work (Without Causing...
Starbucks Steps Up Its Racial Justice Outreach With...
Startup Surge: Pandemic Causes New Businesses To Double
Consumer Psychology Lessons From Carnival
Is Success Making You Lazy?
AT&T Stock Will Not Go Back To Its...
2021 CES Consumer Storage
Senator Marco Rubio Called Out Twitter For Its...
Home Business Stars Of It Chapter Two And Terminator: Dark Fate Talk Film Franchises At Days Of The Dead In Chicago
Business 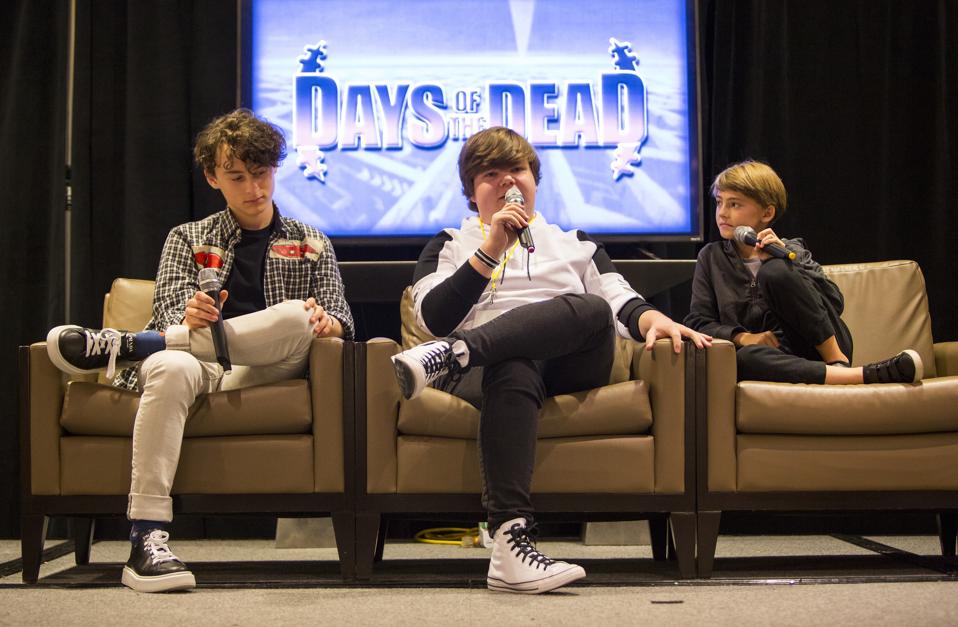 (Left to right) Actors Wyatt Oleff, Jeremy Ray Taylor and Jackson Robert Scott discuss the It … [+] franchise during a Days of the Dead panel discussion. Saturday, November 23, 2019 at the Crowne Plaza Hotel in Rosemont, IL

“How do I put this… I want to say thank you to the people who have watched my films,” actor Richard Dreyfuss told Forbes in January during a meet and greet preceding a screening of the 1975 film Jaws in Downers Grove, Illinois.

The Oscar winning actor was back in Chicago mingling with fans and posing for selfies last weekend as part of the Days of the Dead convention, which tours the country celebrating American pop culture, horror in particular.

Jaws, which grossed over $470 million on a $9 million budget is generally looked upon as the original summer blockbuster and provides a great example of the type of fare celebrated at Days of the Dead.

Featuring panel discussions, a fan swap meet, convention floor, karaoke and more, Days of the Dead puts fans closer to celebrities than any other convention in an increasingly crowded market.

Two film franchises with the biggest presence at Days of the Dead Chicago, It and Terminator, both released their latest editions in the last two months.

From the cast of It Chapter Two, child actos Chosen Jacobs, Jackson Robert Scott, Jeremy Ray Taylor and Wyatt Oleff spoke during a Saturday panel about the art of intelligently creating suspense in a modern horror movie.

“I think one of the keys to making a horror movie is not making bad decisions,” said Scott, mocking the stereotypical characters and plotlines that often drag down films in the genre. “The key, in my opinion, is, ‘Why did you go there?’ We see the monster or whatever it is. That’s what makes it scary. I at least want logical decisions,” explained the actor.

Oleff agreed, citing The Shining as an example of a horror film that utilizes logic and masterfully builds suspense. 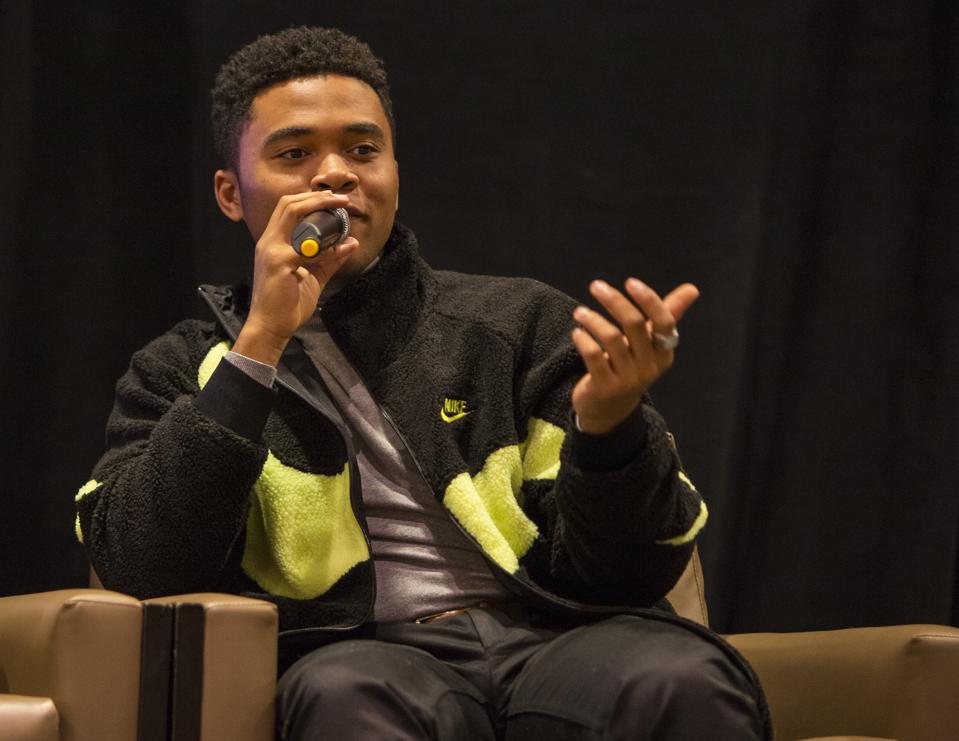 Actor Chosen Jacobs discusses the It franchise during a Days of the Dead panel discussion. Saturday, … [+] November 23, 2019 at the Crowne Plaza Hotel in Rosemont, IL

Jacobs spoke about the original Stephen King novel and credited the screenwriters of It Chapter Two for creating relatable, authentic characters.

“I think that’s kind of the fun of it. You actually love the characters – so when things happen you actually care,” Jacobs said. “That’s great writing from Stephen King and our screenwriters. And, like Jackson said, logic and reason.”

Terminator: Dark Fate was released on November 1 and actors Michael Biehn and Edward Furlong were on hand to discuss it in Chicago at Days of the Dead.

Furlong made his on screen return to the John Connor character in Dark Fate, the sixth installment of the Terminator franchise.

It’s the character that launched his career following the massive success of Terminator 2: Judgement Day, which, as the then most expensive movie ever made, grossed over $500 million worldwide following its 1991 release.

But the troubled actor was replaced by Nick Stahl, who portrayed Connor in the 2003 picture Terminator 3: Rise of the Machines.

“I got into things that weren’t good for me – for a long time,” said Furlong of losing the role, measuring his response to a question posed by a young fan during a Sunday panel. “I was a kid who had a lot happening all at one. And I wasn’t really able to process it.” 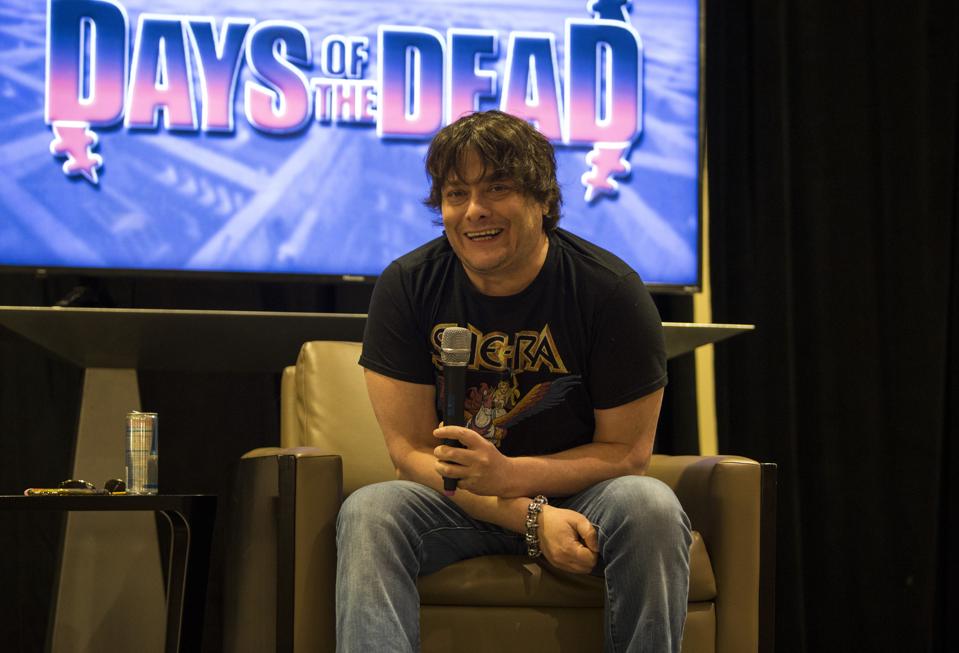 Actor Edward Furlong discusses his role in the Terminator franchise during a Days of the Dead panel … [+] discussion. Sunday, November 24, 2019 at the Crowne Plaza Hotel in Rosemont, IL

Furlong spoke openly and candidly about the highs and lows of his career, from working with artists like Aerosmith and Metallica in music videos to directors like John Waters (Pecker) and James Cameron (Terminator), who applied de-aging technology to Furlong’s performance in the new Terminator film.

But he saved his highest praise for Terminator star Arnold Schwarzenegger.

“I grew up watching Predator and Total Recall. I really looked up to Arnold throughout that whole movie,” said Furlong of filming T2. “Out of all the actors I’ve worked with, he is an amazing role model. And I still look up to him. I really do.”

The actor was in good spirits and joked about his skills during the panel, saying, “I’m not Daniel Day-Lewis.” Furlong also best summed up the convention experience.

“Basically, my job is to sit on my a— and sign autographs and let people tell me how awesome I am,” he joked. “The fact that I can do that is both awesome and wrong at the same time.”