Breaking
Here’s What You Need To Know About AstraZeneca’s...
Mini Gifts: What To Get For Your Colleagues...
Report: Biden Picks Janet Yellen For Treasury Secretary
Policy Priorities
Eight Key Steps To Landing Your Product In...
How Much Room Is There For E-Kick Scooter...
Why We Must Update The Law For The...
The Tax Rules For Home Businesses And Working...
How To Use The ‘E.R.I.C.’ Framework To Tackle...
‘Destiny 2: Beyond Light’ Review: A Frozen Triumph
Five Steps To Faster Market Research
What’s The Upside For NetApp Stock?
Why Automated Machine Learning Is Becoming A Must-Have...
Is The Caruso 2020 A Serious Challenger To...
Your Smartphone Is Costing Your Fortune
Ignoring Climate Related Physical And Transition Risks Imperils...
Home Technology Steam Games: Report Says 80% Earn Under $5,000 In 1st 2 Weeks
Technology 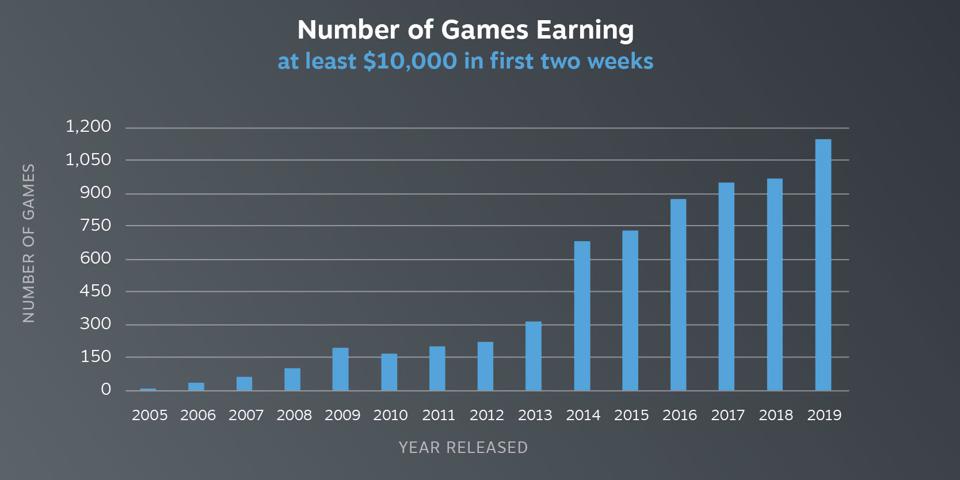 Steam’s figures on games earnings are positive but is there more to the story?

Steam is a useful and well-loved games platform, an easy-to-use portal for casual and committed gamers to find the titles they want and start playing. It’s the largest online PC game seller in the western world.

But exactly who’s playing what and how much game developers are earning has been hidden for a while, since Valve changed its privacy settings. This happened well over a year ago, and led to Steam Spy, which had been estimating how many people owned which games, being unable to make its calculations.

Now, Valve has released some data in what it describes as a deep dive, and says that the games earning $10,000 or more in their first two weeks has gone up every year since 2011. The number making that amount in 2019 was three times the figure in 2013, Valve says. It admits that earning prospects for most, but not all, games improved last year. More releases than ever, it says, are finding success.

All well and good, but a new analysis by Ars Technica suggests this is only a partial indication of what’s going on. The new report says that what Valve has said leaves out a huge number of games which are earning less, specifically less than $5,000 in the first two weeks that the games are available.

Ars Technica’s Kyle Orland has taken Valve’s graphs and used photo editing software to convert the graph bars into actual numbers. Even though this process could be slightly inaccurate, Orland says, he believes it’s not by more than a fraction of a per cent. 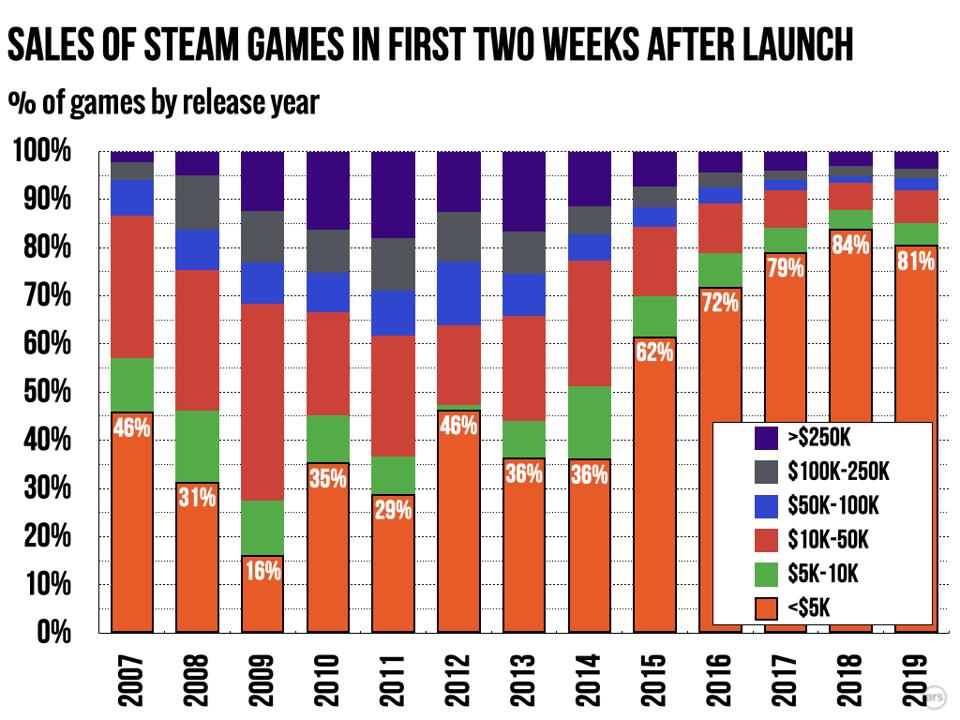 From these measurements, Orland was able to work out the one piece of data that Valve had not gone into, the games with those lower debut earnings. Ars Technica’s estimate is that while back in 204 only just over a third of games were failing to earn more than $5,000 in their first two weeks, in 2018 and 2019 the games earning less than five grand were 84% and 81% respectively.

Partly, the numbers went up as a result of the introduction of Steam Greenlight which meant the tight control on what could be sold on Steam was loosened, which happened in 2012.

And earning $5,000 isn’t an out-and-out failure. For an indie developer making their first title, $5,000 could be a promising start. And while the first two weeks’ sales are important, they’re not the whole story. Valve says that most games recently which earned $10,000 in their first two weeks went on to earn between $20,000 and $60,00 in the course of the year that followed.

But there’s some truth in Ars Technica’s analysis that having your game on Steam doesn’t mean a guarantee of a big audience. Maybe there are now so many games that getting to the one that interests you is harder now.

Many games are earning way more than $5,000, but the fact that so many are making less than that is a sobering thought for developers.