Breaking
Mayo Clinic And Kaiser Permanente Invest $100 Million...
MozCon Virtual 2021 Interview Series: Wil Reynolds
Commodity Spikes May Be Close To Peaking, Futures...
Benefits of Responsive Web Design
ESBC Major Updates: Tons Of Heavyweight Greats Added...
5 On-Demand Courses To Help Develop Your Leadership...
How to Run Nonprofit Marketing Ads
Entrepreneurs Are Bringing Transparency To Home Buying And...
Best Incentive To Get Vaccinated: Money, Messaging, Or...
Page Level Query Analysis at Scale with Google...
How A CIO Can Align IT With Business...
Blogger of the Month: Jo, Girl Eats World
6 Things Women In Business Know That Men...
How to Use First-Party Data for Ad Personalization
Pressing Reset—Putting A Fallen Unicorn Back On Its...
How We Went Viral: Promoting Content with Influencers,...
Home Business Stefon Diggs And Buffalo Bills Seem To Be A Match Made In Heaven
Business 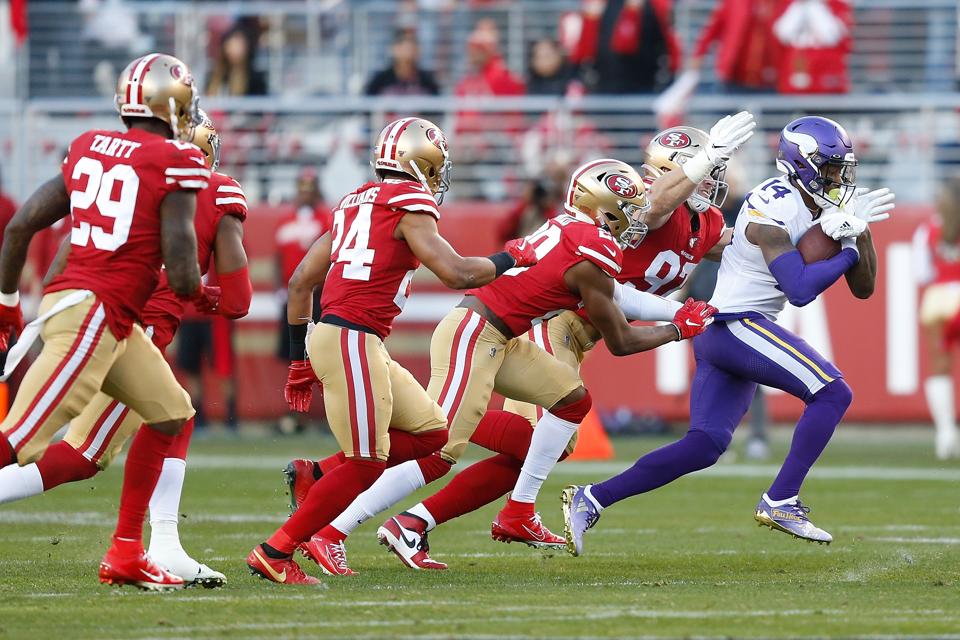 SANTA CLARA, CALIFORNIA – JANUARY 11: Stefon Diggs #14 of the Minnesota Vikings is tackled by Nick … [+] Bosa #97 and Jimmie Ward #20 of the San Francisco 49ers in the fourth quarter of the NFC Divisional Round Playoff game at Levi’s Stadium on January 11, 2020 in Santa Clara, California. (Photo by Lachlan Cunningham/Getty Images)

The Buffalo Bills management team seems to have a love affair with undersized receivers.

Last year they acquired free-agent receivers Cole Beasley and John Brown, who would become The Smurfs of the NFL club. But despite both being under six feet, they were dependable targets for quarterback Josh Allen in helping the Bills (10-6) get into the playoffs for only the second time since 1999.

In fact, Brown had a career year with 1,060 yards and Beasley wasn’t far behind with 778 yards while adding a career-high six touchdowns.

This off-season, the club added to their passing arsenal by acquiring undersized Stefon Diggs from the Minnesota Vikings in March, along with a seventh-round pick this year, in a trade that cost Buffalo a first-round draft pick in 2020, fifth and sixth-round picks in 2020 and a fourth-round pick in 2021.

Diggs will carry a cap hit of $11.5 million this year (the second highest on the club next to center Mitch Morse), with three more years after that at $12 million.

Some thought this was too high a price to pay because the upcoming draft class is especially deep at receiver, and picking at No. 22, the Bills surely would have been able to land a promising pass-catcher.

But the Bills decided that it’s better to get an experienced receiver than some college player who may take years to develop into a top-tier pass catcher. And that’s even though fans have been clamoring for Buffalo to acquire a big-bodied receiver who can be the sure-fire No. 1 target for Allen.

Diggs isn’t that small by at 6 feet and 191 pounds. But he’s an elite receiver mostly because of his speed and skills in the open field. But many fans were hoping the club would put their efforts into acquiring someone in the 6-4 or 6-5 range who had enough speed to catch up to Allen’s long throws.

To acquire Diggs, the Bills took advantage of the fact Diggs had worn out his welcome in Minnesota. In the last year, despite having career-high production numbers, he was fined for missing Vikings meetings and practices. That sparked the trade rumors.

The Bills liked Diggs’ numbers. Who wouldn’t be impressed by them?

Diggs is coming off back-to-back 1,000-yard seasons. In 2018, Diggs caught 102 passes for 1,021 yards, with an average reception going for 10 yards. He was a scoring machine with nine touchdowns. Last year, Diggs gathered in 63 receptions for 1,130 yards with his average catch going for 17.9 yards. He added six touchdowns.

Diggs appears to be the long threat the Bills needed last season. Diggs’ longest catch was for 75 yards in 2018, and last year, he hauled in a pass for 66 yards. These are numbers that should establish him as the No. 1 receiving threat in Buffalo.

And the best part of Diggs is that he might not have reached his peak at only 26. Meanwhile, Brown and Beasley are both 30 and likely on the downside of their careers.

The Bills also like the fact that Diggs does not turn the ball over. In three years prior to 2019, Diggs had not given up a single fumble. Last year was an aberration when he coughed up the ball four times.

Buffalo fans hope to see sparks when he and Josh Allen team up. Diggs has big-play ability and is perhaps best known for the “Minneapolis Miracle” when he scored a last-second, game-winning TD catch to send the Vikings to a victory over the New Orleans Saints in the NFC divisional round and into the NFC Championship game in January, 2018.

It’s hard to believe, looking back, that Diggs was a fifth-round draft pick of the Vikings in 2015. For that reason, the price may well be worth it for Buffalo.

Diggs is already going out of his way to endear himself to his Buffalo teammates and the fans. On Friday, he wrote about his trade in a Players’ Tribune first-person account. What stood out was his excitement to be playing with a quarterback like Allen.

Diggs recalled the first time he saw Allen play. That was in 2018 during a Week 3 matchup with the Vikings. Despite being huge underdogs, Buffalo thumped Minnesota 27-6.

The play that stood out for Diggs was Allen dropping back and then taking off up the middle of the field and leaping over linebacker Anthony Barr for a first down. Allen’s celebration made an impact on Diggs.

“I remember being on the sidelines,” Diggs wrote, “thinking O.K, this guy’s got some moxie. He just had a ton of energy and played with so much passion. And anybody who knows me knows that I’m a passionate guy.

“I wear my heart on my sleeve and I give everything I got every time I step onto the field. I could tell right away that Josh Allen was the same type of player. So once I found out about the trade, I couldn’t wait to go to work with him.”

As Diggs will discover, Buffalo has more going for it than wings. The #BillsMafia is perhaps the most passionate fan base in the NFL and Diggs fits in perfectly because he is not afraid to let his passion show. As Diggs said himself, Buffalo is a team ready to be great and do something special.

That’s why Diggs’ arrival in Buffalo makes this a match made in heaven.

A Reminder That ‘Fallout 76’ Is About To Become ‘Fallout 4.5’ With ‘Wastelanders’ Expansion