After Monday’s 12% decline and largest-ever single point daily loss, the S&P 500 Index has now given back all gains since Christmas Eve 2018. The bear market struck quickly, and the selloff is accelerating. Whether the large cap index holds current levels likely determines whether this bear market will be a mild one, or something more malevolent, possibly on par with the 2007-2009 bear market that accompanied the financial crisis.

The flicker of recovery we saw on Friday afternoon now appears evanescent. Stocks are stumbling anew even after Federal Reserve Chairman Jerome Powell announced on Sunday that the central bank is slashing the federal funds rate to a range between 0%-0.25%, and that it was launching a new round of quantitative easing, purchasing up to $500 billion in government bonds, and $200 in mortgage-backed securities.

The market’s foul reaction indicates that the monetary stimulus is not enough to stem the economic effects of the coronavirus contagion, or that the quickness of the Fed in unleashing its arsenal of monetary weapons means the problem is bigger than originally feared.

Stocks have value because of the earning power of the companies in which they represent ownership. Forecasting future revenue and earnings for companies will be foggy for the foreseeable future, as the economic impact of the extreme measures to slow the spread of COVID-19 are without precedent in modern U.S. history. Most economic models have not factored in probabilities of four or five months of social distancing and self-quarantine.

You wouldn’t need much computing power to hazard a good guess that the outcome of almost half a year of virtual shutdown will be a recession. Taken to an extreme, if job losses pile up, debts go unpaid, cars get repossessed, homes are sold at auction, and businesses with big debt loads and no revenue will scramble to keep creditors at bay. 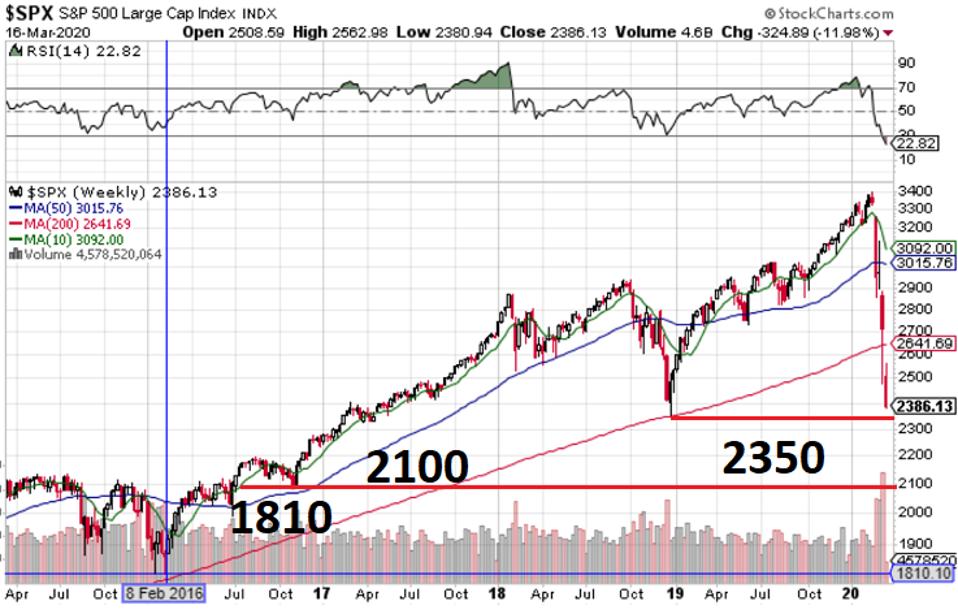 With the 200-week average pierced, the support level to watch now is 2350 at the lows of December 2018. This is a drop of less than 5% from current levels. If this level holds, a powerful rally may develop because of the deeply oversold market, shown by the RSI on the top of the chart.

Only 10 Non-English Albums Have Hit No. 1 In U.S. History, And Many Of Them Are By BTS

You Can Now Call The IRS To Ask...