Stocks Flat As Another 2.4 Million Americans File For Unemployment

The stock market opened slightly lower on Thursday, but futures cut losses even after another 2.4 million workers filed for unemployment, as investors continue to look ahead to a reopening of the country and economic recovery. 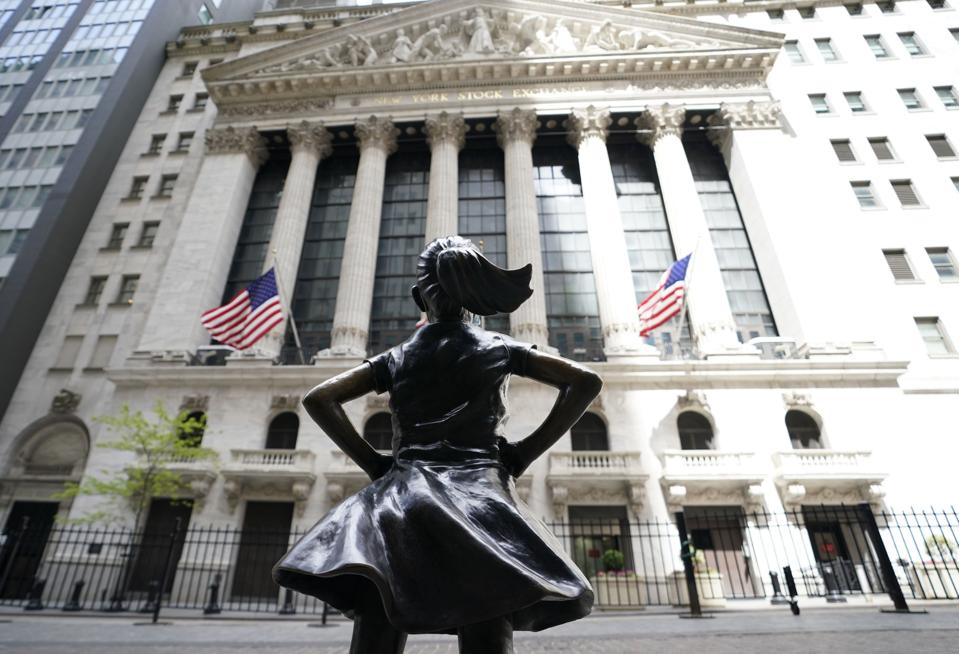 The market is still on pace for its best week since early April.

Timothy A. Clary/AFP via Getty Images

Another 2.4 million Americans filed for unemployment the week ending May 16, bringing the total number of job losses over the last nine weeks to more than 38 million.

The number of job losses, which were in line with Wall Street expectations, has been declining in recent weeks—but also signals that despite gradual reopenings across the country, workers are still struggling amid the coronavirus crisis.

Shares of Best Buy fell more than 3% after the retailer said its revenue and earnings fell in the first quarter, despite an initial surge in demand early in the pandemic.

Oil prices moved higher on Thursday, on track for their fourth straight week of gains, as West Texas Intermediate rose to trade at $34 per barrel—its highest level in more than two months.

Tech shares have been particularly strong performers, with both Facebook and Amazon hitting new all-time highs on Wednesday.

It’s been a volatile week for the market so far. Stocks jumped on Monday, fell on Tuesday and rose again on Wednesday. After the market rose more than 1.5% in Wednesday’s session, the S&P 500 hit its highest level since March 6, before the coronavirus downturn. The index is up 3.7% so far this week, while the Nasdaq NDAQ is up 4% and the Dow 3.7%.

“With a ninth straight week of new weekly jobless claims being counted in the millions, although at a lower level than before, one might be tempted to focus on the continuing decline,” says Mark Hamrick, senior economic analyst for Bankrate. “But at 2.4 million new claims last week, the seismic impact should not be dismissed because earlier shock waves were larger.”

There has been rising pushback against China among U.S. lawmakers, over trade and other issues related to the coronavirus pandemic. The Senate, by unanimous consent on Wednesday, passed legislation that would ban many Chinese companies from listing shares on U.S. stock exchanges. Entitled the Holding Foreign Companies Accountable Act, the bill would delist Chinese companies from the Nasdaq, NYSE and other exchanges for failing to follow U.S. securities laws.

Those tensions have also been amplified in recent weeks by President Donald Trump, who has accused China of being the main culprit behind coronavirus. He again criticized the country about its handling of coronavirus on Wednesday, blaming its “incompetence” for “this mass Worldwide killing.” His hard-line stance on China in recent weeks has some experts worried about a derailment of the phase one trade deal—something Trump has repeatedly threatened to do.

Global cases of coronavirus have now surpassed that milestone, according to data from Johns Hopkins University. The United States has more than 1.5 million cases confirmed so far.

Chinese Companies Must Play By American Rules Or Be Banned From U.S. Exchanges, Senate Rules (Forbes)

How Coronavirus Could Derail The U.S.-China Trade Deal (Forbes)