Breaking
Entrepreneurs Are Bringing Transparency To Home Buying And...
Best Incentive To Get Vaccinated: Money, Messaging, Or...
Page Level Query Analysis at Scale with Google...
How A CIO Can Align IT With Business...
Blogger of the Month: Jo, Girl Eats World
6 Things Women In Business Know That Men...
How to Use First-Party Data for Ad Personalization
Pressing Reset—Putting A Fallen Unicorn Back On Its...
How We Went Viral: Promoting Content with Influencers,...
Blame Olympic Record Price Tag For Return To...
Apple iOS 14.5 Release: Should You Upgrade?
How to Come up with Podcast Topics and...
Why Gaming Gear Company Razer Launched A $50...
Technical SEO Implementations to Increase the Impact of...
30 Brilliant Ways to Market Your Eco-Friendly Shopify...
15 Tech Industry Leaders Share Overused (And Misused)...
Home Finance Stocks To Trade In January
Finance

Cycles are of two types, static and dynamic. A static cycle is a rhythm that remains relatively unchanged, such as the tendency for the broad averages to rally in the spring, correct in the autumn and to rally in the last quarter. This approach can be applied to individual stocks. In October, Apple had risen over 70% of the time since 1980. If the weekly dynamic cycle rises in October, the likelihood of a higher share price is close to 80%. The two-cycle combination raises the probability of success. Indeed, Apple was recommended and did rise 11.07%, the second-best performer in the Dow in October.

The seasonal screen for the month is presented below. The number of years of data is in the last column. The % Times Return column shows the percent of months in which the stock rose. The Return column shows the average percentage gain in the month. The Expected Return column is the product of columns two and three. We can see that Walt Disney has been trading for 39 years and has risen in 76.9% of all Januarys. The average return has been 3.87% and the expected return is 2.98%. 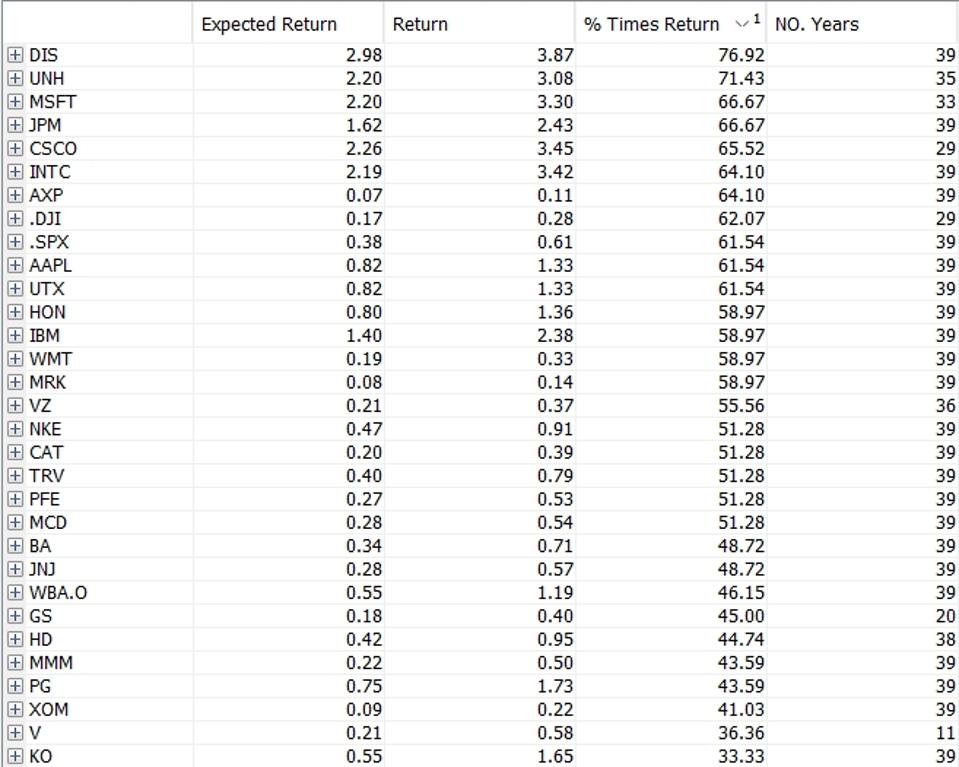 DJIA Stocks That Perform The Best In January

Of the top 15, these stocks show rising weekly dynamic cycles for at least 21 days in the month and are considered buys:

Regarding the weakest 15, these stocks show declining weekly cycles and are suitable short sales:

I add that the monthly cycle for the overall market decline in mid-January, so the shorts are favored in such a scenario.