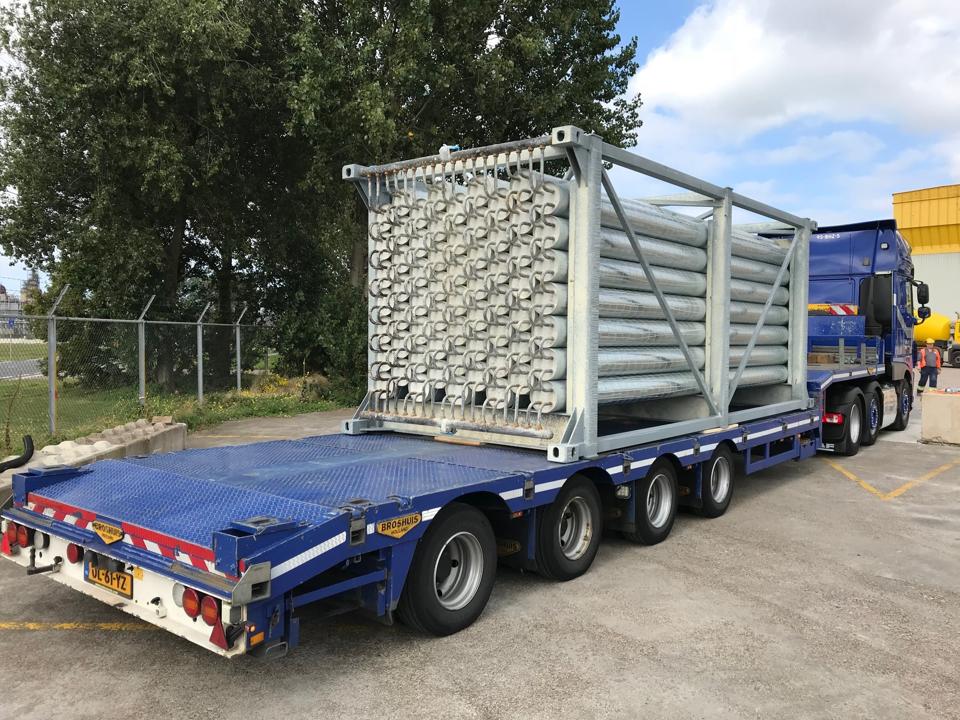 An Energy Nest heat energy battery being transported to site

As the global energy system becomes increasingly electric – not just in power but transportation and heat, too – storing energy is going to play an ever more important role in ensuring that clean energy can be used when it is most needed.

To date, most of the focus has been on storing surplus power generated by solar and wind farms, using battery technology or pumped hydro-electric facilities. But there is also a huge potential in storing heat, or thermal, energy in a similar way. The market for heat storage is more than three times the size of the electricity storage market, at about $300 billion, more than 3 times the total market for utility scale electrical batteries, according to Aurora Research.

While electric battery storage is aimed at power producers, particularly renewable energy schemes that produce energy intermittently from wind and solar power, thermal energy storage is aimed at industrial facilities that produce heat as a by-product of their operations, including steel and aluminium mills, cement, brick and glass makers as well as traditional power plants. It can also store energy from solar thermal, or concentrate solar power, plants.

“Thermal batteries will have a crucial impact on decarbonizing industrial sectors such as chemicals, petrochemicals, food and beverages, textiles, metals and minerals, by allowing industries that are electrifying to cut emissions to store waste energy or cheap off-peak generation to be used later, cutting their power costs,” according to the Italian oil and gas producer Eni. “They also make electrification a more viable option for companies with a range of heat energy requirements, and they enable businesses to use energy more efficiently by recovering waste heat, which cuts their fossil fuel consumption.”

Heat energy is more flexible than stored electricity, too. It can be used to generate electricity but it can also provide heat for homes through district heating schemes, or be used for preheating and to produce steam for industrial processes.

Norwegian company Energy Nest has come up with a way to store heat using a proprietary, concrete-like material that sits in a frame the size of a standard shipping container, says CEO Christian Thiel.

“The whole process is very asset-light. We don’t need much in the way of production facilities,” Thiel says. The frames are made in the Czech Republic and shipped to where they will be needed, where they are filled with tubes of what the company calls ‘Heatcrete’. “It’s a high-performance concrete that is 75% quartz, while the remaining quarter is a fiercely guarded trade secret, like the Coca-Cola recipe,” he adds.

Even so, the material can be made on site using existing equipment, which cuts the costs and emissions associated with transporting heavy materials over long distances. “We could build the batteries anywhere in the world.” In addition, there are no moving parts, no chemicals or materials that will degrade, meaning that the batteries have a life of decades once they are installed, unlike lithium-ion batteries, which have to be replaced after a few years. And they are modular so it easy to add capacity to existing sites.

Once the batteries are installed, Energy Nest uses intelligent operating software to ensure that the energy is used in the most efficient way possible.

After almost a decade of development, Energy Nest is starting to deploy its technology at scale. It has installed a pilot battery at an Eni solar thermal project in Sicily, while an Austrian brickmaker, Senftenbacher, is capturing the waste heat from a furnace and using it instead of gas, saving 1,500-2,000 tonnes of CO2 emissions a year.

Meanwhile, a Dutch open-cycle gas turbine power plant is to use an Energy Nest battery to store heat that will generate steam either for industry or to produce electricity, while Eni is considering using the technology at one of its gas power plants in Italy.

“Our main aim is to decarbonize industry,” Thiel says. “We help our customers to turn waste heat into a primary energy source so they can avoid using fossil fuel like diesel or natural gas. We can also help solar thermal projects to store energy from the sun and use it at night.”

Thermal storage is not in competition with electric batteries, which offers services such as frequency regulation, grid stability services and storage up to about four hours, purely for electricity networks. “We offer energy for between four and 12 hours so often we are complementary to Li-ion.”

Why AI Continues To Deliver Results In A Pandemic