“Summer Camp” Is Different But Regular Season Should Be Really Strange 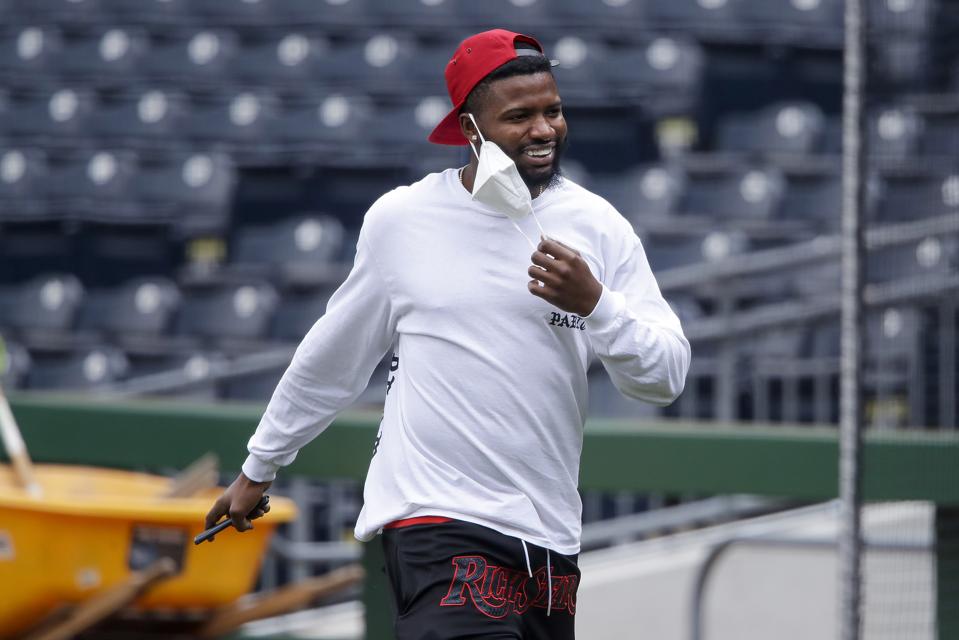 PITTSBURGH – To the untrained eye, the scene at PNC Park on Tuesday was no different than what often transpires inside the ballpark four or five hours before game time and long before the gates open to the fans.

Relief pitcher Geoff Hartlieb was pitching a simulated game, facing some of the Pittsburgh Pirates’ position players. Infielders worked on their defense, including bunt plays and cutoff plays.

However, there are certainly differences as Major League Baseball tries to begin its season during the COVID-19 pandemic. You can call it Spring Training 2.0 if you like but MLB prefers it be called “Summer Camp” – sponsored by Camping World.

The pitchers and position players each have separate dressing quarters to meet social distancing guidelines. The hitters are using the home team’s clubhouse while the pitchers have been moved down the hallway to the visiting team’s clubhouse.

Because Allegheny County recently instituted an order that prohibits gatherings or more than 25 people the Pirates have split their 60-man player pool into three groups.

Two groups are in Pittsburgh and work out separately at PNC Park each day. The third group is holding camp nearly 100 miles away in Altoona, Pa., home of the Pirates’ Double-A farm club.

“We’re getting used it the best that we can,” infielder Cole Tucker said following Tuesday’s workout. “It’s a crazy time in the world and everyone is making adjustments and trying to safe as we can.”

The real adjustments will come when the regular season begins. The Pirates are scheduled to open July 24 against the Cardinals at Busch Stadium in St. Louis.

Fans will be prohibited from attending games, at least initially, and the ban could stretch throughout the 60-game season. Playing in virtual isolation figures to be an interesting – and perhaps eerie – experience.

“It’ll be interesting, that’s for sure,” Pirates shortstop Kevin Newman said. “I really have no way to explain it. I don’t even know what it’s going to be like. We’ll have to find out. I guess it’ll be kind of like high school baseball where you only have a few people in the stands.”

Veteran Pirates left-hander Derek Holland enjoys interacting with the fans and admits the ballpark atmosphere will not be nearly as much fun without spectators.

And as far as possibly playing recorded crowd noise at the ballpark? Well, it is not a good idea to get Holland started on that.

“I’m sorry, you can pump in as much noise as you want but it’s not going to be the same,” Holland said.

No crowd noise also means every conversation on the field and in the dugout could be audible. Thus, it should be easy for teams to spy on their opponents.

First-year Pirates manager Derek Shelton says teams will need to be creative in trying to keep their communications private. He also admits creativity will probably not be enough.

“That’s why the defensive guys, knowing where they’re supposed to be, whether it’s cards or pregame conversations about where they should be defensively in their alignment will be is important,” Shelton said. “But every single sound is going to be heard regardless.”

Of course, the question of whether MLB can even pull off a season in this time of coronavirus remains to be seen. A handful of players have already decided to opt out and there have been snafus with the promptness of drug testing results that has forced some teams to cancel workouts.

The Pirates have not experienced any delays in their test results.

While pitcher Steven Brault understands the importance of frequent testing to help stop the spread of the virus, he says the procedure is somewhat yucky.

“Every other day or every third day we’re doing saliva tests where we spit into a little vial, which is absolutely disgusting because you have to fill the vial. It’s not like a little spit. It’s so much spit,” Brault said. “We get the results a few days later. It’s not too bad. We’re doing what we have to play.”

The Stock Market’s Most Extreme Bearish Sentiment Indicator: Not For The Squeamish

Kanye West Says He’s Done With Trump—Opens Up About White House Bid, Damaging Biden And Everything In Between

Reinventing Your Solo Business: For Right Now: The...

Will More Americans Buy A Home Because Of...

How The Coronavirus Is Impacting Small Business Owners

Vulnerable Leadership Inspired This Team To Pull Together...

Why Winning Companies Are Making Bigger Bets On...