Breaking
How To Use Content To Draw Others To...
Apple Loop: New iPhone 13 Leaks, Apple’s App...
25 of the Best Add-On Slack Apps to...
How to Resolve Duplicate Content
How Millennials Are Changing The Face Of B2B...
Bloggers of the Month: Kelly Jackson & It’s...
As Bitcoin Suddenly Surges Over $50,000, The Price...
In The Race To Retail Dominance, Customer Service...
Meet Onesimus, The Enslaved Man Who Saved Boston...
How to Build a Sales Forecast Model
The Unexpected Ways COVID-19 Has Forever Changed What...
Google Posts: Conversion Factor — Not Ranking Factor
How To Bring Your Branding To Life
Coinbase Cofounders And Investors Poised To Rake In...
How To Stay Top-of-Mind For Your Audience With...
Introducing The Chrome Extension: Get Share Counts, Links...
Home Business Super Bowl LIV: Early Odds, The Spread, And What Patrick Mahomes Has To Do To Take The Trophy Home
Business

Super Bowl LIV: Early Odds, The Spread, And What Patrick Mahomes Has To Do To Take The Trophy Home 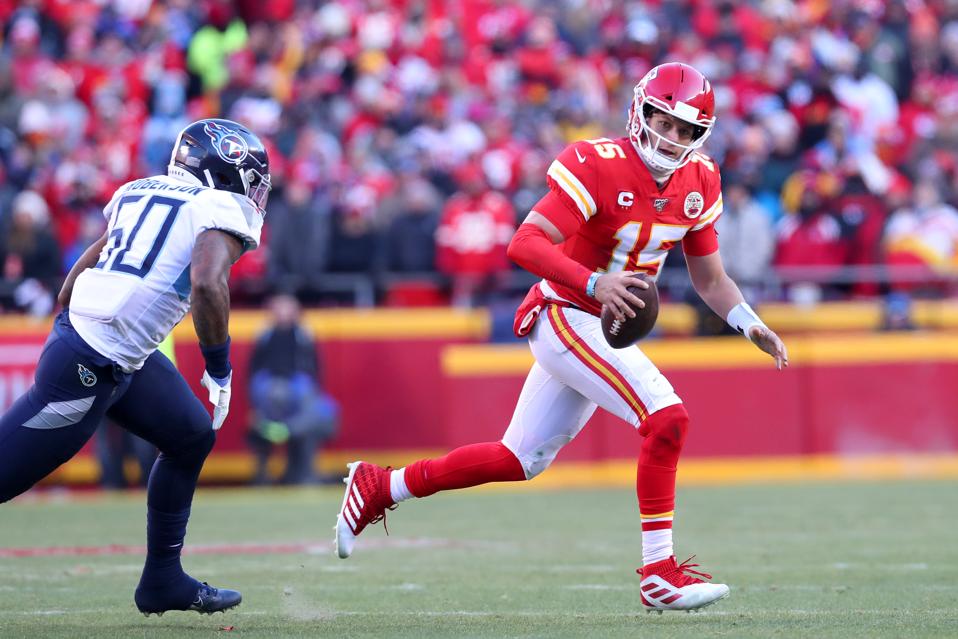 Dude, No Way You Gonna Catch Me: Patrick Mahomes #15 of the Kansas City Chiefs runs on his way to … [+] scoring a 27 yard touchdown in the second quarter against the Tennessee Titans in the AFC Championship Game at Arrowhead Stadium on January 19, 2020 in Kansas City, Missouri. (Photo by Tom Pennington/Getty Images)

If a “comeback rout“ is a possibility in pro football, it’s possible that we were just just had one demonstrated by a white-hot Patick Mahomes yesterday in a chilly Kansas City blowout over the Tennessee Titans. For their part, the 49ers mopped Green Bay out of the way rather handily, so it’s clear that the 49ers and the Chiefs are going to bring us a cliffhanger. The question will be what kind of a cliffhanger. The two quite evenly matched teams are forcing our beloved Vegas oddsmakers to cut the contest pretty fine, splitting hairs, in fact, to bring us Patrick Mahomes and his Chiefs as the very slight favorites.

For instance: The Mirage and Caesar’s Palace books both have the spread at +1 for the 49ers (-110 on that semi-underdog play) and -1 on the Chiefs (-110 on that bet). These razor-thin margins play out the same pretty much at oddsmakers across the board, give or take a half-point. We see an only slightly more clear delineation of the favorite on the straight-up moneyline at those two books, which have the nominal-underdog 49ers at +100 and the Chiefs at -120, respectively. The total has achieved some kind of weird Zen-like balance at 53.5 for the over and 53.5 for the under, with both books cementing those numbers at odds of -110, or at an implied probability of 52.4% of shaking out that way. 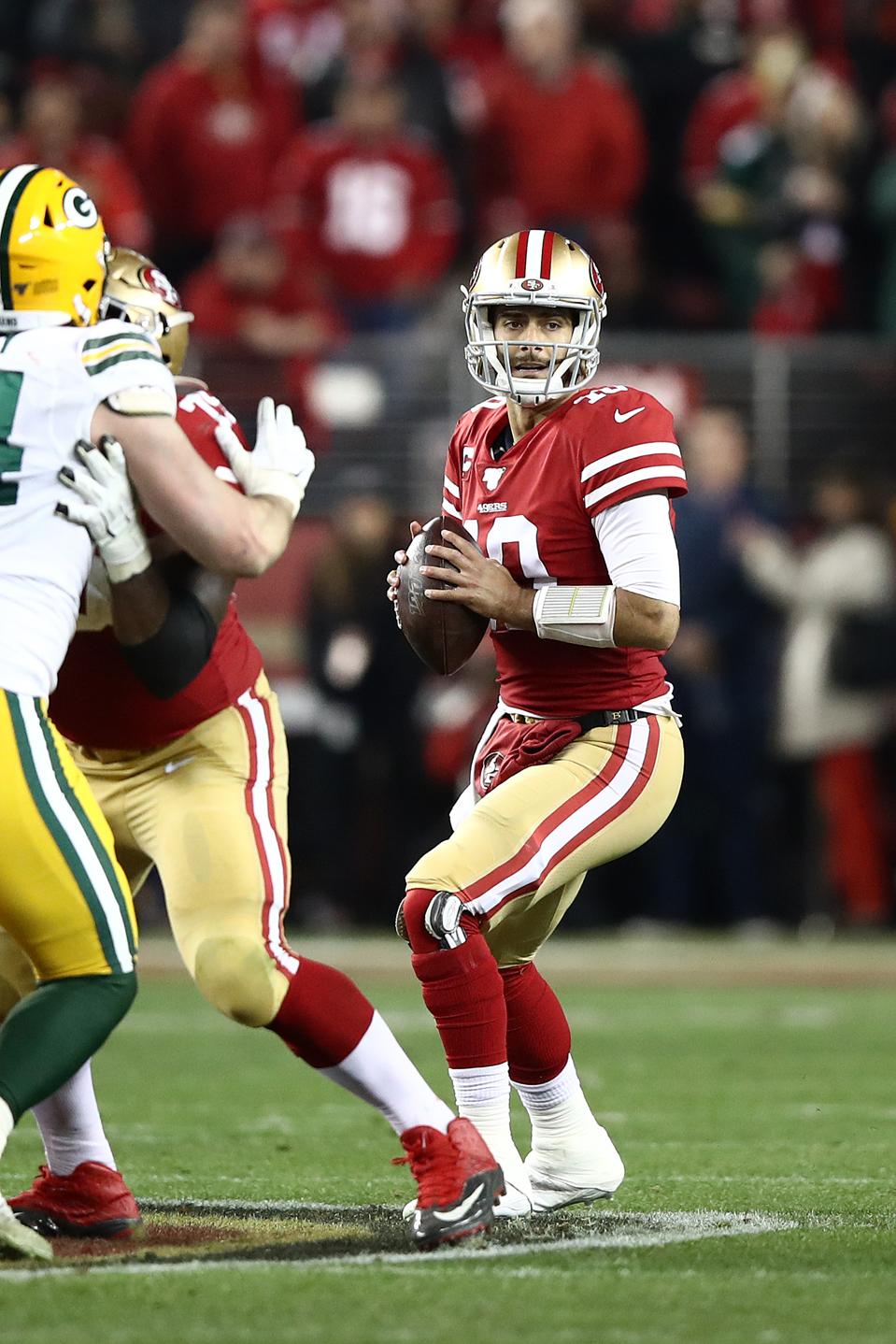 Long story short, given the 49ers defense and its rocking offense, it’s clear that Patrick Mahomes, Travis Kelce, Tyreek Hill, Sammy Watkins, Mecole Hardman, and Damien Williams will have quite a bit to do to make their point and take the Lombardi trophy back home, to the home of all those fine steaks and great barbecue.

Against a ”normal” team, say, the Tennessee Titans, Mahomes and his gentlemen of the offense need only the freedom to unleash and to play themselves. But the 49ers are not a normal team. First, the only tight end rivaling Kelce’s numbers in the NFL is…you guessed it: San Francisco’s George Kittle. Super Bowl LIV will bring competition as sharp as that.

Second, as hot as Mahomes is, Jimmy Garoppolo’s 102 quarterback rating is not to be sneezed at, and, as he led the team across the Rubicon into Super Bowl territory last weekend, he has long since fully put to bed the heebie-jeebies everybody had about him as a result of his anterior cruciate ligament tear earlier in the year. The came against the Packers yesterday was a fine demonstration of the necessity that, when called upon, Garoppolo could easily have the team put a game on his shoulders. His regular-season passing yardage (3,978) is a great number, and is clearly why the oddmakers are having trouble parsing the matchup at anything but even. The 49ers are not just a strong defensive team. They are in the Super Bowl because they score.

Despite that, the real reason that San Francisco is in the Super Bowl is that the team leads with their defense. This is another way of asking, can Patrick Mahomes and his fleet of high-flying receivers make the necessary surgical moves in the San Francisco secondary to make the long aerial bombardment result in scoreboard moves? Or, will San Francisco’s killer D stymie and frustrate the Chiefs’ phenomenal quarterback? These aren’t the questions that we bet when we bet this super-skinny Super Bowl LIV spread so much as they are at the very forefront of any moneyline play on this match.

20 Books to Inspire Your Happiest Life at Work