Breaking
5 TikTok Growth Hacks You Need To Know
Zynga Stock Looks Attractive At $9
How Russian Thieves Use Dark Web To Get...
France Off Travel Corridors And FCO Exempt List
Ask Ethan: Why Are The Moon And Sun...
When To See The Moon And The Planets...
IRS-CI Involved In Largest-Ever Seizure Of Terrorist Organizations’...
The Check Really Is In The Mail. After...
Epic Games Vs Apple: Why You Won’t Be...
Senator Kamala Harris Proposed A Bold Tax Credit...
Deal Terms To Reduce The Risk When Buying...
Multiple Sclerosis Drug Shows Promise For HIV Prevention...
The Neglected Piece Of Retirement Planning
It’s No Longer A Viable Option For Capitalism...
Virtual Credit Cards: An Extra Layer Of Protection...
Lessons From The Rainforest: Human Health Leads To...
Home Technology ‘Super Robot Wars X’ Switch Review: All The Isekai
Technology 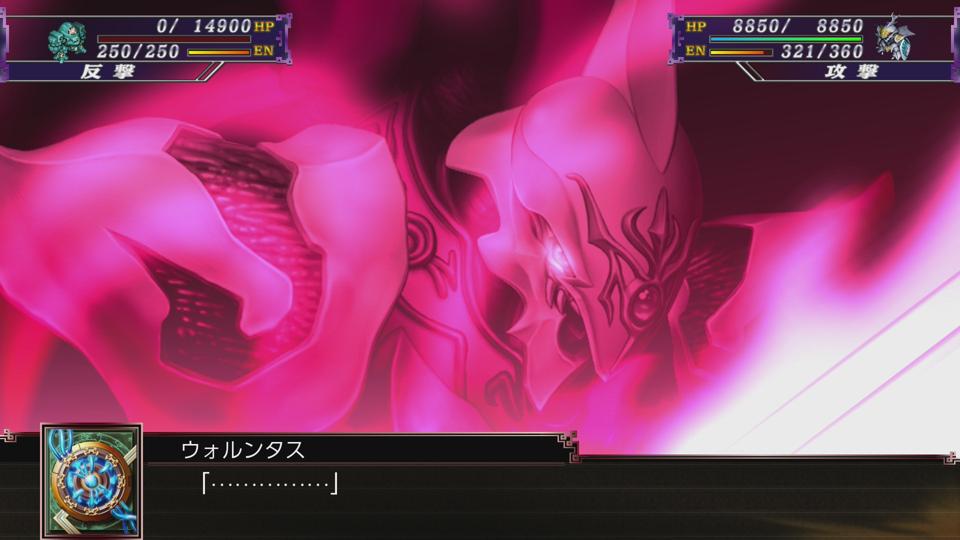 The Sirbine is a monstrously powerful unit in the game.

Following the Switch releases of the excellent Super Robot Wars V and T, we now have a Switch port of the middle entry, in the form of Super Robot Wars X. While V focused more on space-oriented series, X takes a more fantastical approach and makes for an interesting mix of classic turn-based strategy and isekai mecha anime.

If you are not familiar with the term isekai, it refers to stories that have protagonists from our world magically transported to some kind of fantasy realm. So instead of more space type mecha anime that is often typical for more recent Super Robot Wars games, X takes a more magical and alternate world approach.

This game also saw the return of arguably the defining isekai mecha anime series, that of Aura Battler Dunbine. While the 3DS entries of Super Robot Wars UX and BX included Dunbine, X has an even greater focus and also includes aura battlers from the follow-on OVA, such as the very elegant Sirbine (shown above). 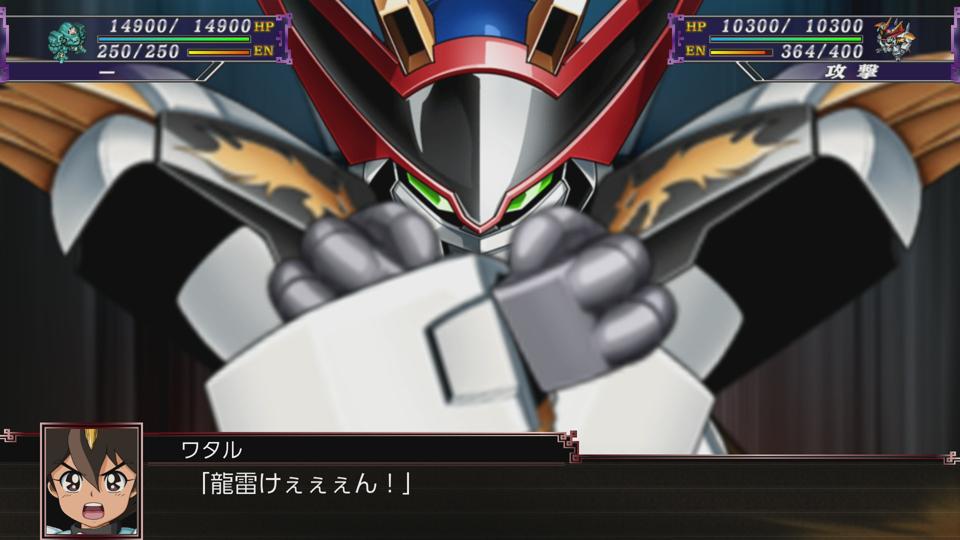 Following this, the OG mecha in the game also have a decidedly magical bent, with the unique mecha Xelguard representing the game’s main story but we also have the reappearance of the classic Cybuster, which is is somewhat of Dunbine homage in and of itself.

Though one of the biggest isekai additions in X is that of Mashin Hero Wataru (shown above). This was a hugely popular isekai mecha anime during the 90s and also had a positively massive following across a lot of Asia, especially in China. It also followed on from series like Granzort, by having smaller chunkier mecha that borrowed design elements from the super-deformed style.

The fact that it took this long for Wataru to be featured in Super Robot Wars is beyond me but its treatment in X is handled beautifully, with some genuinely fantastic animations for its various attacks. 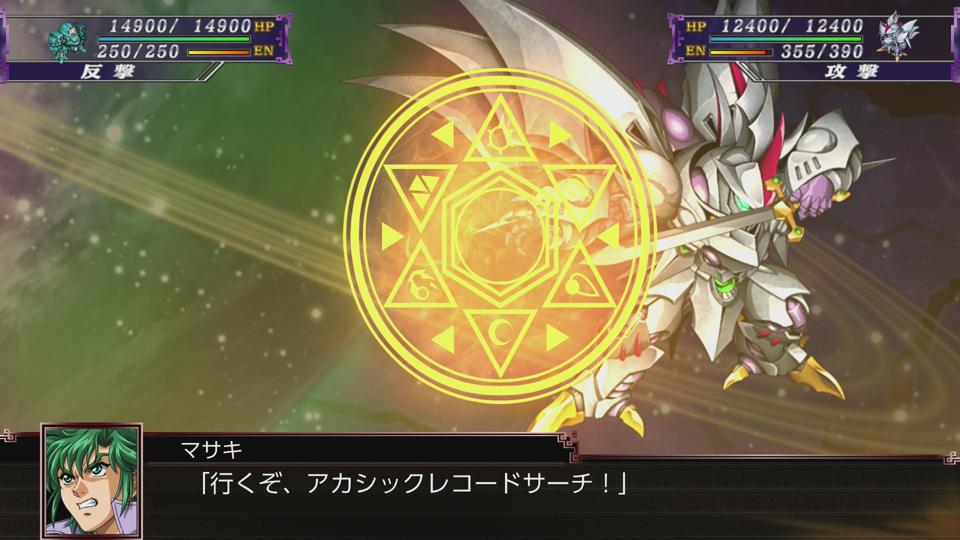 The Cybuster is a classic OG unit that fits the isekai theme here very nicely.

Much like Super Robot Wars V though, X follows-on functionally both in terms of the back-end tactical role-playing game setup and the in-game combat. In that, between missions you upgrade your mecha with money and parts and the pilots with skills and other abilities. Once in game, you position your units across a large virtual board and attack enemies in a turn-based fashion, with your pilots gaining experience and levelling up as they go. Again, you also retain your seishin abilities and the new Extra Commands and Orders.

So if you enjoyed Super Robot Wars V, then X is functionally very much a continuation though with a more magical context.

As this is part of the new wave of Super Robot Wars games, we also have a standalone battleship included in X, with this being the amazing Neo Nautilus from Nadia: The Secret of Blue Water (shown below). 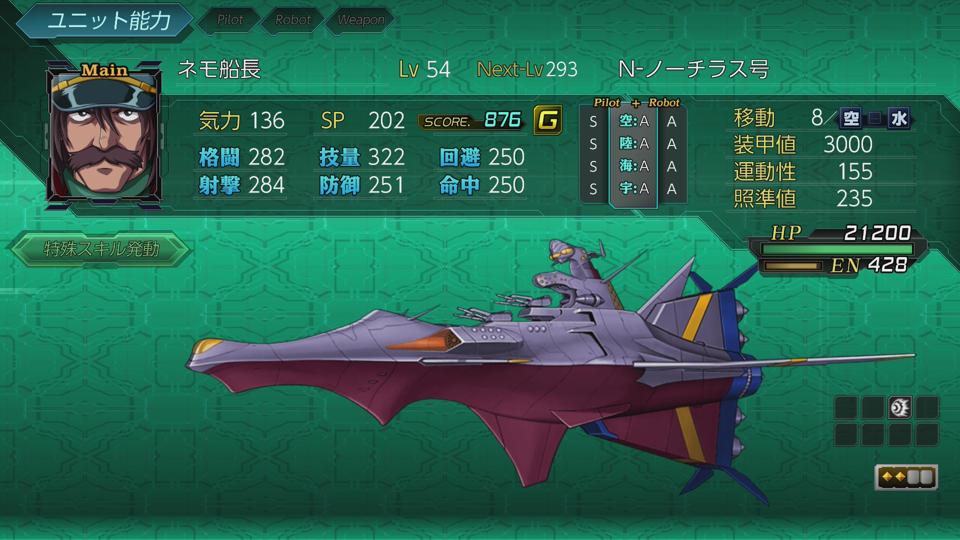 The Neo Nautilus is handled very well in the game.

The Neo Nautilus, like the Yamato before it, is a very powerful unit and once upgraded is pretty much unstoppable. The animation for its attacks are also brilliantly done and capture the feel of the anime in a truly wonderful way.

Talking of Gainax related classics, we also see the return of Gurren Lagann (shown below) and the animations for that too are suitably excessive.

Following on in the isekai theme, we also get a few more alternate takes from Gundam, namely the inclusion of the Hi-Nu Gundam and the Nightingale from the novel Beltorchika’s Children. As this was a retelling of events from the movie Char’s Counterattack, it’s a nice fit here among the other isekai shows.

As for this new Switch port, it’s very well done and very close to the original PlayStation 4 game. If I am honest, while I finished the PlayStation 4 version back when it was originally released, I have played this Switch version far more. Mainly because I think that the game is definitely more suited to portable play. To the extent that I have currently played through the game around seven times as of writing this. 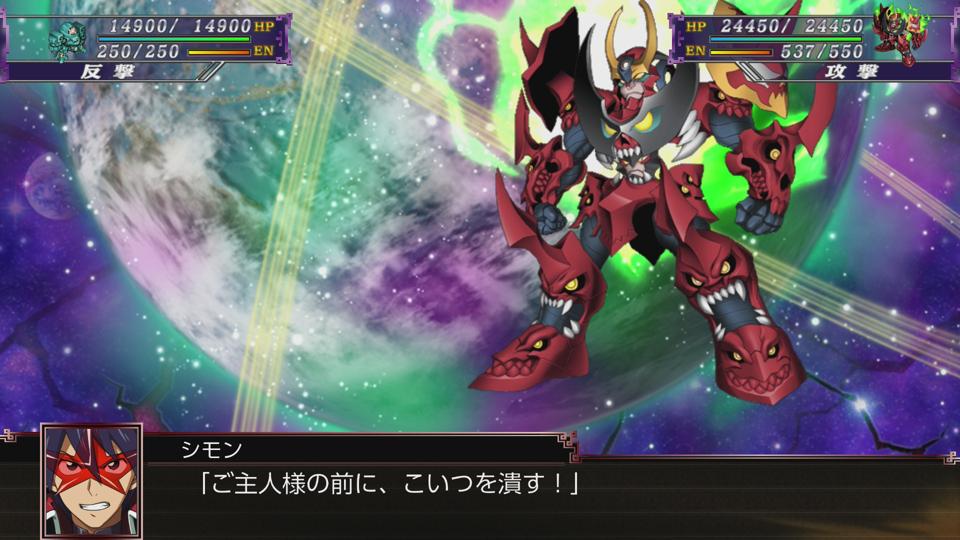 The return of ‘Gurren Lagann’ is very much appreciated.

This is because while the unlocks on the PlayStation 4 version were an obvious attraction, finding the time to sit down and play the game at home was difficult. The Switch bypasses that issue entirely and I have gleefully rinsed the game thoroughly multiple times over as a result.

To clarify, the multiple playthroughs are done to cumulatively build your money and pilot skill upgrade points. This means that each time through, you can max out more units and pilots. Not to mention build on the various magical upgrades, which can have to be bought on the first few concurrent playthroughs.

Overall, this is one of the best recent entries to the Super Robot Wars games and having it on the Switch makes it all the more compelling and convenient, not to mention being more in line with the portable history of the series. So if you like a healthy dose of fantasy themed mecha anime and some classic Gainax shows, then Super Robot Wars X is for you and, of course, those that are fortunate enough to remember the tale of Byston Well.

Disclosure: I purchased all versions of the game with my own money for the purposes of this review. The version reviewed is of the premium sound edition but the standard version is functionally identical.

Tyson Fury Stuns Deontay Wilder, And The Boxing World, With 7th-Round TKO As Wilder’s Corner Throws In The Towel