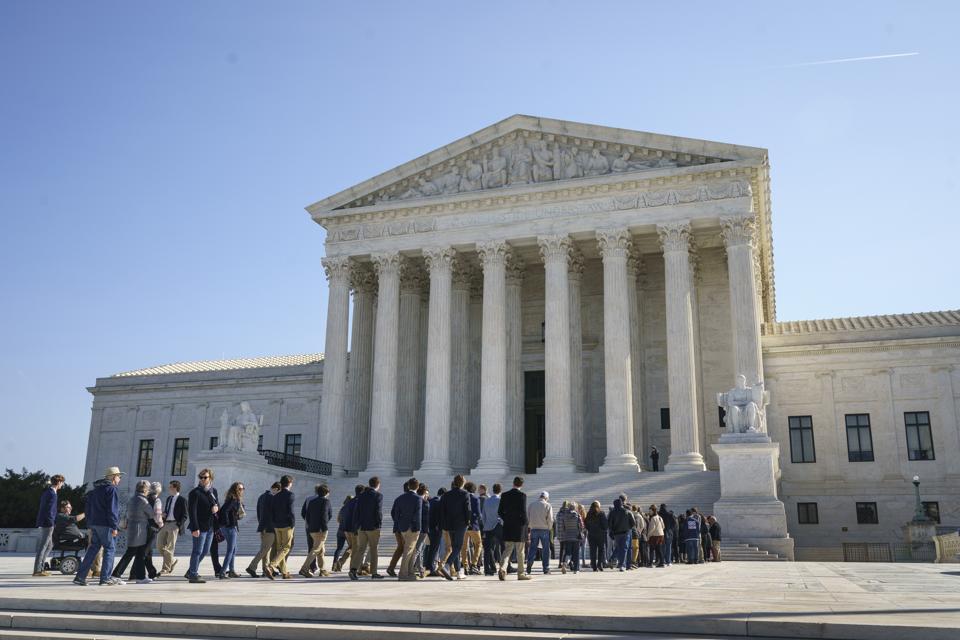 People wait in line outside the U.S. Supreme Court for a chance to hear oral arguments inside the … [+] court on March 2, 2020 in Washington, D.C. (Photo by Drew Angerer/Getty Images)

In a 5-4 decision in Kansas v. Garcia, the U.S. Supreme Court ruled a Kansas law was constitutional and could be used to prosecute immigrants for making false statements. The decision has broader implications for the prosecution of both immigrants and employers at the state and local level.

A local prosecutor in Kansas charged three individuals arrested during a traffic stop with making false statements on I-9 and K-4 forms. An I-9 form is a federal document used to verify authorization to work and a K-4 is used in Kansas for state tax withholding.

“Federal law determines the categories of immigrants who are authorized to work – and, conversely, those who are not,” said Paul Hughes, a partner at McDermott Will & Emery who represented Garcia before the Supreme Court, in an interview before the decision. “Because this is an exclusive federal prerogative, courts have long held that only the federal government can prosecute employees and employers for alleged violations of this work-authorization scheme. The question posed here is whether Kansas can circumvent that law by proceeding with effectively identical prosecutions – but framing them as turning on the state K-4 tax form.”

Hughes believed the stakes in the case were high: “If Kansas is able to do so, city and county prosecutors could engage in mass prosecutions of employees and employers that are, in substance and effect, designed to target the employment of immigrants who lack work authorization.”

A majority of Supreme Court justices decided the Kansas law was not preempted by federal immigration law. “The Kansas statutes under which respondents were convicted are not expressly preempted,” according to the majority opinion. “IRCA’s [Immigration Reform and Control Act] express preemption provision ap­plies only to employers and those who recruit or refer prospective em­ployees and is thus plainly inapplicable. The Kansas Supreme Court instead relied on §1324a(b)(5), which broadly restricts any use of an I–9, information ‘contained in’ an I–9, and any documents appended to an I–9, reasoning that respondents’ W–4’s and K–4’s used the same false Social Security numbers contained in their I–9’s.”

The majority rejected the “theory” that “no information placed on an I–9 could ever be used by any entity or person for any reason – other than the handful of federal statutes . . .” The majority noted the argument that “express preemption” prohibits the “use of the federal employment verification system ‘for law enforcement purposes other than’ enforcement of IRCA . . .” However, “This argument fails because it rests on a misunderstanding of the meaning of the federal ‘employment verification system.’ The sole function of that system is to establish that an employee is not barred from working in this country. The completion of tax-withholding documents plays no part in the process of determining whether a person is authorized to work.”

Justice Stephen Breyer dissented. “What Kansas did was prosecute Mo­rales for misrepresenting his federal work-authorization status for the purpose of obtaining employment. Kansas’ prosecution of Morales thus fell squarely within the field that, in my view, the federal Act preempts,” wrote Breyer. “By permitting these prosecutions, the majority opens a colossal loophole. Starting a new job almost always in­volves filling out tax-withholding forms alongside an I–9. So unless they want to give themselves away, people hoping to hide their federal work-authorization status from their employer will put the same false information on their tax-withholding forms as they do on their I–9. To let the states prosecute such people for the former is, in practical effect, to let the states police the latter. And policing the latter is what the Act expressly forbids.”

Before the Supreme Court heard the case, Paul Hughes was concerned about the impact of overzealous prosecutors. “If state and local prosecutors can proceed with this sort of prosecution of employees, they can likewise prosecute employers. Since many state and local prosecutors are elected officials – or individuals who eye elected office – high-profile prosecutions against employers would result.”

Other attorneys weighed in on the ramifications of the Supreme Court decision. “What is clear from the opinion is that the prohibition against working without authorization and the requirement on employers to collect documentation of employee’s lawful status does cause some employees to commit crimes like identity theft in order to evade a federal (civil) requirement against working without authorization,” William Stock, a founding member of Klasko Immigration Law Partners, LLP, told me in an interview. “The fact that a crime under state law was committed in order to satisfy a federal civil requirement shouldn’t make the state criminal law invalid.”

Stock can see how the Supreme Court decision could be used in some states. “By the same token, this decision doesn’t prevent a state from prosecuting employers who commit other kinds of fraud (tax fraud, unemployment insurance fraud and worker’s compensation fraud, for example) if the employer knowingly uses false information from the employee in those other contexts, even though the employee’s primary purpose in providing the false information was to satisfy a federal (and civil) requirement.”

Stock notes, “Employees (and by extension employers) can be prosecuted for using false IDs to comply with employment-related requirements separate from the I-9 (taxes, health insurance, etc.). The fact that those false IDs were used for an I-9 at the same time doesn’t invalidate the state law preventing use of false ID.”

“Reading the decision, I see this as a mixed bag for employers,” said Michael Neifach, office managing principal of the Washington, D.C. Region office of Jackson Lewis P.C. and a former general counsel of Immigration and Customs Enforcement (ICE), in an interview. “On the one hand, while not completely clear, the majority seems to agree that information exclusively on the I-9 cannot be the basis for a state prosecution. Because the SSN [Social Security Number] information was also available on the W4 form, and Kansas withholding, that was sufficient.”

However, Neifach sees how employers could be affected. “The reality is that states now will be able to more effectively police fraud in the employment verification context,” he said. “Employers in states disposed to prosecuting unauthorized employees will now be a force multiplier for ICE enforcement. Employers in these states should expect more requests for all employee records, including I-9s.”

In the end, the Supreme Court handed state and local prosecutors new tools to go after unauthorized immigrants and employers. How a prosecutor uses those tools will likely depend on a state’s laws – and the ambition of the prosecutor.