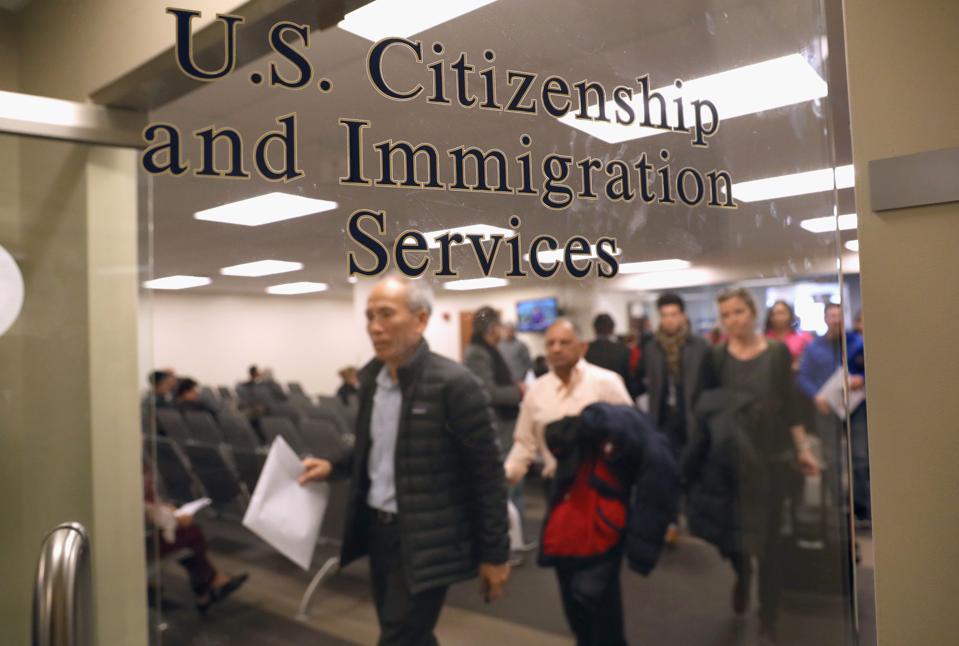 Nearly half of companies surveyed said the primary reason they send employees and work to other countries is an inability to secure a work visa or green card in the United States. A new survey finds companies view the U.S. immigration system as unfriendly to businesses.

“Forty-eight percent of employers said that placing or hiring high-skilled talent unable to secure work authorization in the U.S. is the primary driver for their outbound immigration assignments,” according to the 2020 Immigration Trends Report produced by Envoy Global in association with The Harris Poll, which surveyed human resources professionals and hiring managers across a variety of industries and company sizes. “Opening or expanding new locations” is the second-most-important reason for sending employees out of the United States.

The survey results confirm research by Britta Glennon, an assistant professor at the Wharton School of Business at the University of Pennsylvania. Glennon found immigration restrictions that prevent companies from hiring high-skilled foreign nationals in America represent bad economic policy by pushing more work out of the country and reducing innovation inside the United States.

Glennon found the countries most likely to benefit from H-1B visa restrictions and America First-style immigration policies were China, India and Canada. “The effect was somewhat geographically concentrated: foreign affiliate employment increased both in countries like India and China with large quantities of high-skilled human capital and in countries like Canada with more relaxed high-skilled immigration policies and closer geographic proximity,” writes Glennon.

The Envoy Global survey found that 74% of respondents considered Canada’s immigration policies better for business than America’s, citing Canada’s easier applications, shorter processing times, and better processes for permanent residence and transitioning from student visas to employee visas. The number of Indians who became permanent residents in Canada more than doubled from 39,340 in 2016 to 85,585 in 2019, according to a National Foundation for American Policy analysis.

“These immigration-friendly policies have provided Canadian employers with a steady supply of high-skilled talent and helped transform cities including Toronto and Ottawa into hubs for companies worldwide,” according to the survey. “Accordingly, 51% of employers surveyed said they were considering Canada for their company’s expansion, up significantly from 38% in 2019. Sixty-five percent of employers are considering Canada primarily as part of their talent acquisition strategy and 61% explicitly said that they are now either sending more people to or hiring more foreign nationals in Canada.”

Companies cited as their “biggest pain points” with the U.S. immigration application process “uncertainty of outcome,” the “rise in application denials,” and the “lack of transparency into the process.” A majority of respondents thought U.S. adjudicators were taking longer to process cases and that it was becoming more difficult to obtain favorable outcomes in individual cases.

Many policies in Canada are the opposite of those currently in place under the Trump administration. In the United States, H-1B denial rates are high and often receive lengthy Requests for Evidence, while under Canada’s Global Skills Strategy adjudicators approve many applications for high-skilled workers within two weeks with a low number of denials. Canada ensures a smooth transition for an international student to work on a temporary visa and then have a potential path to permanent residence. The Trump administration has announced plans to restrict or eliminate Optional Practical Training (OPT) and has put forward other restrictions on international students.

Companies responding to the survey were not pleased with other policies. The Trump administration ended the Deferred Action for Childhood Arrivals (DACA) program, which is the subject of a case before the U.S. Supreme Court. Eighty-two percent of employers said that ending DACA would have at least some impact on their company’s talent pool, with 41% responding, “It would impact the work authorization status of a significant portion of our high skilled employees.”

While much of the policy debate about H-1B visa holders has focused on jobs and whether U.S. workers could have filled those jobs instead, companies say there are reasons beyond a simple vacancy that motivate them to hire high-skilled foreign nationals. Between 93% and 95% of employers say sponsoring foreign-born employees is important because “foreign nationals have knowledge of markets, business practices and cultures outside of U.S.,” “foreign nationals bring valuable new perspectives to way our company does business” and “international transfers are critical to managing and expanding our global business.”

The survey confirms that H-1B visa restrictions push more jobs and innovation outside the United States. As Britta Glennon concluded in her research: “[A]ny policies that are motivated by concerns about the loss of native jobs should consider that policies aimed at reducing immigration have the unintended consequence of encouraging firms to offshore jobs abroad.”

Most of the foreign-born talent companies recruit are students at U.S. universities, particularly U.S. graduate schools. Whether that talent can remain in the United States depends on U.S. immigration policies. The latest survey results confirm what many already know – there is a global economy, and workers and companies will move to where they are allowed to thrive – and grow.

This Is Why We’ll Never Detect Hawking Radiation...