Coming home to usually sunny blue-skied Sydney for Christmas, has not all been fun and games … beaches, boardshorts and barbecues. Google up Sydney weather and you see nothing but sunshine and light cloud for the coming week, with tops of 86 degrees Fahrenheit (30 Celsius), and lows of 62 (17 Celsius). Google apparently is not equipped with a smoke-detector. For in reality, what Sydneysiders actually see is– well, very little–through a dense blanket of sooty air, occasionally lit up spectacularly by a fireball of a setting sun, barely visible behind the smog. 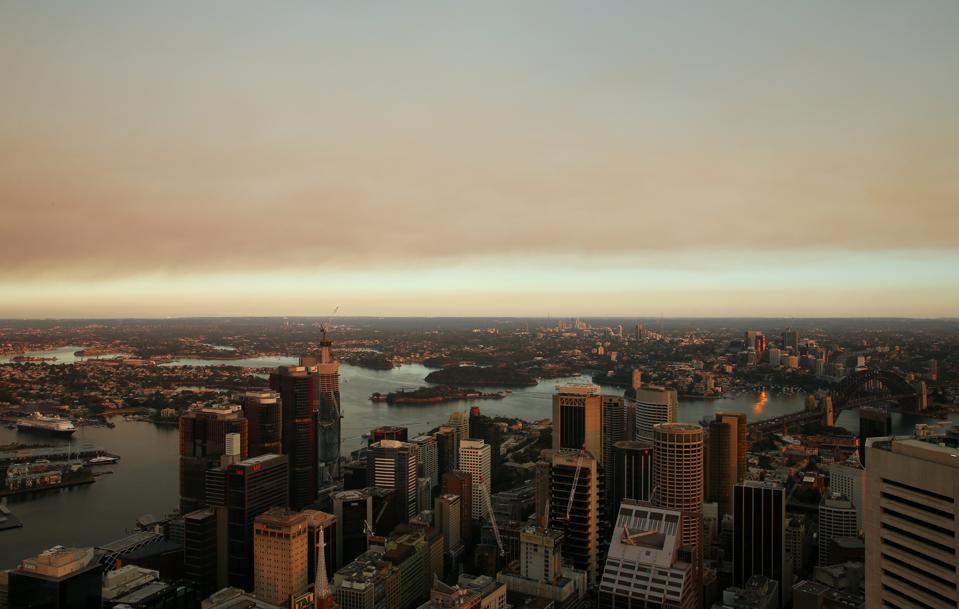 Smoke haze seen from Sydney Tower Eye Observation Deck on December 3. The haze continues to hang … [+] over the city as more than 50 bushfires continue to burn across New South Wales, prompting a public health crisis too. (Photo by Don Arnold/Getty Images)

The unprecedented smoky conditions are due to the fires surrounding the city. The blazes to the north and west have been battled for over a month–before summer even began. Some 50 of 120 fires across the state of New South Wales are still uncontained.

Early this week The Australian reported that a temperature inversion in which warm air overlays cooler air in the atmosphere, was trapping smoke in the city basin. With fires burning in all directions, the blustery winds have not cleared the haze. “Bushfire Smoke Makes Sydney Air Quality Worse Than Delhi” another of the newspaper’s headlines read.

From the time I landed down last week, the city has been submerged at times apocalyptically in a dense sheet of smoke. I am yet to see the ‘real’ Sydney. Sometimes I can’t see a few feet in front of me clearly, and that has nothing to do with eyesight.

On Tuesday things seemed to reach a climax. Going outside was not an attractive proposition, for “the smoke gets in your eyes” factor, and in everything else. Indeed, data from the New South Wales Department of Environment shows Sydney air quality this bushfire season already three times worse than for any period over the past five years. The record levels of particles and harmful pollutants in the atmosphere of the Greater Sydney region are reported at up to ten times hazardous levels. The Department’s Air Quality Index (AQI) equates the current toxicity of the air in Sydney with smoking four to 10 cigarettes a day (instead of the usual half a cigarette). And on Tuesday, as the AQI hit 669, that soared to one and a half packets.

“The spate of bushfires burning across NSW has given people in the Harbour City a taste of what it’s like to live in a smog-choked megacity,” the ABC reported. Throughout the state people have been enduring poor air quality for weeks, and doctors are seeing a sharp increase in patients with respiratory problems.

Short-term exposure to bushfire pollution can trigger itchy eyes, coughs and throat irritation (I personally can vouch for all of those). According to Dr. Christine Cowie, an environmental epidemiologist at the University of New South Wales Centre for Air Pollution, Energy and Health Research, such symptoms are well-established, and for certain vulnerable people can also lead to an increased risk of hospitalisation, respiratory diseases, heart attacks and stroke.

It’s the long term health fallout that remains hazy–and is a huge cause for concern. As Dr. Cowie told SBS: “When our bushland burns it produces a number of different pollutants but from a health perspective, the one we are concerned about, is tiny particular matter, one twentieth of a strand of hair … that are small enough to be breathed deeply down into our lungs.” And possibly be absorbed into the bloodstream, causing harm to other organs. “Current evidence indicates there is no safe lower threshold of exposure to particulate matter pollution,” she said. 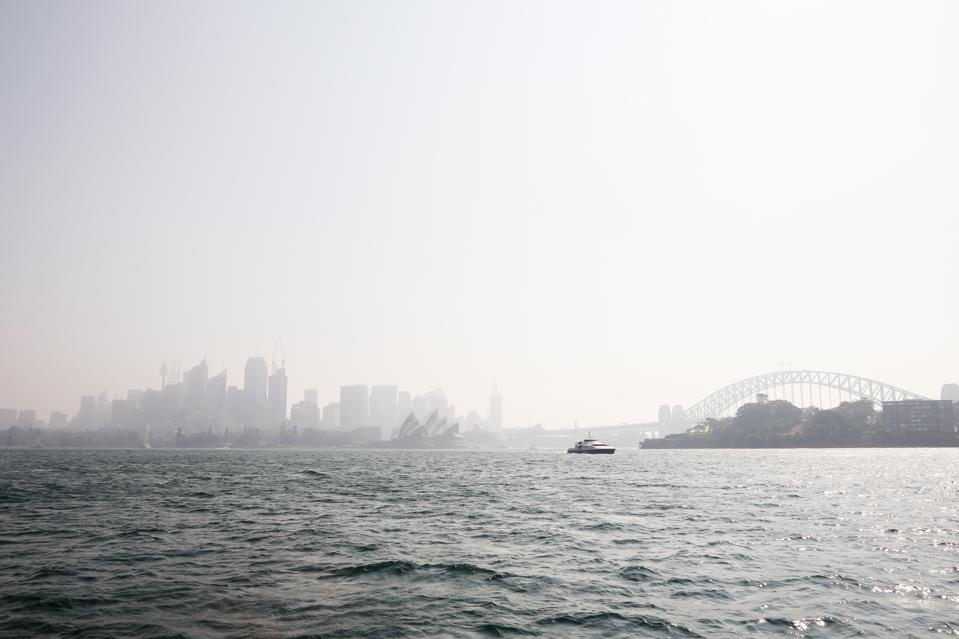 The Sydney Harbour and skyline of central business district have been shrouded in a toxic haze for … [+] two weeks with little reprieve for residents or holidaymakers. The haze is having a fallout on people’s health, with a huge surge in respiratory problems and emergency hospital visits. The smoke is caused by the bushfires which continue to blaze across the state. A phenomenon of temperature inversion has trapped the smoke in the atmosphere (Photo by Hanna Lassen/Getty Images)

Forget The Beach–You Holiday In Sydney May Be Indoors

Public health experts including Sotiris Vardoulakis, Professor of Global Health at the Australian National University, advise people to stay indoors as much as possible. “We need to minimise exposure and there are different ways of doing that–on days with high air pollution, it’s better to spend more time indoors, less time outdoors, especially to people who are sensitive,” he told ABC television. “For people who have a pre-existing illness, follow your medical plan, have access to your medication, to your inhaler, and make sure you don’t go out for a jog.”

While children, the elderly and people with heart and lung conditions are most at risk, healthy individuals should also avoid exercising–and limit time outdoors–in the current conditions. 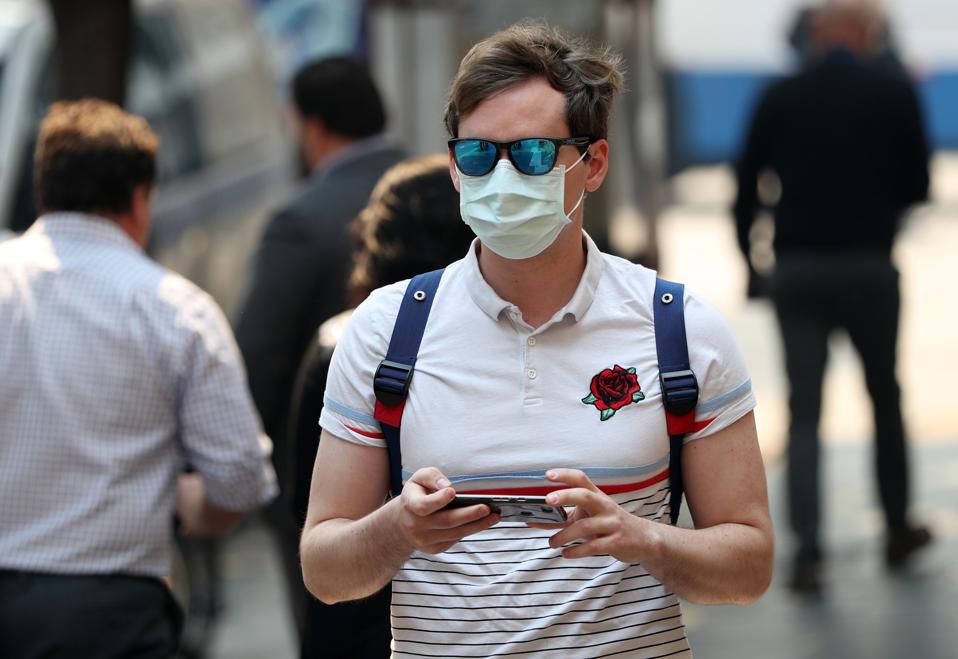 Forget cloth or paper masks. The only masks that might help you breathe easier during a Sydney … [+] holiday according to experts are the P2 masks, which can filter out some air pollution.”

What Other Precautions Can Travelers Take?

Stay inside, keep doors and windows closed, and for those lucky enough to have it, keep air conditioning on “air recycling” modes, Dr. Cowie advises. “Short term relief for those without air conditioning can be found in local shopping centres.”

Other experts suggest air purifiers with HEPA filters, at home or in hotels. As to face masks, the effectiveness of most have been ruled out. Still a mask is worth a try, if people are having difficulty breathing, Dr. Cowie says. 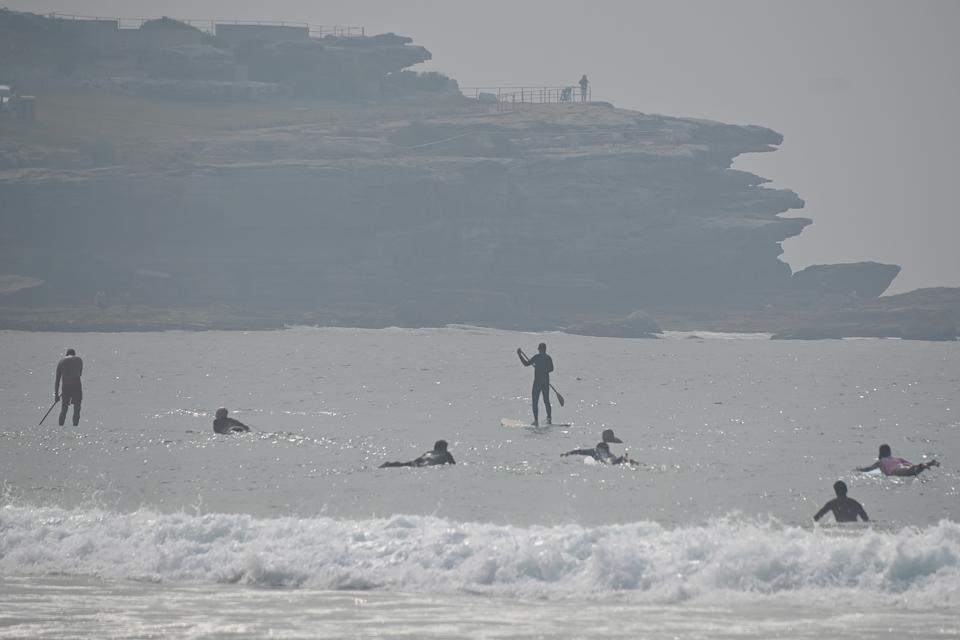 Even legendary Sydney beaches like Bondi – the big attraction for locals and visitors alike – have … [+] become a no-go zone for many, due to the very poor air quality and problems sparked by it: sore eyes, breathing difficulties, throat irritations and persistent coughs. (Photo by PETER PARKS / AFP) (Photo by PETER PARKS/AFP via Getty Images)

No End In Sight

Given the fact that summer has only just begun, and bushfire danger season began in October and ends in March, the threat of ongoing, chronic smoke haze continues. Combined with the unseasonal, cool start to summer, I am putting off my beloved trips to the beaches in the hope that there is air clarity at the end of this long tunnel.