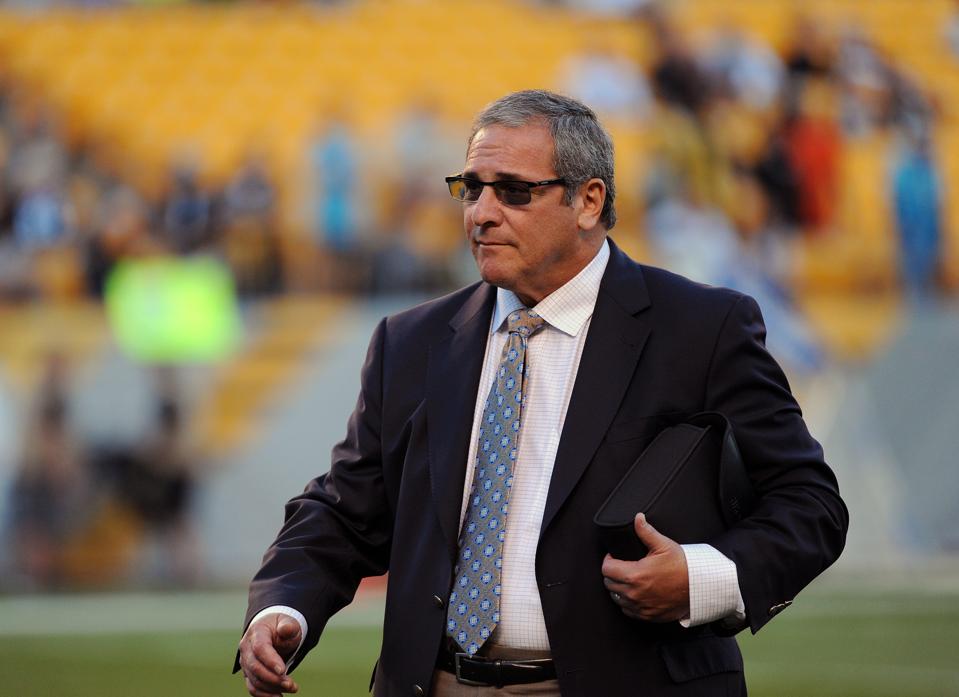 PITTSBURGH, PA – AUGUST 28: General Manager Dave Gettleman of the Carolina Panthers looks on from … [+] the field before a preseason game against the Pittsburgh Steelers at Heinz Field on August 28, 2014 in Pittsburgh, Pennsylvania. The Panthers defeated the Steelers 10-0. (Photo by George Gojkovich/Getty Images)

Despite having to work from home amid the COVID-19 pandemic, Giants general manager Dave Gettleman and assistant general manager Kevin Abrams, both of whom were on a conference call Monday with reporters, say that they’ve been able to function as close to normal as possible given the circumstances.

“We’ve tried to mimic how our meetings typically operate, both for the coaches and our scouting meetings right now,” Abrams said. “The fact that it’s all been virtual is the biggest difference. But the dialogue, the conversation, the agenda, the itineraries for the meetings go as always. I don’t think we’ve missed a beat. … It hasn’t been perfectly smooth, but it’s been smoother than anyone could have expected.

Here are some other topics Gettleman and Abrams addressed during the call.

He Feels Good About Where Things Currently Stand with Leonard Williams

One year ago, the Giants passed on using the franchise tag on safety Landon Collins because, in part, Gettleman was concerned that it might turn into a distraction.

“So let’s go to the conversation of eliminating distractions,” he said at the time. “You tag a guy. He’s mad. And that’s all you guys are going to write about. So I have to say to myself, ‘Is it worth it?'”

Gettleman likely had reason to be concerned about a distraction given that there were numerous reports at the time about Collins not wanting the tag and would have considered holding out if he had been tagged.

There was also a matter if the Giants viewed Collins as being worth the franchise tag in the Giants’ eyes, which based on their decision, he wasn’t.

So why was Williams worth it?

“What it came down to was we felt good about our cap space,” Gettleman said. “We felt for what Leonard brings to the table, and for our team, it was more prudent to put the franchise tag on him.”

Gettleman also hinted that he wasn’t worried about Williams potentially causing a distraction.

“You can’t guarantee anything in this life, but we have gotten to know Leonard well, and I feel comfortable with the decision,” he said.

Maybe the Giants, who desperately need to turn their fortunes around this year, would have taken the approach of signing free agents who had prior connections with the coaching staff or Gettleman anyway, but the challenges placed on operations by the COVID-19 pandemic which shut down team facilities and businesses was a factor in the Giants Free Agent Class of 2020.

“There is a little bit of a lean towards people you know in free agency,” Gettleman admitted. “Times have changed. I know back in the day in free agency, you had time to bring a guy in. You could spend a day with him to get to know him. Now we are speed dating, and the decision happens before you can get a guy in the building before you can get a physical, and that’s even before COVID-19.”

The Giants mostly took this same approach last year in bringing in nearly a half dozen players who had one time played for then-defensive coordinator James Bettcher in Arizona. Unfortunately, that didn’t work out as the Giants defense was historically bad, and the team ended up losing one game more than it had in 2018.

But again, the COVID-19 fact is a big one, especially when it comes to the medical aspect of things. Gettleman agreed that since all of the free agents he signed this year have fairly recent histories with someone in the organization, that was a factor.

“I do know for us a big concern was the medical piece,” Gettleman said. “We are making decisions, and you are building your roster. Just think about what happens if you sign a high-dollar guy, and he doesn’t pass his physical, now where are you?

“Now you have spent in free agency, and now the draft and you think you have your team set and you put together what you think is a good roster. Then all of a sudden, a guy doesn’t pass his physical. The guys we signed, we felt we got good value, and we are very pleased with the group.”

If for some reason, the players don’t pass their team-administered physicals, they would become free agents again, the contract they signed with the Giants becoming void, and all money against the salary cap returned.

Offensive Tackle is a Need…

Gettleman didn’t sugarcoat the poor showing last year by Nate Solder. Still, in explaining why he didn’t go for one of the premium free-agent tackles, he admitted that they’re looking at the draft where there are four solid prospects available.

And if the Giants don’t draft one of those tackles, instead opting to go with a defensive player (Isaiah Simmons perhaps?), Gettleman mentioned someone who is already on the roster as a possibility.

“We have faith in Nick Gates, the kid we signed two years ago out of Nebraska. He missed his rookie year on IR, but last year he made a lot of progress. We are excited about him,” he said.

The Giants like Jon Halapio, despite his struggles last year, but although they haven’t re-signed him yet, that’s more due to Halapio’s inability to pass a physical as he recovers from a torn Achilles.

“We won’t know about Pio until June with the Achilles,” Gettleman said, adding that the team has faith in Spencer Pulley, who was Halapio’s backup last year.

But that doesn’t mean they’ll stop there.

“We’re working that group over pretty good in the draft. We’re always going to continue to upgrade. I’m not afraid to draft over a guy,” he said. “We’re going to look at it.”

They’re also contemplating trying Gates at center, which, while not the best move given his 6-foot-5 height, is an option.

“He did do some of that last year in practice, so it’s not completely new,” Gettleman said. “Nick is smart. The thing you love about Nick is just how tough he is because it’s a fistfight in there.

Gettleman, like anyone else who watched Sunday’s re-broadcast of Super Bowl XLII, was reminded of the days when the Giants pass rush had three or four solid edge rushers who created headaches for opposing offenses.

Those days have been long gone for the Giants, who have tried—and failed—to buy a pass rush only to end up being left with dead money against their cap. They have also gambled on some young players who have yet to break out in that regard.

Despite edge rushers like Jadeveon Clowney and Markus Golden still being unsigned, don’t expect the Giants to break open the bank.

“What it comes down to is it doesn’t matter who gets the sacks; it’s about how many sacks you get,” Gettleman said.

“It is about how much pressure you apply. Some of this is going to have to come through scheme. Obviously, we haven’t gone through the draft yet. With where we’re at, would I not want two defensive ends that are 25 sacks a year guys? Who doesn’t? We are not in that position right now, so we will just keep building it.”

And About this Change in How They’re Structuring Contracts

After being at or near the top of the league two years in a row in dead money, the Giants made a change in how they structure free-agent contracts.

Instead of paying out signing bonuses, which prorate over the life of a contract up to five years, the Giants switched to roster bonuses, which only count in the year for which they are designated to be paid.

“The preference is to have flat cap counts in our contracts and to limit the amount of amortized bonuses for obvious reasons,” explained Abrams.

“When we started the free agency process, wherever possible, we were going to try to use roster bonuses with a lump sum in year one as opposed to spreading out signing bonuses over the life of the contract.

“As we had some success with getting to agreements with a few more players than maybe what we thought was realistic at the beginning, to keep cap room that we wanted to have to operate throughout the offseason and training camp, we decided to push a little bit of the roster bonus money into signing bonuses.”

According to Over the Cap, cornerback James Bradberry and linebacker Blake Martinez, each of whom signed three-year deals, were initially given roster bonuses in the first year of their contract. They have since had their contracts adjusted to include a signing bonus which opened up about $5 million in additional cap space for the Giants.

Can BTS Chart A No. 1 Hit Without Radio Play?

Can Sharks Use Magnetic Field Polarity To Orient In Space And Solve A Maze? Seems One Of Their Relatives Can!