Breaking
Looking To Improve Efficiency In Your Business? Here’s...
AI and machine learning for business
How Social Media Changed the World
Shopify: The Pros and Cons
Should your business go green?
Expanding Your Business Into Spain: What You Need...
Essentials For Your Office Coming Out Of COVID-19
What Can Marketers Learn From Digital Cults?
Why NASA’s James Webb Space Telescope Will Never...
Increasing HR Effectivity and Efficiency through Software Solutions
The Difference Between Building A Startup In Bull...
Fluor Corp Ranked Among Today’s Top Shorts
Common Pitfalls to Look Out for When Buying...
Will the Olympics go ahead this year?
Pack Up the Big Top: Insights from MozCon...
Best WordPress Themes for Blogs
Home Finance Talks Continue As Stimulus Delayed – How Long Could It Take?
Finance 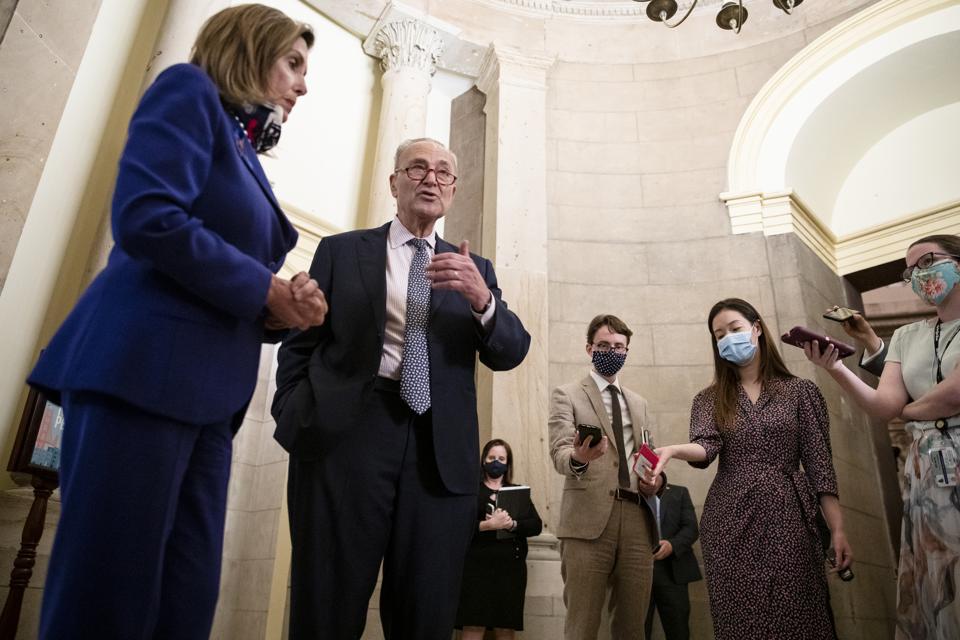 Talks continue on the next round of stimulus. How long could a deal take? (Photo by Samuel … [+] Corum/Getty Images)

Today the four key negotiators on the next round of stimulus met again in an unusual weekend session. Recent statements, from both sides, are heavier on blame than optimism for a deal. On that rhetoric, it’s easy to believe that these talks may get drawn out.

That said, there are reasons for optimism, it’s possible to see a bipartisan consensus on many issues. There are other obvious motivations for a deal too. The terrible Q2 economic numbers last Thursday have boosted the sense of urgency. If talks stall further, then stock market declines may prompt action. Just as we saw in 2008 when markets fell on delays to stimulus measures.

Polling data too with the election under 100 days away could build yet more pressure for a deal. There appears a broad framework for a deal to happen, and both sides understand the urgency. Hence extended negotiations appear unlikely.

Recent GDP data has highlighted how important more stimulus is. GDP fell 9.5% in Q2 (May-June) on the latest estimates. Note that’s the quarterly trend, which makes more sense than looking at annualized data. That’s roughly a $0.5 trillion decline. Now consider that the CARES Act pumped around $ 2 trillion into the U.S. economy over a similar period. Clearly, without the CARES Act and similar measures. which amounted to 14% of GDP, the economic situation could have been much more dire.

That’s why the next round of stimulus negotiations matter to both the economy and markets. We are likely seeing some rebound to the U.S. economy as certain lock down measures ease. In fact, a material  bounce for Q3 2020 is broadly expected by economists. Still the U.S. economy needs some help. That creates urgency for more stimulus. Both sides see it. That’s why there’s more effort spent on blame in for most involved in negotiations, rather than arguing stimulus is unnecessary.

In 2008, both parties were, once again trying to reach a stimulus deal for the U.S. economy during a recession. The deal failed to pass in late September 2008 and the markets plunged before a deal ultimately went through. Should delays extend beyond next week, then the stock market may make its opinion known with a similar drop. That would serve to focus the minds of lawmakers.

Aside from the various structural elements pushing for a deal including the fate of the economy, the stock market and a pending election. There also appears to be a broad platform for a deal between both sides. Though statements have not been positive, the two sides’ proposals may not be quite as far apart as they seem. There are three key pieces.

It does appear that a consensus is emerging on the core tenets of a deal. Both sides appear happy with another round of $1,200 stimulus checks, sometimes called recovery rebates or economic impact payments. Mitch McConnell has advocated for lower income limits for checks at around $40,000 of income. In part this is because many Republicans wish to reign in spending, in order to restrain growth in government debt. The CARES Act alone boosted government debt by around 8% to 10%. On the Democrat side, Kamala Harris and others, have pushed for bigger checks. However, despite these additional positions, it appears many lawmakers and the White House are broadly comfortable with a second round of checks following the terms of the first round. The details could change, but more checks have gone from being debated to becoming a core element both sides can agree on.

Again, both sides appear comfortable with continuing to pay additional unemployment insurance. There is not yet agreement on how much. The HEALS Act proposed an additional $200 payment, Democrats would prefer to continue the $600 payment per the HEROES Act that passed the House in May but got no further. A consensus may be found between the $200 and $600 payment. Mitt Romney and others, yesterday proposed a tapering unemployment payment over the next several months, which could frame a deal. The details here matter a great deal as the $600 payment has done much to support the U.S. consumer in recent months. Even a cut to $200 payments could materially hurt growth for the remainder of 2020.

The PPP offered loans to smaller businesses to help them weather the economic store and offered incentives for retaining employees. There’s again a bipartisan desire to do more here and ensure the programs is doing more to help smaller businesses.

With broad consensus on key areas amounting to about half of the original CARES Act. What’s the delay? There are several reasons.

First off, details matter. Specifics on unemployment insurance particularly are taking some time to hammer out and these details will impact the course of the U.S. economy over the coming months.

Secondly, Mitch McConnell has been relatively late in addressing this next round of stimulus. The Democrat-controlled House passed the HEROES Act in May, though it didn’t get traction in the Senate from McConnell. McConnell unveiled the HEALS Act proposal just last week. Next week $600 unemployment insurance payments end. That very tight timeline from McConnell, perhaps an attempt to create negotiating leverage from the ticking clock. Still the shortage of time here, has made it hard to build consensus.

Thirdly, though stimulus checks, further PPP measures and some form of continued elevated unemployment insurance payment have support, there are plenty of other priorities for both sides. How should evictions be dealt with over the coming months? What legal protections should be offered to businesses? What healthcare spending is needed to better combat the pandemic? How should student loans be treated? Both Democrats and Republicans have priorities here that they’d like to see in the next round of stimulus. Again, reaching consensus takes time.

It is alarming that $600 unemployment insurance payments expired Friday, when it appears a majority of both parties would have preferred to maintain an additional payment albeit in different ways. With the introduction of the HEALS Act just earlier this week, the timeline has always been extremely tight to pass a measure within days. The bones of a deal do appear to be there including further stimulus checks, more PPP lending and some continuation of unemployment insurance. That said, thrashing out the details could take several more days. Should talks take longer than that, it seems likely that a negative stock market reaction or polling data under 100 days from an election, will bring renewed focus to the deal.