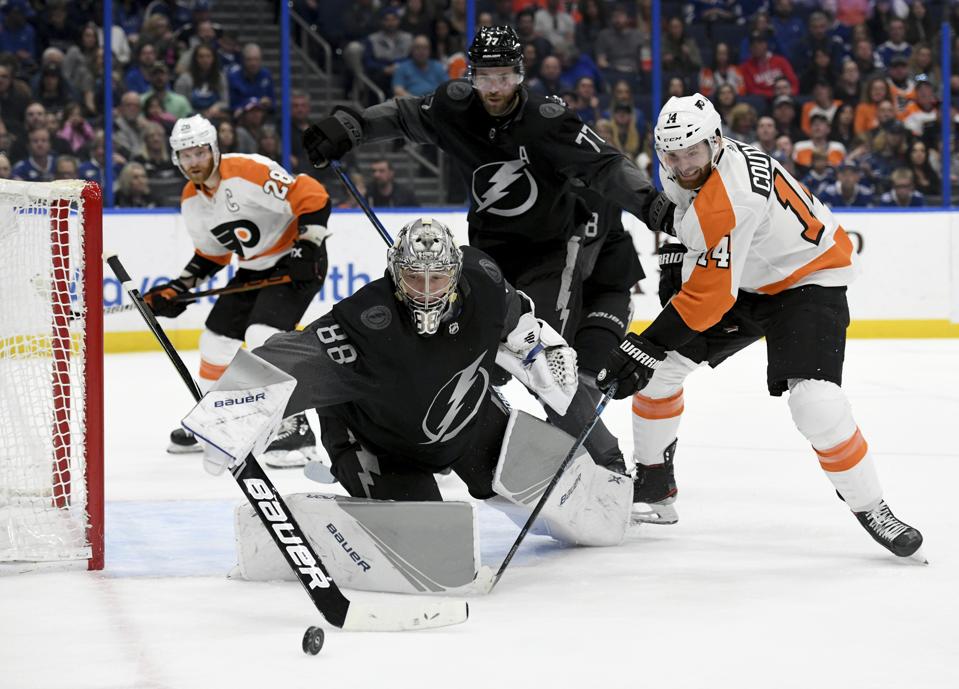 Andrei Vasilevskiy and the Tampa Bay Lightning have enjoyed a lengthy win streak by largely shutting … [+] the door on the opposition. (AP Photo/Jason Behnken)

Through the same number of games this season the team has scored at least five goals 15 times. Yet, Jon Cooper’s team has proven, and rather resoundingly so, that it can get the job done without having to blow opponents out of the arena.

That’s just fine following a 2018-19 season in which the Lightning led the NHL in scoring with just under four goals per game while equaling the league mark with 62 wins only to be followed by a first-round postseason sweep at the hands of the Columbus Blue Jackets.

Nobody is complaining that this season has a different look and feel. Not when it has resulted in the Lightning, which acquired 21-goal scorer Blake Coleman from New Jersey on Sunday night, becoming the third team in NHL history (1929-30 and 1970-71 Boston Bruins) to have two double-digit win streaks in the same season. Both have been of the 10-game variety to equal the team record set last season.

And certainly nobody is complaining while Tampa Bay ascends the standings to being right near the top once again after winning only 17 of its first 34 games.

To underscore how effective the team has been without having to light up the scoreboard, in the first nine games of the Lightning’s current 10-game win streak they did not once score as many as five goals. In the 10th game, Saturday night’s 5-3 win against the visiting Philadelphia Flyers, the fifth goal was an empty-netter by Nikita Kucherov with 22 seconds remaining.

During an eye-opening 22-2-1 run dating to December 21, Tampa Bay has scored as many as five goals all of six times and in two such instances the fifth goal was scored into an empty net.

“Sometimes when things aren’t going our way offensively, the focus is on defending hard, making sure we’re not getting scored on and playing the right way,” said forward Pat Maroon, who signed as a free agent after winning a Stanley Cup with St. Louis last season. “I think we have done a really good job of focusing on winning 2-1 and 3-1 hockey games and finding ways not to turn pucks over. We have done a good job of making smart plays in our zone and at the other blue line (when the offensive opportunity is not there.)”

When things have not gone so well, such as earlier in the season when turnovers were noticeably more frequent, goaltender Andrei Vasilevskiy has come up with one huge save after another. The 25-year-old is on a team record points streak of 21 games (19-0-2) and heads into Monday night’s contest at Colorado, when the Lightning can set a team record with an 11th consecutive victory, leading the league in wins with 32.

“We believe we have the best goalie in the world and he has proven it during this stretch,” said captain Steven Stamkos, who returned to the lineup Saturday after missing three games with a lower-body injury. “It is not just his play on the ice, but it is his preparation and work ethic. We’re glad he is on our side.”

Heading into the matchup against the Flyers, Vasilevskiy allowed less than three goals in 12 of his previous 16 games. Being in a such a groove is not only a credit to his work, but also how the team in front of him has performed. In fact, the Lightning have gone the entire calendar year (21 games) without allowing more than three goals. The last time Tampa Bay yielded more than three goals was in a 6-4 New Year’s Eve win at Buffalo.

“That just goes to show the commitment level that we have on this team, especially since the beginning of the year,” said Stamkos. “The start (to the season) we had wasn’t bad, it just wasn’t up to our expectations and I think we have it figured out now.”

Things have been so tidy of late that after the Lightning scrambled around in the third period against the Flyers and gave up a few odd-man breaks, including a 2-on-0, Cooper had some rare criticism.

“We have been on a pretty good run and I have stood up here a lot and it is not too often where I can criticize this team because they are giving everything they have,” he said. “You can’t be on top of your game all the time and (Saturday) was a night where we found a way to win. It just wasn’t the right way to win.”

Come April, all Lightning fans will want to see are wins regardless of how they come about. Yet, it is hard not to be impressed by this team’s considerable run as it enters the week with 83 points, good for second in the NHL and three behind division rival Boston.

Still, it’s one game at a time for the Lightning.

“Everyone’s having fun around the room, but at the end of the day it’s still just a part of the season,” said Anthony Cirelli, who this season has made a great case for winning the Selke Award as the league’s top defensive forward. “We have to keep working hard, try to be better, and play a full 60-minute game.”

Lucy Campbell Riding The Crest Of A Wave...