Breaking
How to Run Nonprofit Marketing Ads
Entrepreneurs Are Bringing Transparency To Home Buying And...
Best Incentive To Get Vaccinated: Money, Messaging, Or...
Page Level Query Analysis at Scale with Google...
How A CIO Can Align IT With Business...
Blogger of the Month: Jo, Girl Eats World
6 Things Women In Business Know That Men...
How to Use First-Party Data for Ad Personalization
Pressing Reset—Putting A Fallen Unicorn Back On Its...
How We Went Viral: Promoting Content with Influencers,...
Blame Olympic Record Price Tag For Return To...
Apple iOS 14.5 Release: Should You Upgrade?
How to Come up with Podcast Topics and...
Why Gaming Gear Company Razer Launched A $50...
Technical SEO Implementations to Increase the Impact of...
30 Brilliant Ways to Market Your Eco-Friendly Shopify...
Home Business Tampa Bay Rays’ Pitching Depth Vital In Short 2020 Season
Business 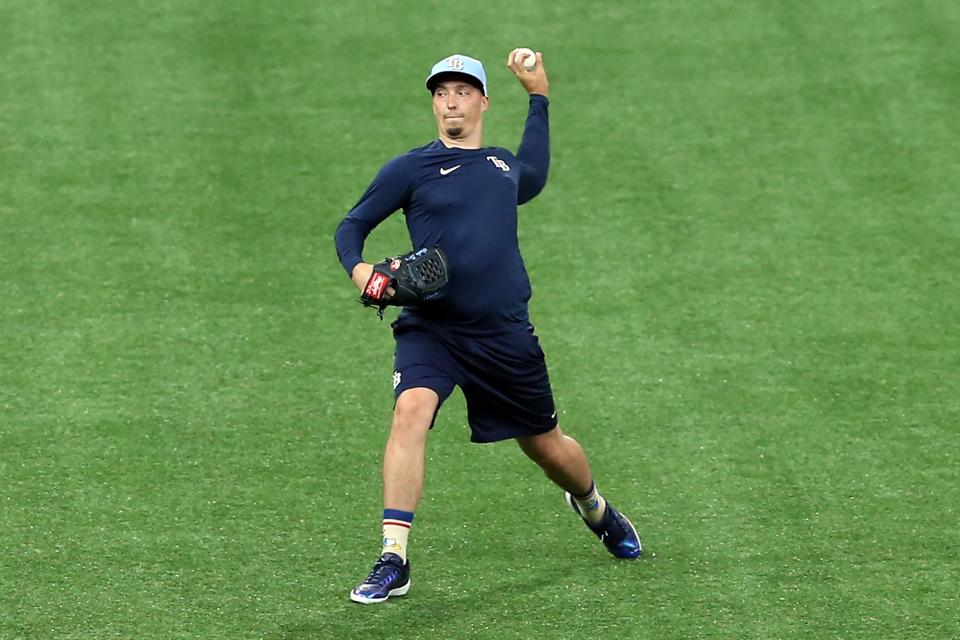 After winning the American League Cy Young Award in 2018, the Tampa Bay Rays’ Blake Snell was slowed … [+] by injuries last season. He is healthy and ready to go in what will be a short 2020 season. (Photo by Cliff Welch/Icon Sportswire via Getty Images)

There were 135 days between the Tampa Bay Rays’ Game 5 ALDS defeat at Houston last October and their first spring training game in late February, which was against Boston in Fort Myers.

There will be 134 days between the aforementioned Grapefruit League opener against the Red Sox and their July 24 season opener at Tropicana Field against Toronto.

It is like having two offseasons with a little spring training sandwiched between. The difference is preparing for what would have been a jog through a 162-game slate and a 60-game sprint. Indeed, this abbreviated 2020 campaign offers a razor-thin margin for error.

Because the curtain rises on the season and the pennant race at essentially the same time, organizational depth will be critical, especially on the mound during a short summer. After all, injuries along with the potential of losing players testing positive for Covid-19 could strain a staff in a hurry and with less time to recover.

Manager Kevin Cash did an exceptional job juggling 31 pitchers last season — many on the frequent (Triple A) Durham-t0-St. Pete shuttle — that combined to post a 3.65 ERA, good for second to the Dodgers in MLB. As was the case when the team popularized the role of the opener and bulk-inning reliever in 2018, last year’s staff boasted multiple pitchers that filled a variety of roles.

Such depth and versatility helped mitigate the challenges of losing reigning Cy Young winner Blake Snell to a pair of stints on the injured list and losing the services of Tyler Glasnow for nearly five months after the 6-foot-8 righthander roared out of the gate as one of MLB’s top moundsman. Yonny Chirinos, who had a strong first half, missed six weeks in the second half with an injured finger on his right pitching hand.

The bullpen suffered its fair share of dents and dings, including the loss of Jose Alvarado for the equivalent of two-plus months due to personal reasons and injuries. Shoulder inflammation cost Diego Castillo about three weeks.

The fact the Rays won 96 games despite such key and prolonged injuries underscored the outstanding work of Cash, his staff and the scouting and player development departments.

All that fine work should continue to pay off during this summer’s two-month dash to the finish line. The aforementioned pitchers are healthy and combined with the depth that has been built, Tampa Bay should once again be one of the top teams. A strong starting rotation figures to be key, but there will also be plenty of support available during this stretch drive of a season.

Snell, who shook off elbow soreness in the spring, Glasnow and Charlie Morton, who won 16 games a year ago and finished third in American League Cy Young voting, comprise a formidable trio at the top of the rotation. Ryan Yarbrough and Chirinos could make it a very appealing starting quintet.

Trevor Richards, acquired from Miami at last season’s trade deadline, and two-way Brendan McKay are also options as starters. A healthy Anthony Banda (Tommy John surgery in 2018) could prove to be a nice luxury as well.

Alvarado’s well-being — the lefty is pleased with how things have progressed personally and professionally — and a healthy Castillo help make a strong ‘pen stronger and present Cash and pitching coach Kyle Snyder all the more flexibility that is sure to be vital effective opening night against the Blue Jays.

Nick Anderson, acquired from the Marlins along with Richards at the trade deadline, was downright dominant (0.66 WHIP) after arriving in St. Pete and could be the new closer.

During a short season, Cash will need to summon his most effective relievers on consecutive days, and perhaps frequently and for more than one inning. It remains to be seen, but wear-and-tear concerns may not come into play the way they would over the course of 162 games.

“That is a priority for Kyle as far as the bullpen,” the sixth-year Rays manager said Sunday about getting the relievers to go on back-to-back days. “The relievers that have been here before (summer camp) got going, Diego, Alvarado, Nick Anderson, they want to touch the mound every day. We have to tell them to temper that. No science behind this, but you just wonder are they that much fresher. We shaved off three months of a workload, taxing travel, up-downs in the bullpen and with everything being done in a controlled environment and setting. Is that going to be a benefit to all pitchers throughout the game once we get it going?”

The answer will begin to reveal itself in less than three weeks. However Cash, Snyder and bullpen coach Stan Boroski decide to handle their collection of arms, the staff’s depth and versatility is sure to be at or near the top statistically once again.

How to Bring Your Best Self to the Online Conference Season