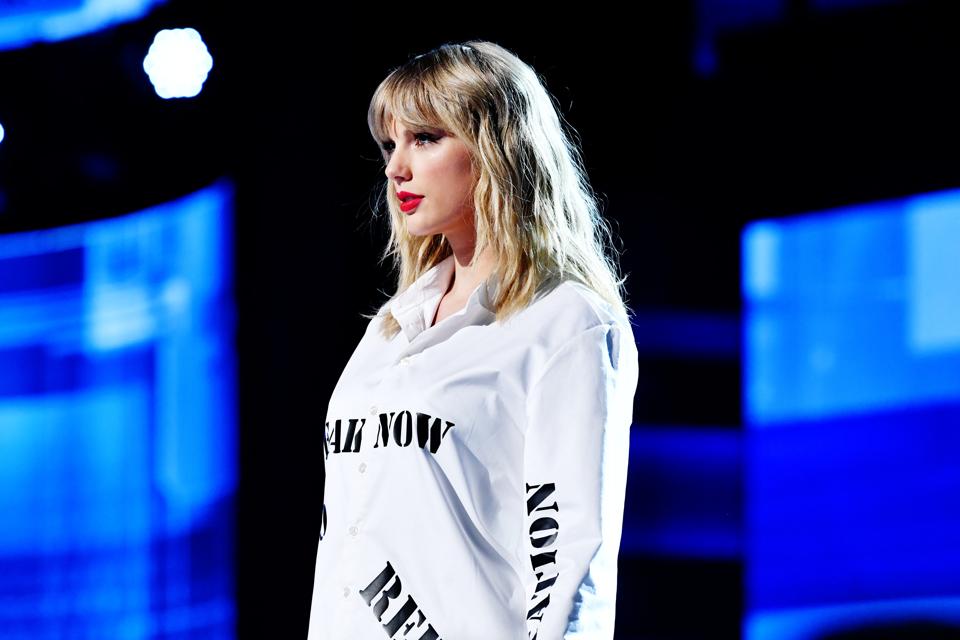 Taylor Swift ended the decade much as she began it: as arguably the biggest pop star alive, capable of selling millions of albums and commanding stadium-sized crowds. Her latest album, Lover, became the top-selling album of 2019 in its debut week, selling 679,000 copies (and an additional 188,000 album-equivalent units, bringing the first-week total to 867,000 units). These are clearly massive figures, but the disparity between sales and streaming highlights a less rosy possibility: Swift’s days as a dominant singles artist may be over.

So far, Lover marks the first Swift album since 2010’s Speak Now to not spawn a No. 1 hit on the Billboard Hot 100. The album’s first two singles, “ME!” and “You Need to Calm Down,” both reached No. 2, buoyed by eye-popping videos and the hype that always accompanies Swift’s returns to the spotlight after some time away from music. Both songs were barred from the top spot by Lil Nas X’s inescapable “Old Town Road,” whose stratospheric success nobody could have anticipated.

So, no, Swift’s Lover singles were by no means failures. But when your bar for success is reaching No. 1 with ease, it’s hard not to view their performances as slightly disappointing. Even more dispiriting is the fact that the album’s title track—and one of its best songs, in this writer’s opinion—has only peaked at No. 10 on the Hot 100.

In an alternate timeline, perhaps it could have occupied the top spot. But typically, underperforming singles beget more underperforming singles, especially when your album’s lead single is as polarizing as “ME!” Swift has been known for releasing red herring lead singles dating at least back to 2012’s Red—whose lead single, “We Are Never Ever Getting Back Together,” became her first chart-topper—yet each one managed to hit No. 1 thanks to their sheer catchiness or viral appeal. Rule out all the other limiting factors, and the fact is that Swift simply picked a bad song to lead off her Lover promotional campaign, and the subsequent singles followed.

Of course, a few lukewarmly received singles (which, again, still peaked at No. 2, an impressive feat for just about any artist) aren’t enough to spell doom for Swift’s future as a singles artist. But Swift historically does not perform exceedingly well on streaming services either. She’s very much an old-school pop star who rose to fame at a time when CD sales and terrestrial radio were still an artist’s bread and butter. Now that streaming makes up 80% of music industry revenue, Swift will have to adapt accordingly or risk falling behind other leading pop stars.

Swift’s relative underperformance on streaming services comes into greater clarity when comparing her recent singles to other No. 1 hits of 2019. Nearly eight months after its release, “ME!” has generated just over 333 million Spotify streams; “You Need to Calm Down” has earned roughly 283 million, while “Lover” approaches 180 million (with an extra 32 million from the Shawn Mendes remix). The aforementioned “Old Town Road,” which ruled the roost for 19 weeks, has a combined 1.3 billion Spotify plays from its original version and Billy Ray Cyrus remix. Post Malone’s “Sunflower” and Billie Eilish’s “Bad Guy” have broken 1 billion streams; Ariana Grande’s “Thank U, Next” and “7 Rings” have both exceeded 950 million; and Malone’s “Circles,” which has only been out for a little over three months, has generated 435 million Spotify streams.

Streaming plays an increasingly huge role in a song’s success and longevity on the Hot 100. Tracks that get off to a slow start may experience a commercial resuscitation after going viral, such as when “Old Town Road” gained traction after inspiring the “Yeehaw Challenge” on TikTok. Streaming success is the reason why Post Malone’s debut album Stoney can linger inside the Top 40 more than three years after its release, or why Drake’s Scorpion can earn a 5x platinum RIAA certification despite its relatively light album sales.

Let it be said that Swift is still the queen of album sales (along with Adele). She’s the only artist in Nielsen SoundScan history to have four albums sell more than 1 million copies in a week, and with Lover, she became the first female artist to have six albums sell more than 500,000 copies in one week. But Swift also benefits greatly from pre-release hype and deluxe editions of her albums. As a result, her album and single sales have become increasingly front-loaded. “ME!” gradually fell down the Hot 100 following its debut, while “You Need to Calm Down” dropped from No. 2 to No. 13 in its second week. Without an increased streaming presence, Swift will have a hard time reigning atop the Hot 100 for weeks at a time—or reaching it at all, if she encounters another song as massive as “Old Town Road” in the future.

It’s also worth noting that Swift’s mild decline as a singles artist is hardly a death knell for her career. She’s still a commercial juggernaut, and her albums will likely keep outselling her contemporaries in their first week. Her 2008 album Fearless did not spawn a No. 1 hit, yet it remains her bestselling album, earning a diamond certification from the RIAA. And of course, she still dominates the concert industry, selling out stadiums and hosting her inaugural Lover Fest next year. Swift is still at the top of the pop music heap, even if the slightest cracks in her armor are beginning to show.