Breaking
Everything You Need to Know About Corporate Social...
Is Adaptive Leadership the Key to Motivating Employees?
Why business events are set to return with...
Business events set to return with a bang!
Expanding Internationally: 5 Things to Consider for eCommerce...
How the Machine Shop Is Going Digital in...
Sustainable Food Packaging Is Helping the Hospitality Sector...
Top 5 Investment Practices To Make More Money...
Managing IT Requirements for SMEs: 5 Aspects that...
How To Build a Successful Luxury Brand In...
Finding The Best Google AdWords Consultant for Your...
8 Top Tips To Help Your Agricultural Business...
Three Reasons Why Office Décor and Design Are...
Looking To Improve Efficiency In Your Business? Here’s...
AI and machine learning for business
How Social Media Changed the World
Home Business Terrence Malick’s ‘A Hidden Life’: A Challenging And Philosophical Film
Business

Terrence Malick’s ‘A Hidden Life’: A Challenging And Philosophical Film

A film made by one of cinema’s greatest auteurs has just been released, which sadly has not been celebrated in this year’s award circuit. A Hidden Life is a challenging and philosophical three-hour long film.

Terrence Malick’s latest film, A Hidden Life, is a film based on true events. In his usual lyrical style, Malick relates a moving tale of an Austrian farmer, living in the middle of the mountains, with his beloved wife Fani (Valerie Pachner) and their three daughters, who refuses to go to war and sign an oath of loyalty to Adolf Hitler. No matter how much the villagers try to persuade Franz Jägerstätter (played by August Diehl) to join in the war effort, he refuses to take part in what he views as wrong and evil. He is arrested for being a conscientious objector, imprisoned, then put on trial.

The film begins by establishing the idyllic life the young couple is living in St Radegund, a village amongst the Austrian mountains. The voice-overs of the couple recount the way they met, the dress she wore, the motorcycle he was riding, and how they now play in the fields with their three young daughters. Malick is one director whose films are most recognizable with his distinctive style of the cinematic language. One image leads to another in a flow paced by the rhythm of the voice-overs and the silence of farm labor. He is here his most lyrical in establishing the peaceful life Franz leads, and which the war disturbs.

Similar to The Tree of Life, which captured so vividly the interminable days of childhood, the beginning of A Hidden Life depicts the happiness of two people meeting and forming a family together. This feeling of fulfillment is broken once the war begins—a war, Franz insists, which has nothing to do with their lives and the village. His objection is not only to war in itself, but much more to the Nazi ideology, which counters his deep religious faith and sense of ethical morality. 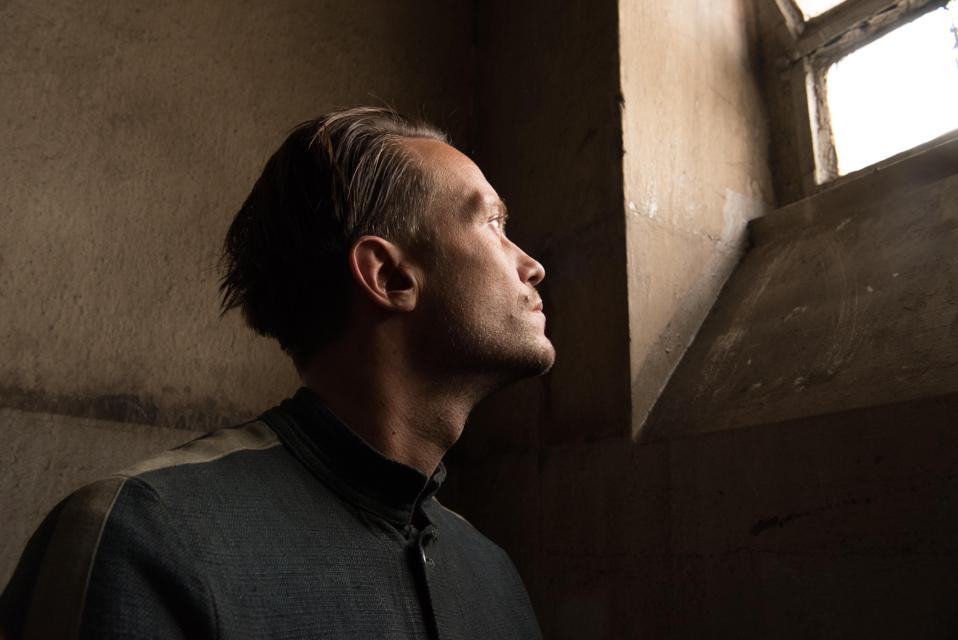 This is where the film shifts from idyllic contemplation, or remembering, to an exploration of the significance of moral decisions. The film explores what it means to stand by one’s own morality and be faithful to one’s own faith. Even when everyone around him, including the Church itself, try to persuade him to give in—his family are treated as outcasts in the village, mud is thrown at his daughters, and he is finally imprisoned—Franz does not alter, and stands firm by his ethical beliefs, seemingly undeterred by the consequences.

The title refers to a quote from George Eliot: “The growing good of the world is partly dependent on unhistoric acts; and that things are not so ill with you and me as they might have been, is half owing to the number who lived faithfully a hidden life, and rest in unvisited tombs.” Can the seemingly unimportant action of a single person be of historical importance? This is a question which returns again and again in Malick’s film. Franz is continually asked if he thinks his action really matters, if anybody will ever remember what he did, and since they conclude no one will, how unimportant his stand is.

Franz’s decision will not change the course of history, and yet he can do nothing other than stand by it, for to give in would be to betray himself, his own sense of self, the film suggests. The questions that the film raises seem evermore relevant today. Within the framework of the narrative, Malick’s film is a reflection, a sort of meditation detailing Franz’s thought-process, on faith and free will.

Franz Jägerstätter was declared a martyr by Pope Benedict XVI in June 2007, and was later beatified.

A Hidden Life is an Elizabeth Bay Productions presentation of a Studio Babelsberg and Medienboard Berlin-Brandenburg production. It is distributed by Fox Searchlight Pictures. It had a limited theatrical release in the U.S. on December 13, and is in U.K. cinemas from January 17, 2020.