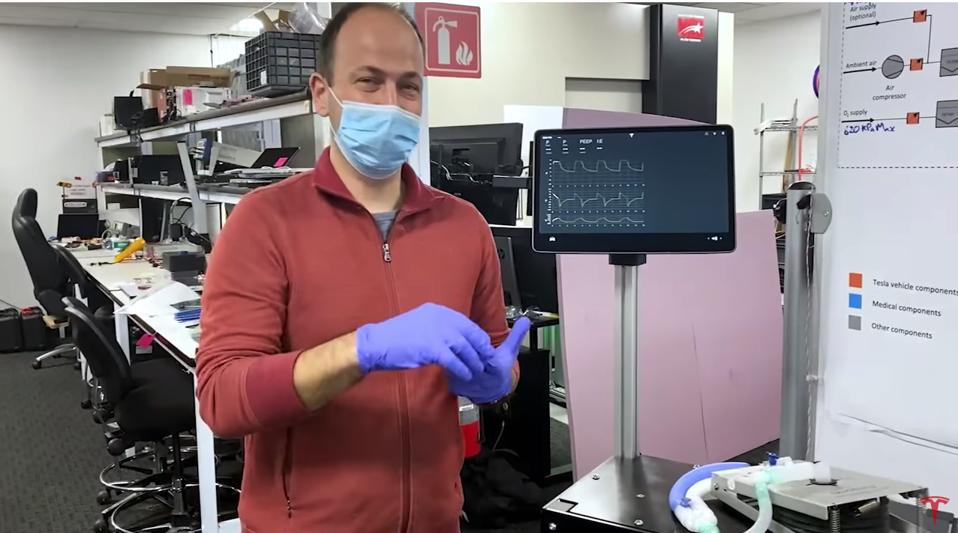 The coronavirus crisis has led Elon Musk to jump into the medical device industry, with SpaceX fabricating components for Medtronic MDT ventilators, corporate donations of BiPAP breathing machines that can be modified for use as non-invasive ventilators and promising to use a Tesla TSLA factory to produce ventilators. Now Tesla engineers have designed a prototype ventilator that uses parts adapted from electric vehicles.

The carmaker posted a video Sunday featuring a group of engineers, all wearing surgical masks and gloves, showing off their creation built with inhouse automotive parts, rather than with the compressors, pumps and other highly specialized components desperately needed by medical device manufacturers to ramp up ventilator production.

“We want to use parts that we know really well, that we know the reliability of, and we can go really fast and they are available in volume,” said Joseph Mardall, Tesla’s engineering directory.  “We’ve used a lot of those.”

The device shown in the video includes a touchscreen display panel, the same used in Model 3 electric sedans, that track intake of oxygen and output of carbon dioxide, a Model 3 infotainment computer system, lithium-ion battery, as well as pumps, compressors, tubes and an oxygen mixing chamber. Given that it’s just a prototype, it’s not clear when or if Tesla will be able to produce the devices in high volume–assuming they are tested and approved for use for COVID-19 patients by the U.S. Food and Drug Administration.

The video appeared a day after device maker Medtronic–which is in talks with Tesla on how the companies could work together to boost supplies of the devices that keep COVID-19 patients breathing when the disease robs them of the ability to do so on their own–said in a tweet that Musk’s rocket company SpaceX is making a “vital component for critical care #ventilators — more vents sooner for #COVID19 patients.”

Musk said via Twitter on April 3 that SpaceX is making “proportional solenoid valves for Medtronic.”

Musk’s moves come as General Motors GM and Ford also team up with medical device makers to help them accelerate production, though neither of those automakers has touted their own designs. Instead GM and Ford, like SpaceX, plan to make components at auto parts plants, which companies including Medtronic, Ventec, GE Healthcare and ResMed RMD say is most critical.

“It’s not a final ventilating manufacturing problem. It’s a parts problem,” ventilator maker Mick Farrell said in an April 1 interview on CNBC. “When we get genuine offers from automotive companies, aerospace companies and defense companies, and we’ve had hundreds of offers, we say fantastic! Don’t make a ventilator and buy these parts. Make these 10 parts for us and let us scale, which we can, between us and our competitors, to meet the demands of COVID-19.”

The FDA accelerated the approval process for coronavirus-related treatments on March 31 to help with the health crisis. Nevertheless, ventilators made for patients with the most severe breathing problems are extremely complex and certification will take time, according to Gail Baura, an engineering professor at Chicago’s Loyola University who specializes in medical device technology and is author of a textbook on the subject that’s widely used at medical schools.

“There are all these engineering standards that are used to design these medical devices, and the FDA looks to make sure that you have tested and proved conformity to these standards before you can get FDA clearance and legally sell these devices,” she tells Forbes. A lot of time will be required to validate ventilators coming from these new manufacturing partnerships, “even with the emergency use authorization that the FDA is providing.”

New Coach, New And Recurring Problems: What Is...

Suleimani And Trump: What Happened, Why Now, And...

Is Your Company Using Artificial Intelligence To Transform...

Remember These 5 Avoidable Mistakes To Increase Your...