Home Technology Tesla Vs Everyone Else: Why Electric Cars From Traditional Carmakers Will Continue To Struggle Against The Model 3, Model Y In The U.S.
Technology

Tesla Vs Everyone Else: Why Electric Cars From Traditional Carmakers Will Continue To Struggle Against The Model 3, Model Y In The U.S.

I’m in the EV slow lane.

That’s the feeling I get every time I visit a charging station.

The best illustration I can give is Santa Clarita — a city just north of Los Angeles. That’s the location I have been using the most.

The first photo* below is an EVgo fast charging station in Santa Clarita. Two chargers (my Chevy Bolt is on the right).

The photo below that is a Tesla Supercharger station — in the same shopping center. Two dozen chargers.

Which charging network would you choose? I thought so. 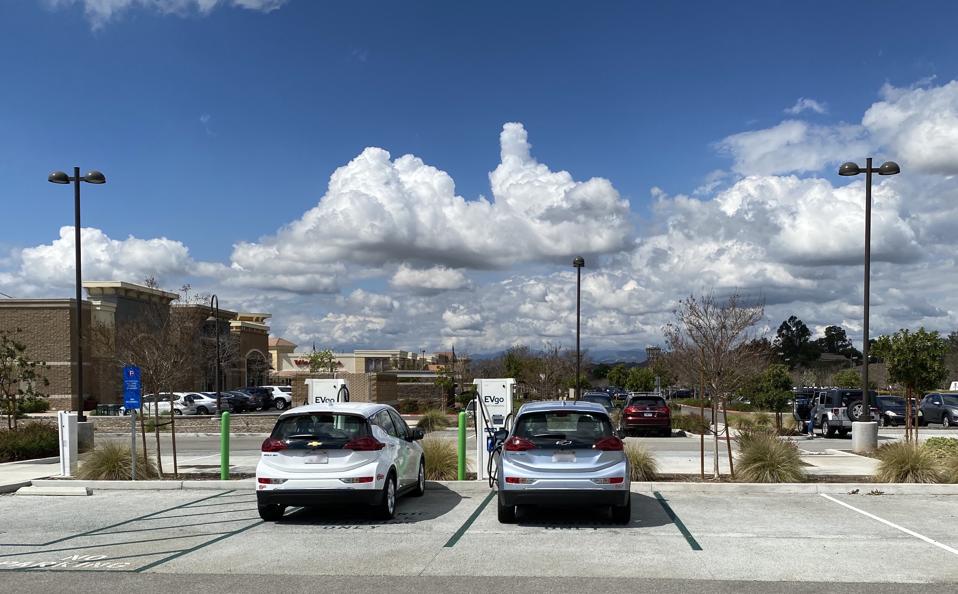 An EVgo DC fast charger station in Santa Clarita, Calif. My Chevy Bolt is on the right. 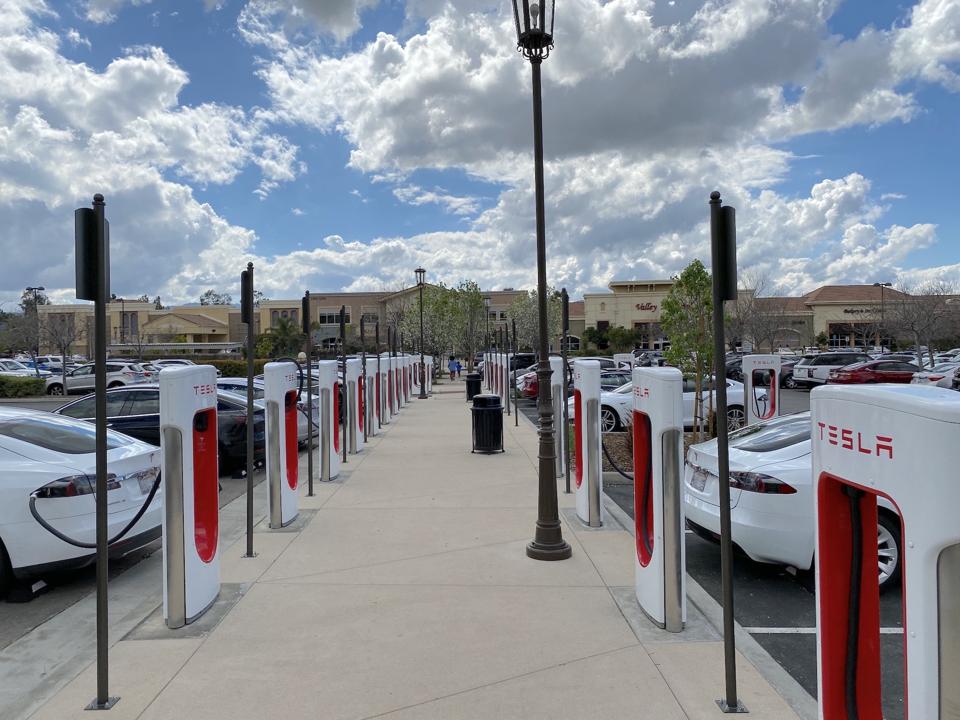 A Tesla Supercharger location in the same shopping center as the EVgo charging location (about 100 … [+] yards away).

As I’ve mentioned before in previous posts, I’m surrounded by Model 3 owners in the community where I live. I would say, as of March 2020, it’s the most popular new car.

But the reason isn’t just the car. It’s also the knowledge that you’re buying into a robust Supercharger network owned and backed by Tesla.

GM will sell you a very good EV (typically for considerably less than a Model 3) but after that you’re on your own. That’s not reassuring to Americans doing the cold calculus on the pros and cons of buying an EV.

If GM and other traditional automakers want to convince consumers to quit a gas habit they’ve been very comfortable with their entire lives, they’re going to have to do more than just sell an EV.

Tesla has known that from day one. GM did not. Ditto on the other traditional carmakers — though Volkswagen, with prodding from the U.S. government and California, is behind the rapid buildout of Electrify America charging stations in the U.S. 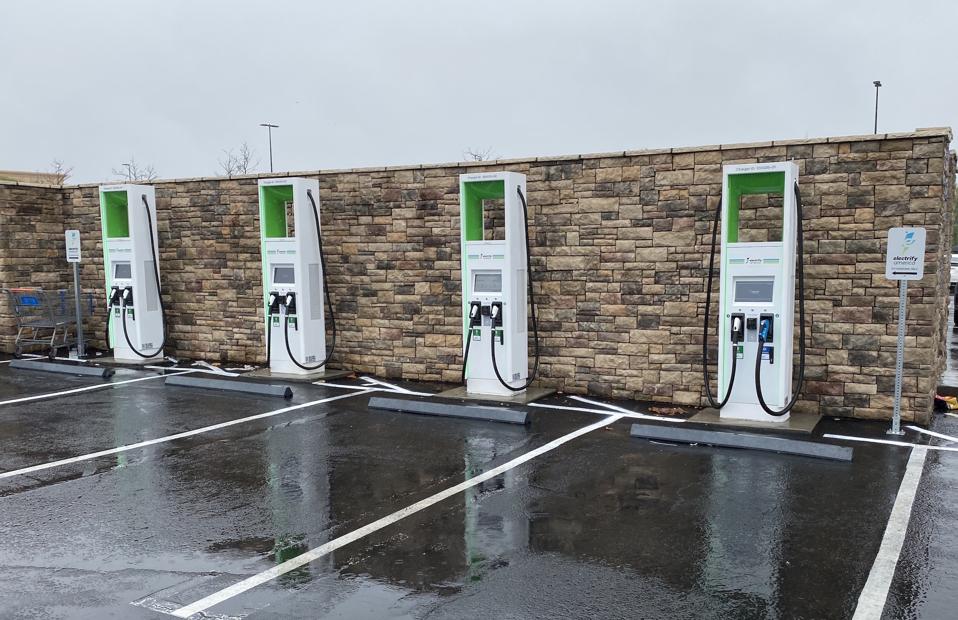 Electrify America at Walmart in Santa Clarita, Calif. There are a total of 6 fast chargers (there … [+] two more chargers closer to the front of the store — see photo at bottom).

EA has been building out its charging network at a furious pace over the last couple of years.

“Electrify America is building out their network at a faster [rate] than anyone else in the United States,” said Eric Way, who hosts the News Coulomb YouTube channel, which provides reviews of fast-charge locations.

The company is investing $2 billion over 10 years in Zero Emission Vehicle infrastructure, education and access, according to a statement from EA.

“We have more than 410 charging stations installed Nationally with about 1800 chargers at those stations,” an Electrify America spokesperson told me this week.

“A subset of the numbers above — we now have more than 100 stations installed in California with about 400 individual chargers at those stations,” the spokesperson added.

And Electrify America is even installing fast chargers at gas stations such as the Shell station in Firebaugh, Calif.

We’ll see how this shakes out in the next 18 months or so. Tesla, starting in 2012, has been relentless in building out its Supercharger network. Currently, Tesla’s Supercharger site claims 1,870 Supercharger Stations with 16,585 Superchargers globally with roughly half of them in North America. That seems almost unassailable at this point and all the more reason for companies like General Motors to get behind the build out of a major nationwide charging network. 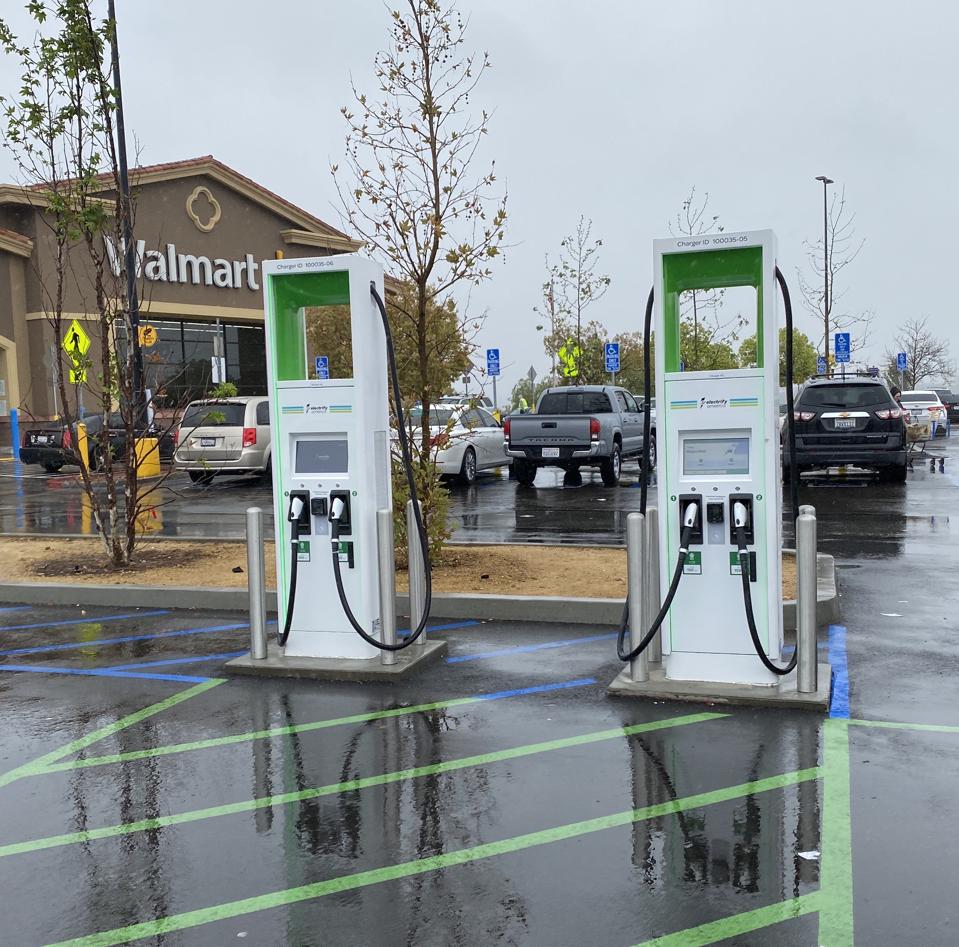