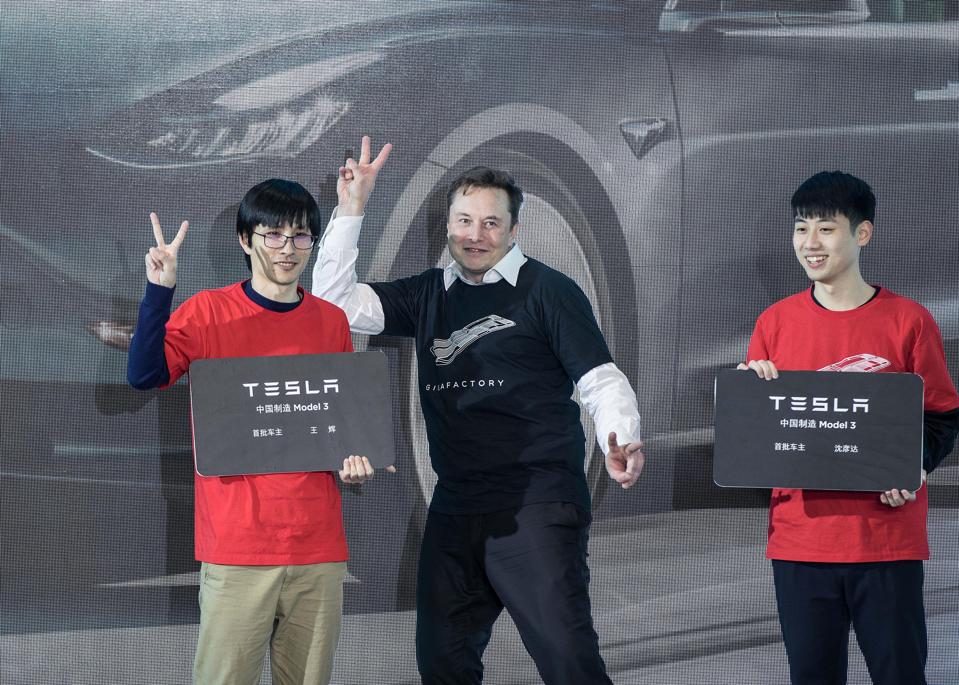 Over the past three months Tesla’s shares look like a SpaceX rocket ship launch. After hitting a low of $179 on June 3 last year, the stock got an initial boost on October 24; the day after the company announced a surprise profit for the September quarter. The shares rose from $255 to $328 in two days or 29%. 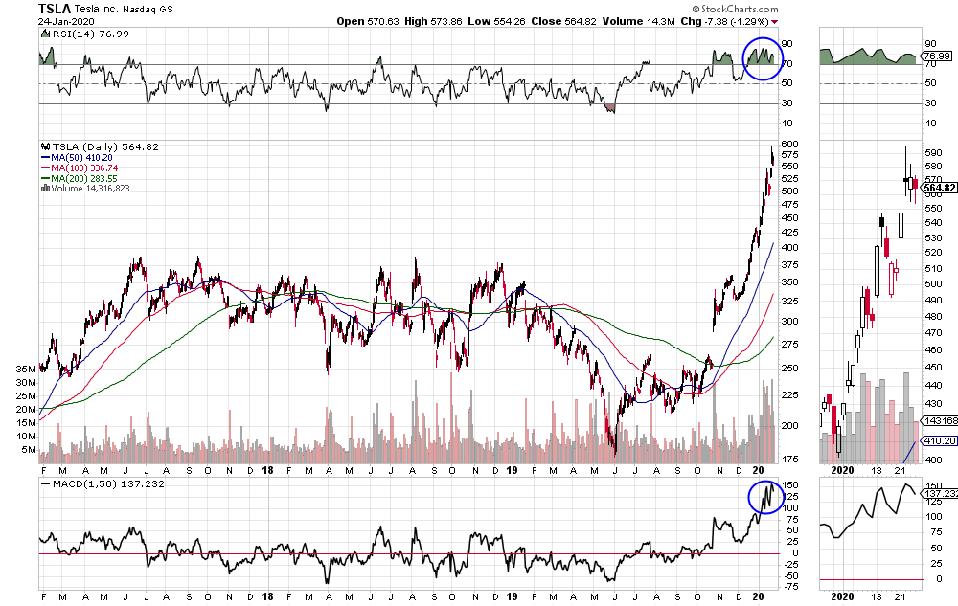 Short covering has not been a catalyst for the recent move

There has been a lot of speculation that investors who sold Tesla shares short were buying them back and helping juice the stock price. Ihor Dusaniwsky at S3 Partners analysis (seen in the graph below) indicates that short covering helped the initial rise in late October, but that this activity has not been a large help to the 35% increase in January or the move 69% move from December 10.

You can see this in the number of shares that were and are currently shorted, the gold line in the graph. The short interest peaked when the stock hit its early June low at about 44 million shares. This was about 30% of the company’s float of 142 million shares.

Over the next five months the shorts decreased their position to under 38 million shares as the stock did recover some from its early June low. They covered or bought about 6 million shares in a few days after the positive September quarter results and decreased their exposure another 5 million shares to approximately 27 million currently. With an average trading volume of 12 million shares this has helped the stock. However, it seems that incremental bullish investors have had a greater influence, especially over the past month.

Dusaniwsky pointed out that, “Surprisingly, the multi-month Tesla squeeze has taken a breather even as Tesla’s stock price rallied over 38% in 2020. Short sellers added over 380,000 additional shares short during the year.” He added, “This is true price strength from long buying and not a temporary price surge caused by short covering.” 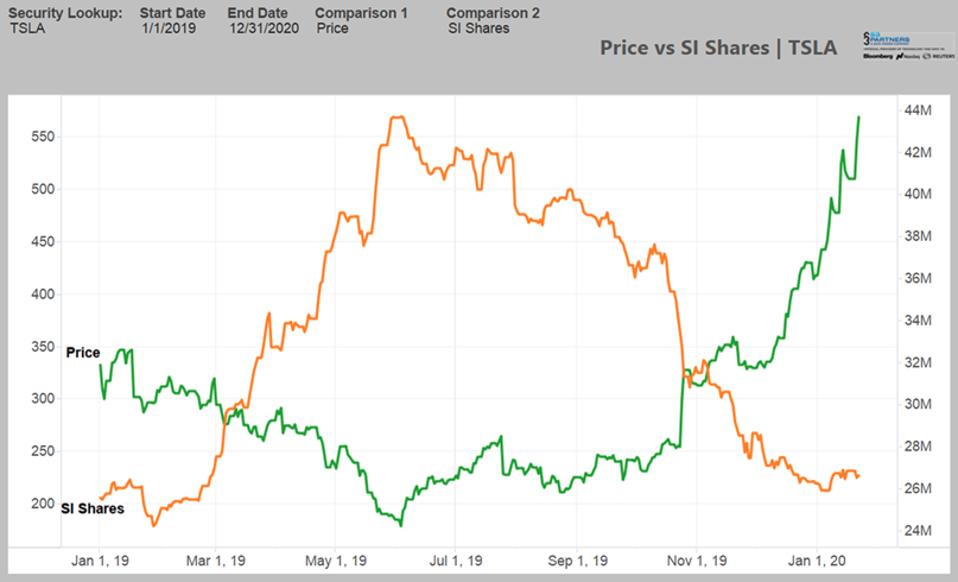 There are a number of catalysts that have helped Tesla shares move higher the past month and a half. Probably the biggest is Tesla’s China plant starting to deliver Model 3’s in early January. There have also been reports of the Model Y starting production in China at the same time.

On January 6 the stock closed at $452. On January 7 in China Elon Musk showed off his dance skills at an event initiating Model 3 sales to 15 Tesla employees who bought the car. Over the next six trading days to January 14 the shares moved up $86 to $538, an increase of 19%.

Then on January 16 WheelsJoint.com had an article showing how the Model 3 has put a major dent in the U.S. luxury sedan market. Pretty much across the board; Mercedes, BMW, Audi, Infiniti and Acura have seen their sales fall after the Model 3 was introduced. Tesla shares have increased $46 or 9% since the article was published. 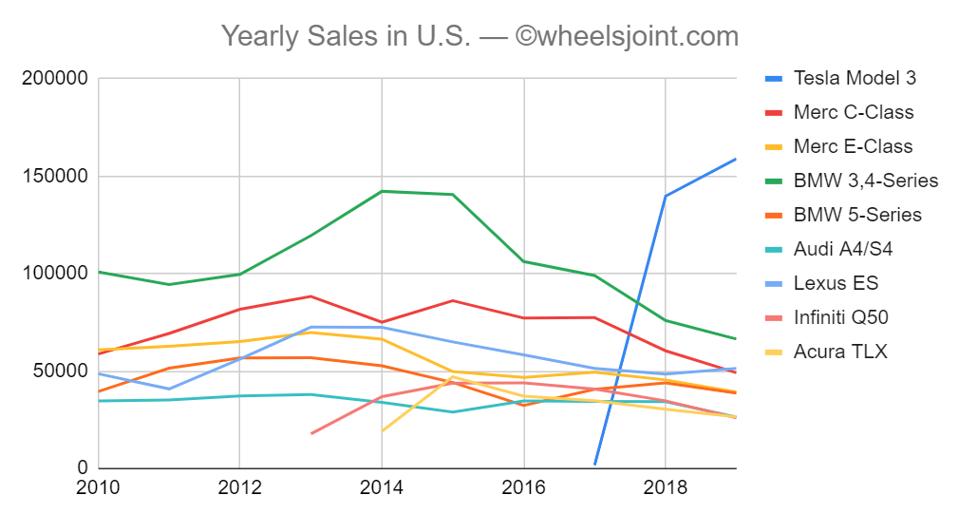 Tesla Model 3 sales vs. the competition

Next week is critical

Tesla is set to announce its December quarter financial results this coming Wednesday, January 29, after the market closes. Given the meteoric rise in the shares, investors are hoping that it doesn’t become a parabolic shape since the shares are very overbought (as shown by the blue circles in the earlier price chart).

‘Arrow’ Is Saving A Diggle ‘Green Lantern’ Reveal For Its Finale, Says Actor

Earnings Preview: What To Expect From Delta Air...

6 Considerations For Retirees To Pay Off Your...