Breaking
Google Meet’s Unlimited Calling Will Continue To Be...
The Need For Speed-Is Quantum Computing A Good...
Stock Market Crash: The End Game Approaches
Best Video Conferencing Software
For These Indigenous Artists “Land Back” Is Both...
The Current Tech Stock “Bubble” Reflects Pessimism, Not...
A Look At What’s Inside House Democrats’ New...
Page Authority 2.0: An Update on Testing and...
How Public Health Experts Are Harnessing The Power...
This Husband And Wife Built A Luxury Brand,...
This Husband & Wife Built A Luxury Brand,...
Luxury Footwear Brand Chelsea Paris Re-Launches And Stays...
The 30 Upgrade Module ‘Avengers’ Farm Trick You...
50 Years After Milton Friedman, Where Does Capitalism...
House Prices To Rise Through The Recession As...
Is An Internet Service Provider Revolution On The...
Home Business Texas Children’s Hospital Starts Admitting Adult Patients As Coronavirus Cases In The State Soar To Record Levels
BusinessTechnology 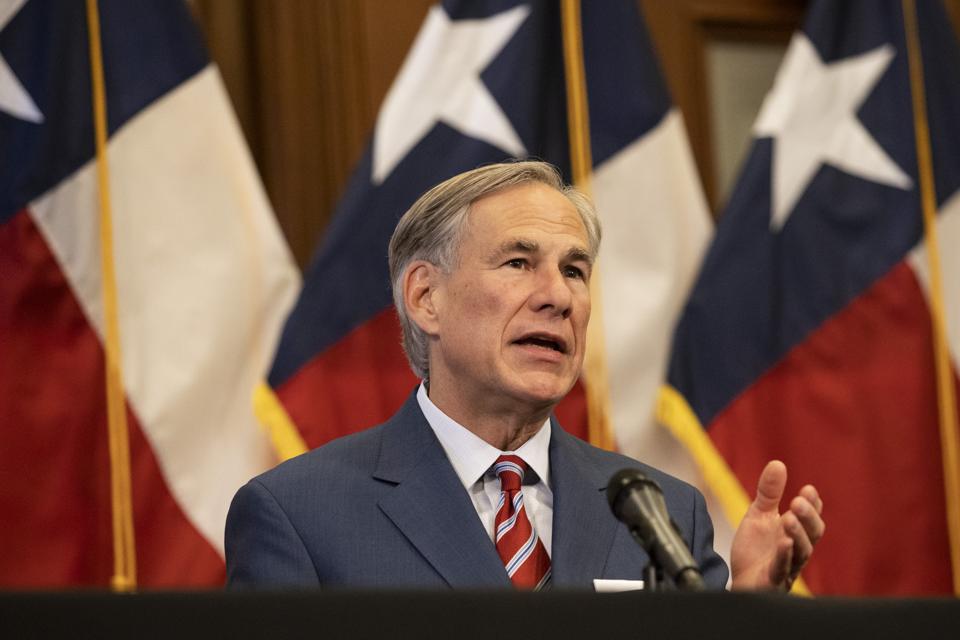 Texas Governor Greg Abbott announces the reopening of more Texas businesses during the COVID-19 … [+] coronavirus pandemic at a press conference at the Texas State Capitol in Austin on Monday, May 18, 2020. (Photo by Lynda M. Gonzalez-Pool/Getty Images)

Texas Children’s Hospital in Houston has started to admit adult patients as the state continues to grapple with quickly-surging Covid-19 case numbers.

On Sunday, Texas posted its highest case count since records began, recording 4,430 new diagnoses, similar to the number reported in the whole of Europe on the same day. Rumors about Texas Children’s Hospital taking adult patients were circulating online Monday evening and Monday night, the hospital released an official statement to Houston’s KHOU 11 network confirming the news, with doctors at the hospital also posting about the change on Twitter.

The hospital will take adult patients both with and without Covid-19 in an attempt to relieve the pressure on other hospitals in the area. The move was part of an organized contingency plan to be put into place should the State experience a rapid rise in cases. Admitting adult patients to children’s hospitals has been done during significant outbreaks in places such as New York City and Chicago, but many see this step as an indication to just how bad the outbreak is becoming in the state.

Houston is served by the Texas Medical Center, a 2.1 square mile complex of hospitals and healthcare facilities, making it one of the largest in the world with beds for 9,200 patients. That a city which already has such a large capacity center could be at risk of being overwhelmed, underlines for some just how badly the Covid-19 surge in the state has become.

Covid-19 cases in Texas have been rapidly rising over the past few weeks, with public health experts and physicians becoming increasingly concerned about the worrying rate of new cases and hospitalizations and hospitals elsewhere in the state trying to increase capacity. Many physicians and public health experts have been urging Texas Governor Greg Abbott to intervene sooner, rather than later to try and slow down the rise in cases by rolling back re-opening plans.

“To state the obvious, COVID-19 is now spreading at an unacceptable rate in Texas, and it must be corralled,” said Governor Abbott at a news conference at the State Capitol in Austin on Monday.

Despite this acknowledgement of the severity of the issue, he indicated no shutdowns of business or lock downs were imminent, but conceded that he would need to take action if the situation continued to worsen.