Breaking
How To Delegate Effectively
Stock Market: Two New Trends Shaping Next Buying...
Apple iOS 14.0.1 Release: Should You Upgrade?
Social Media Marketing Consulting
What You Need To Know About Your Startup...
Governor Signs Landmark Student Loan Borrower Protection Bill...
Reddit Co-Founder Alexis Ohanian Plans $150 Million Investment...
This Week In XR: Enterprise Adoption And Financing...
The Disadvantages Of Aging In Place
How Advances In Customer Service Can Take Telehealth...
5 Reasons Why Your Startup Needs To Be...
Beyond-Professional: What Is The New Workplace Normal?
Manufacturing In The U.S. Is On The Cusp...
After 75% Rally, Johnson Controls Stock Looks Fully...
The Future Is Now: This Start-Up Offers Carbon-Free...
Eight Boxes To Check If You Want To...
Home Business Thalía’s World Is Full Of Love For New Artists, Passion Projects, Justin Bieber & BLACKPINK
Business 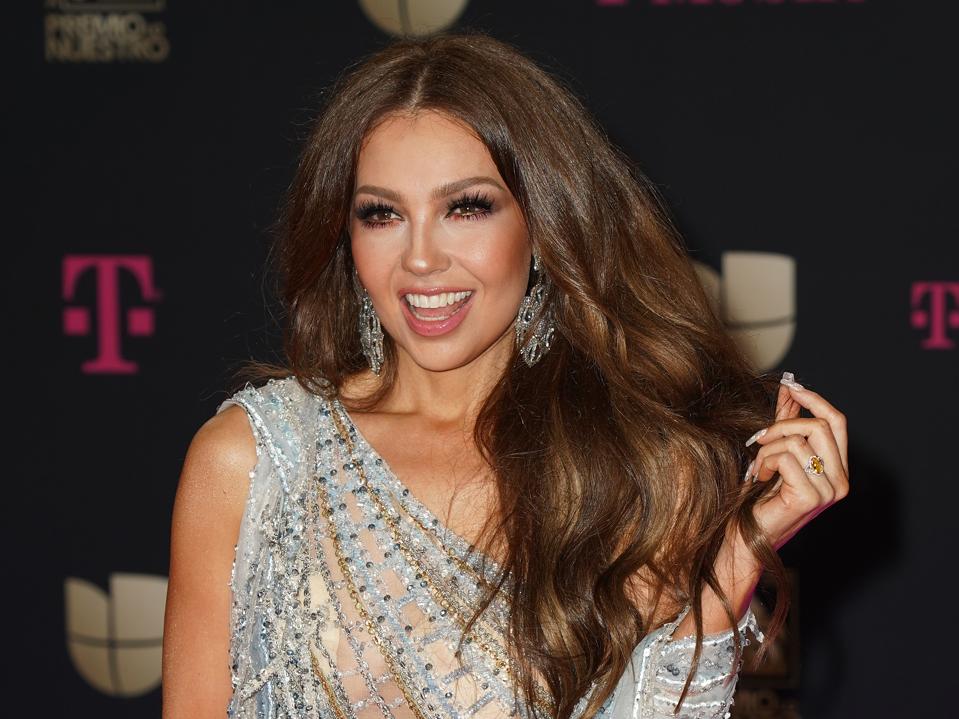 With almost four decades in show business that’s landed her chart-topping hits, multi-platinum albums, internationally beloved telenovelas, music that has crossed over into multiple languages and an undisputed title as the Queen of Latin Pop, Thalía has little to prove—and she knows it.

But instead of resting on her laurels, the Mexico City–born diva is doubling down on innovating in a way that is most pleasing to her and has been since the start of her career. Whether it’s been enlisting rising Latin-pop talents like singer-songwriter duo Mau y Ricky (who feature in her new single “Ya Tú Me Conoces”) or Pabllo Vittar (who recorded a “hardcore” track with Thalía) or even a vampy magazine photoshoot that recalled the imagery of her earliest albums, Thalía blazes ahead in her path with ambition of an hustling up-and-comer combined with the regality of a pop royal.

Walking into the room during her press day at Sony Music headquarters for “Ya Tú Me Conoces,” the diva has already been in interviews for an hour—with several outlets still lined up to talk with her—but greets this reporter with a light-hearted warmness and specificity when speaks, emphasizing certain words to make sure her deeper points are not lost even through the casual tone. She’s a professional but still willing to have fun, translating some of her favorite comments to her diverse staff and is happy to dance out a K-pop song’s choreography when she’s trying to remember the name. Yes, Thalía’s excited about everything she’s already prepared for her upcoming album but she can get even more excited about the next grand plan in her head.

Forbes spoke to Thalía about her new single and upcoming album, but ended up learning a whole lot more about the Latin-pop queen than just the next project. Read on below.

Jeff Benjamin: Already I feel this great energy from you. Before we even get into the new music, I’m curious how you have this positive vibe at all times?

Thalía: What’s the trick? Coffee, coffee and coffee! And water—water, water, water! No, you know what I think it is? So many years of being in front of the camera and being an artist, starting as a child, that it’s basically just like an instinct. It’s basically like a pattern of like a survival, a pattern that gets activated. When I’m going down, something inside of me triggers like, “Okay, get extra energy because we have to finish and we have a responsibility.” There is something more subconscious that triggers.

Benjamin: Some people may say that would be a bit robotic of an approach, but you always seem to be enjoying yourself.

Thalía: I think it’s also trying to have a positive input, somehow. When I get tired, I then think maybe somebody is going to listen to this interview who is maybe fighting bullying or fighting somebody oppressive at home or in a bad marriage, a bad childhood, you know? And that’s what makes me find strength within to try and do good, and give a good message. I really feel like somebody could be behind that camera or be reading this piece or be behind their phone that is in a bad, bad situation.

Benjamin: Tell me what went into creating “Ya Tú Me Conoces.”

Thalia: Bueno, I met them before. They gave me an amazing ballad “Por lo Que Reste de Vida,” which is one my most-viewed videos and that song is amazing. So they knew that I had been been looking for new material during the last year and that I’ve been in the studio, I’ve been in writing camps, writing and producing songs. They wrote the song for me and sent it to me. It was a demo with their voices, I listened to it and I was like, “I love this song. Tell them, ‘Don’t show this song to anybody—that is mine! But can you also tell them that I really love what they did with the vocals—the input, the freshness, the complexity that they have. I would like to add my voice into it instead of just singing it.”

Benjamin: I love how open-minded Mau y Ricky are to really create a world with their collaborators shine. Female, male, new, established, reggaeton, pop, they’re really versatile. Did you feel that openness working with them?

Thalía: I felt that and that’s one of the things that I like also about them because I’m like that. I love to add that extra into the song. Some songs are just mine and I get very jealous and selfish: this is mine, I don’t need anybody, I don’t want anybody, this my land. But some other songs, I feel like, “Oh, my god, this could sound even more over-the-top if they have this person. And I find that person and then I just DM them or getting through whatever or whoever can get me into that person. I send them the invitation and a song, and they just jump on it.

Benjamin: You’ve sent personal DMs to people for work? That must be intimidating.

Thalía: Yes! Even in general, that’s what I like about digital and social media, you can just DM everyone. So many brilliant producers, actors, models, people in the fashion industry. I mean, it’s just like, “Oh, my god, I really love this piece and that collection that you just launched in Paris is phenomenal.” And they write back! Sometimes it’s like “Oh, my god, I love you. I watch your movies, I love your song, I’m Mexicana…”

Benjamin: When I look around you have a lot of women, people of color, sexual minorities, all around you. As you’re reaching out and creating your world, is there a conscious decision to make this happen?

Thalía: I think like from my first album, I was always like that: that voice of a woman who said very weird things that not other women did. I talked sexuality, sexuality, sexuality, then my first album and even my first single as a solo artist was forbidden on radio because it was all about—they say it was like, “sadomasochism”—because I was always explicit and out there and sexual. And right now, that’s what is in but back then, it was to express the feeling of all the young girls.

Benjamin: Are you back in that mindset with this new music?

Thalía: I always have that mindset because I’m always there. I just love that whole era. But at the same time, I’m always looking for freshness and new stuff, right? But my essence probably is in those first three albums of my solo career. That’s my essence and my structure as a writer, as a singer, as the music that I like and always come back to. Starting from there, it’s like this tree with all these different branches and and fruit.

Do you have more collaborations coming? Anything that would get your debut-era self excited?

Thalia: A lot! Get super excited because there’s a lot of surprises. There was one that I thought is going to surprise people, but then she posted a picture and everyone is very excited about it now. But the big surprise is Pabllo Vittar. I think that’s going to be super hot and super cool. You can’t imagine, it’s going to be hardcore powerful. Pabllo’s sweet but strong, and I love that. But I’m working hard on this new music, very excited, and that’s keeping the dream.

Benjamin: What do you feel you need to still prove at this point in your career?

Thalía: I don’t need prove anything, that’s the thing. I have to prove that I don’t need to prove because I don’t need to prove anything. I just need to be happy. And what makes me happy in the moment, talking about music or my fashion designs or my jewelry or my home collection or whatever it is, what makes me happy is what people react to. When it’s something that is more about the strategy, it doesn’t work because people feel “that’s too pushy.” When it feels like you have to prove them wrong or that you have to do these things…no, I just do it because it feels it natural.

Benjamin: Looking a bit outside of your music. Justin Bieber recently shared his Lyme disease diagnosis which you’ve also battled. I’m wondering if you saw the news and if you had any comforting words?

Thalía: You know, I had just heard [his new] music, then saw his picture and his post. My eye is not trained to see criticism or negativities, so I didn’t see or read anything about what they said about him before this, but when I saw his post, my impulse was [to say]: The whole Latin community is with you because we totally get it. We totally get it. What you’re going through, this very unfortunate, but it’s bringing a big look into this disease and we have to just talk about it. [Ed. Note: Several medical studies published in the last decade have noted Hispanics are more likely than non-Hispanics to experience and be affected by Lyme disease.]

Who else would people be surprised to know you’re listening to?

Thalía: Who is strong in Korea right now? The girls…

Thalía: I love BLACKPINK! I love BLACKPINK. That’s my next collab—that’s my next fucking collab. I love that song [sings the instrument part of the chorus of “Kill This Love”]. You’re hearing it first! Let’s do it, I’ll DM them. [Laughs] And then let’s do promo there. Because I believe the Korean music community also loves Latin music. They love dance, they’re very passionate about our culture, I feel like they understand our aura. Now, I’m so excited!

March Madness 2020: How To Spice Up The First Four Games In Dayton