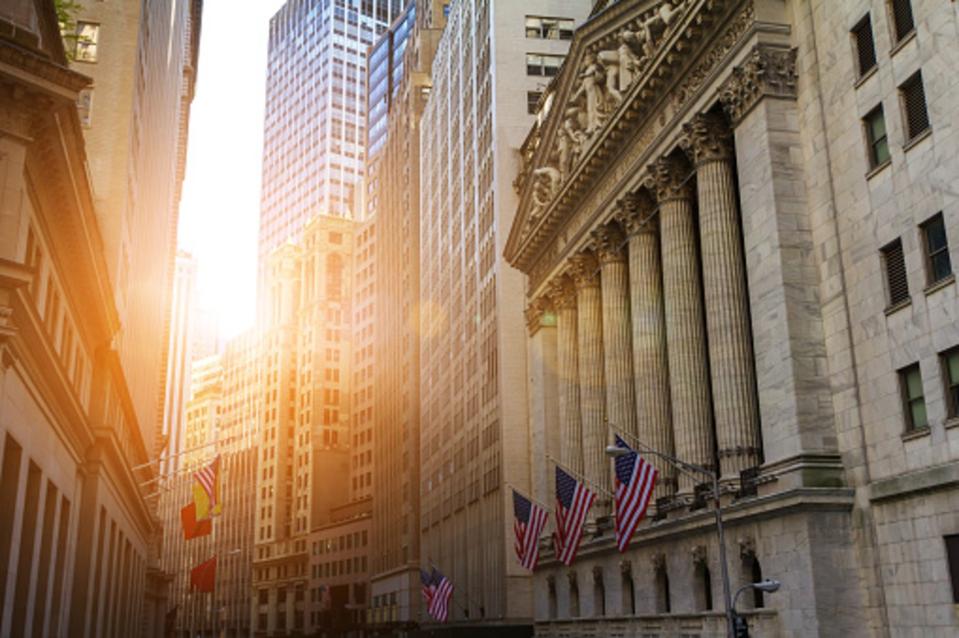 Stocks sizzled Monday, with major indices racing to their biggest daily gains since 2018 and scrambling back above some key psychological levels as investors swooped in to buy beaten-down shares. The S&P 500 Index (SPX) climbed 4.6% to close above key moving averages that had looked like they might be far-off resistance when the day began.

The SPX is now knocking on the door of 3100 after dropping under 2900 last week. The index has now advanced more than 18% from last week’s low point and has clawed back nearly half of last week’s losses.

Apple (AAPL) and Microsoft (MSFT) led the parade as hopes for a Fed rate cut and ideas that the market had gotten oversold injected a double-dose of optimism following last week’s historic sell-off. Consumer Discretionary also helped show the way as the SPX enjoyed its first positive day in nearly two weeks. AAPL shares rose 9% and came nearly back to $300, while MSFT had a 6% rally.

Looking specifically at AAPL and its huge rally Monday, it was a little bit outsized from what many analysts probably expected. The buying might be a bit overdone considering all the concerns about supply chain, which is a big reason AAPL shares sold off more than 20% from their high at one point last week.

Chances of a 50-basis point Fed interest rate cut stand at 100% in the futures market, so the probability is definitely being baked into the cake. That could be a big reason why this incredible rally took place today.

Still, you almost have to feel a little sorry for Fed Chairman Jerome Powell, who’s never done 50-basis point cut before and doesn’t seem particularly comfortable with making big moves like that, especially since he’s maintained a “data-dependent” stance, and the data has yet to manifest itself.

He’s kind of in between a rock and a hard place. If he doesn’t cut by 50, the market would likely sell off. If he does cut by 50, investors would probably want to know what’s next. At this point, neither Powell nor anyone else can say, but it is nice to see some signs of the virus spread being contained as case growth in China slowed.

Bonds Could Be Determining Factor

Anyone wondering when things might get back to “normal” in the market first of all needs to be patient. “Normal” isn’t likely to return for a while, maybe months if the same pattern of volatility plays out that’s often seen after a big plunge.

That said, one key factor to watch is bonds. On Monday, bonds rallied right along with stocks. Until bonds back off and yields start coming back, it’s hard to imagine a sustained stock market recovery.

The 10-year yield spent much of the day Monday below 1.1% before finishing near 1.15%, compared to the Fed funds rate of 1.62%. It feels like the bond market is trying to force the Fed to cut rates, and as of now, futures trading indicates a 100% likelihood of a 50-basis point cut by the time of the Fed meeting later this month.

At the end of the day, people are still buying bonds. People want rate cuts but they also are buying stocks, so we have a bifurcation going on. At some point, that likely has to decouple, but for now it’s driving the market (see chart below).

Tomorrow morning could end up being a signpost, as G7 economic ministers are set to gather and central bankers will be on the call. This could provide some clarity around what the U.S. and Europe plan to do to address the economic side of things. The prospect of a possible stimulus out of that meeting—especially from Europe, which has the budget to do one—also helped drive stocks higher on Monday. Be tuned in for any announcement before the open tomorrow.

On the Virus Beat

In a positive sign on the virus front Monday, the illness seems to be pretty well contained in China. Businesses like Starbucks (SBUX) and Apple (AAPL) are back to operations there, and hotels are reopening. China is one of the big reasons AAPL and MSFT got early lifts today, and whenever you see stocks like MSFT, AAPL, AT&T (T) and Visa (V) having a good day, that’s encouraging.

In another encouraging bit of news, the virus seems mostly contained in Europe for now, outside of Italy.

Back home, construction spending rose a solid 1.8% in January, which is a huge number considering the virus outbreak and hints at a robust housing market. The problem with data coming in is that most of it was gathered before the virus fears really took hold. This includes the February payrolls data coming up Friday, much of which was collected in the first half of February. It might be better to look at the four-week moving average of weekly jobless claims due Thursday for a better sense of how these fears affected hiring more recently.

The Consumer Discretionary sector helped lead things higher earlier on Monday. Help there might have come from the virus, too, as stores like Costco (COST) enjoyed strong demand from U.S. consumers stocking up on emergency supplies. That’s in contrast to most apparel retailers, which continue to lag.

Right now people might not need a shirt, but most people can’t go without toothpaste, toilet paper, and other staples. That could explain why some apparel retailers didn’t get much of a lift. On the other hand, Walmart (WMT), Amazon (AMZN) and Target (TGT) had great days in part because they can deliver the staples people need and might be stocking up on. Colgate-Palmolive (CL) and Clorox (CLX)—two companies heavily involved in the “keeping you clean and sanitized” department—are doing well, too, because their products are distributed by those big-box stores. COST reports Thursday, perhaps providing an up-close view of that stock-up trend.

TGT reports tomorrow morning, by the way, along with Kohl’s (KSS) and Nordstrom (JWN). It’s a tough time for apparel retailers. They just can’t catch a break. Ralph Lauren (RL), however, is up a bit today. No one has a full handle on the situation, and the various retail companies are sending mixed messages.

There continues to be a lot of struggle in some parts of the market as the new week gets going. The Transports and Energy remain in the dumps, with airlines, hotels, cruise lines and entertainment companies like Disney (DIS) and restaurant chains like Chipotle (CMG) having trouble Monday. Financials are still trying to find their footing, and several major companies postponed their analyst meetings due to the virus, including United Airlines (UAL). New cases and deaths continue to pop up across the U.S. and Italy.

Fear of the virus hasn’t gone away, but fear in the markets retreated Monday as the Cboe Volatility Index (VIX) fell to around 33 on Monday afternoon after testing two-year highs near 50 last week.

In a hint that many investors remain cautious in these volatile markets, some of the sectors often seen as less vulnerable to whipsaw trading like Real Estate, Staples, and Utilities outperformed on Monday. What this might tell you is people are starting to come back into equities after last week’s blowout, but they’re doing so cautiously. Utilities rose nearly 6% in one day, which is pretty much unheard of.

Some people find technical indicators a little confusing, which is understandable. At times like these, however, they’re arguably worth a closer look as investors try to get a sense of why things happened the way they did and which direction the ball might be going down the field.

Here are a few technical things to consider keeping in mind for perspective:

●       The Relative Strength Index (RSI)—a momentum indicator that compares the magnitude of a stock’s recent gains to its recent losses to help determine if price is oversold or overbought. RSI is measured on a scale from zero to 100 and is pointing toward a possible short-term bounce. About 90% of stocks in the S&P 500 (SPX) had an RSI below 30 as of this morning, and the lower the RSI, the more oversold a stock is considered.

●       The buying and short-covering interest that appeared to enter the market during the last hour on Friday appeared to flow into Monday’s session. If you recall, the bottom in the SPX Friday was near 2850, just below the level that marked a 50% retracement of the rally from the lows of December 2018 to the highs of February. The ability to hold this level going forward might be a healthy signal.

●       There were three “Major Distribution Days” last week that featured down volume of 90% or more. That seems to hint at a short-term “washout,” according to my fellow TD Ameritrade Network* contributor Michael McKerr. The SPX took out a first area of resistance Monday near 3050 (right around the 200-day moving average). Above that, McKerr sees resistance in the range between 3170–3250.

●       One reason stocks fell so sharply last week is because the SPX had gained so fast, leaving clear technical support well below the market. The market now appears to have more of a net below it, but past downturns like the one in December 2018 have often shown a quick bounce followed by a retest of the lows. So another leg back down toward the lows of late last week is certainly possible. A bounce after that, assuming it lasts, would look constructive from a chart perspective and possibly build investor confidence.

Voting Tomorrow Could Shift the Focus

Tomorrow is Super Tuesday in the Democratic primaries. Some analysts think that if Sen. Bernie Sanders starts to pull away with a large delegate count, it’s possibly going to weigh on stocks because many investors consider him unfriendly to business. The market impact could be worse for certain industries like pharmaceuticals, defense contractors, and the Energy sector, based on policies Sanders advocates.

On the other hand, strong showings from Sanders’ main competitors who have more moderate reputations might help lend stocks a boost. It’s going to be interesting to watch, whatever the outcome. The exits of two major moderate contenders yesterday and today narrow the field and might have helped the markets a bit Monday as some investors could be hoping voters coalesce behind a major Sanders challenger.

Sometimes a negative number can have a silver lining. Take today’s U.S. manufacturing PMI for February from the Institute for Supply Management (ISM). It showed the headline figure dropping to 50.1%, down from 50.9% in January and a little worse than the average analyst estimate gathered by Briefing.com.

So what’s good about it? Well, mainly it stayed above 50%. That’s the level that marks the line between contraction and growth, and it was the second month in a row of expansion after several months of contraction late last year.

The positive read came despite concern voiced by some of the respondents about the coronavirus in February, and also follows some disappointing services data last week that added to Wall Street’s struggles. 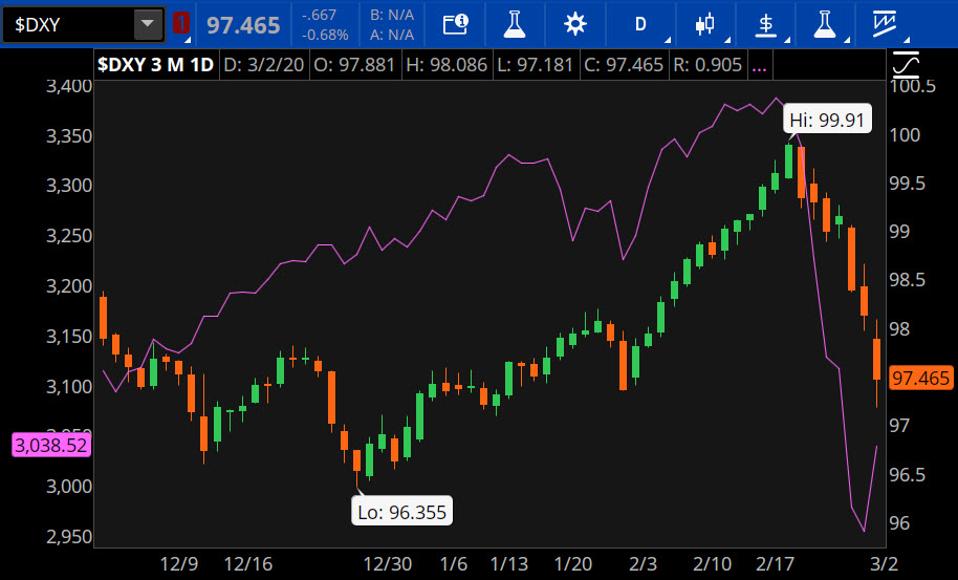 CHART OF THE DAY: GREENBACK SLIDE. As indices including the S&P 500 Index (SPX—purple line) slid … [+] over the last week, the U.S. Dollar Index ($DXY—candlestick) went south as well. However, though stocks raged back Monday, the dollar continued to slide, as lower interest rates across the board helped dampen demand for dollar-based assets. Data source: ICE Data Services, CME Group. Chart source: The thinkorswim® platform from TD Ameritrade. For illustrative purposes only. Past performance does not guarantee future results.

Seeking All Sustainable-Insurtechs To Help To Take Action