The 10 Best Chicago Cubs Of The Last 10 Years 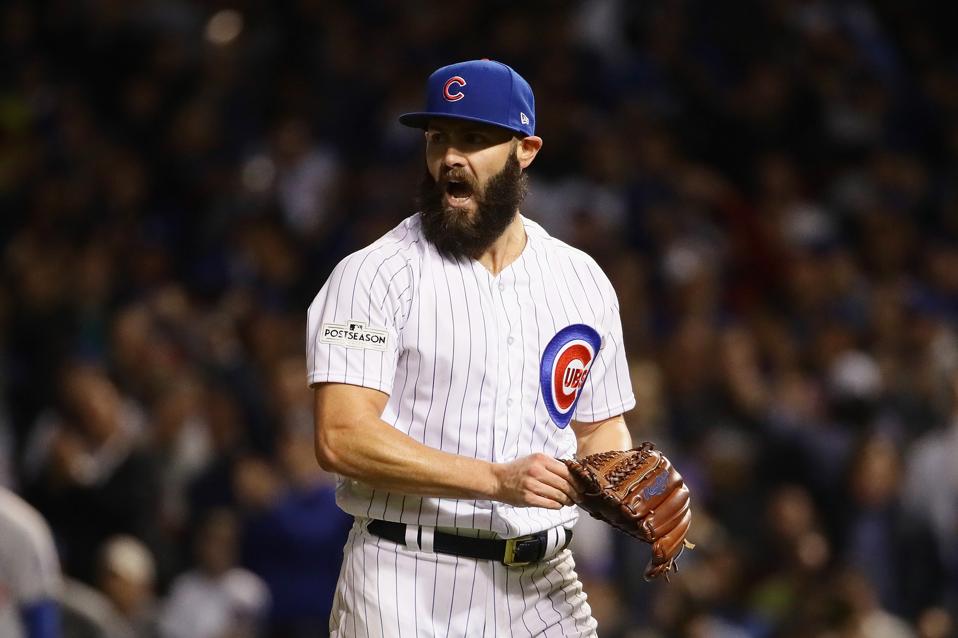 CHICAGO, IL – OCTOBER 18: Jake Arrieta #49 of the Chicago Cubs reacts in the middle of the sixth … [+] inning against the Los Angeles Dodgers during game four of the National League Championship Series at Wrigley Field on October 18, 2017 in Chicago, Illinois. (Photo by Jonathan Daniel/Getty Images)

Not only are we coming up on the end of 2019, but also the end of the decade. The teens will soon be over, making way for the ’20s. As such, it’s proper to look back on the last 10 years in Major League Baseball. For the Cubs, this decade brought a lot of ups and downs.

They had five losing seasons and five winning seasons. They lost over 100 games in 2012, then won over 100 games in 2016. They drafted Kris Bryant, traded for Jake Arrieta and Anthony Rizzo, and won the World Series. But for now, let’s keep a focus on the good. Here are the 10 best Cubs from the last 10 years, as measured by Wins Above Replacement.

It’s pretty impressive that former Cubs catcher Geovany Soto made this list, considering that he really only had one truly great season with the team in the past decade. Somehow, from 2010 through the middle of the 2012 season, Soto was worth 8.6 WAR (according to FanGraphs). That has to have a lot to do with his defensive abilities. In 2010, Soto hit 17 homers with a .890 OPS in 387 plate appearances, but the following two years combined he had just a .674 OPS.

Notable Moment: On June 30, 2011, Soto pinch-hit in the bottom of the 13th inning at home against the Giants. Two men were on and two were out, and Soto drilled the pitch from Ramon Ramirez into the bleachers for a walk-off, three-run homer.

There is a stigma regarding Kyle Schwarber’s defense in the outfield that has been tough for the slugger to shake. The prevailing thought is that Schwarber is awful in left, and early in his career that was the case. But he has been decidedly average the last two years, and when paired with his 64 homers and .849 OPS over that stretch has resulted in a respectable 5.8 WAR. Overall since arriving in the big leagues in 2015, Schwarber has totaled 9.1 WAR with 110 homers.

Notable Moment: Following a brief rain delay, Schwarber lead off the top of the 10th inning in Game 7 of the 2016 World Series with a sharp single to right field. He’d be pulled for a pinch-runner, but that runner would come around to score the winning run.

Regardless of his exceptional 9.4 WAR in a Cubs uniform, it’s impossible to bring up shortstop Addison Russell and not mention his domestic violence suspension. That, in addition to the ascent of Javier Báez and Russell’s declining play in the field, resulted in the Cubs non-tendering the 25-year-old this winter. In 2016, however, Russell clubbed 21 homers and played stellar defense, helping the Cubs win their first World Series title in 108 years.

Notable Moment: With the Cubs up 3-0 in Game 6 of the World Series, but trailing the series 3-2 on the road, Russell helped give the team a little breathing room with a third-inning grand slam off right-hander Josh Tomlin.

Before Russell arrived in Chicago, the Cubs starting shortstop for most of the decade had been Starlin Castro. For as flawed as he is, Castro was often a lone bright spot on a depressing Cubs team. He came to the big leagues with a bang as a 20-year-old in 2010, hitting two home runs against the Reds and driving in six runs. Castro accumulated 11.4 WAR in a Cubs uniform from 2010-2015, and overall he had 1,617 hits in the decade.

Notable Moment: With the 2015 NLDS against the Cardinals tied 1-1 and the Cubs trailing 2-1 in Game 3, Castro unloaded a monster home run to left-center off St. Louis starter Michael Wacha. The Cubs would go on to win both Game 3 and the series.

There were some who thought that Báez may never figure it out in the major leagues. They were wrong. After his call-up to Chicago in 2014, Báez struck out 41.5 percent of the time in 229 plate appearances. But over time, the middle infielder worked on his swing and eventually was able to pair his prodigious power with his slick defense. He came in second in the 2018 NL MVP race, and has accumulated 13.9 WAR as a Cub. Today, Báez is one of the most electric players in the game.

Notable Moment: In Game 1 of the 2016 NLDS against the Giants, Báez connected with an eighth-inning pitch from Johnny Cueto and drove it through a stiff wind and into the basket in left field. That broke a scoreless tie and gave the Cubs a very important 1-0 victory.

The moment that truly legitimized the Cubs was when Jon Lester signed his six-year, $155 million contract in the winter of 2014. Although he was already 31 when he arrived, Lester provided a handful of great seasons before beginning to decline. He has been worth 16.7 WAR over five years, which includes a second-place finish to Max Scherzer for the 2016 NL Cy Young award. Overall, he has a 3.54 ERA in 941 2/3 innings as a Cub.

Notable Moment: Lester came out of the bullpen in Game 7 of the 2016 World Series and tossed three innings of relief, helping to bridge the gap between the starter and the closer. It didn’t all work out like Joe Maddon had wanted, but Lester was a vital part of the win.

Jake Arrieta was the diamond in the rough that Theo Epstein badly needed to find. He was acquired from the Orioles in 2013 before the trade deadline and almost immediately turned around his career. Arrieta’s second half in 2015 was insane, going for a 0.77 ERA over his final 16 starts and clinching the 2015 NL Cy Young award. Overall, Arrieta had a 2.73 ERA in 803 innings with the Cubs and 18.3 WAR.

Notable Moment: On August 30, 2015, Arrieta went to the mound a Dodger Stadium on Sunday Night Baseball. The Cubs scored two runs in the top of the first inning thanks to a Kris Bryant two-run homer. Arrieta made that 2-0 score hold, throwing his first career no-hitter with 12 strikeouts and just one walk.

Although he’s often overlooked by pitchers with better velocity, Kyle Hendricks has quietly been one of the best pitchers in the game since arriving with the Cubs in 2014. Among starters with at least 600 innings over the last six years, Hendricks ranks No. 8 in baseball with a 3.15 ERA. He finished third in the NL Cy Young voting behind Scherzer and Lester in 2016, despite leading the league with a 2.13 ERA. Hendricks has 19.2 WAR in a Cubs uniform.

Notable Moment: Hendricks went to the mound in Game 6 of the 2016 NLCS with a chance to pitch the Cubs to the World Series. It was no easy task, facing off against Dodgers ace Clayton Kershaw. The Cubs right-hander responded with 7 1/3 shutout innings, allowing two hits and no walks with six strikeouts in the 5-0 win.

What can be said about Kris Bryant that hasn’t already been said thousands of times? He’s a generational talent. It’s no coincidence that the Cubs’ ascent to relevance ran concurrent to the third baseman’s arrival in Chicago back in 2015. Bryant won the 2015 Rookie of the Year and the 2016 MVP award, and of course, he also fielded the final out of the World Series. Bryant has a .901 OPS and 138 home runs in his five seasons, totaling 27.8 WAR.

Notable Moment: On June 27, 2016, Bryant had a record-setting game against the Reds in Cincinnati. He was 5-for-5 with three home runs and two doubles, totaling six RBI and notching the first “Full House” in major league history.

Anthony Rizzo’s first major league home run was in a Padres uniform, all the way back in 2011. But the Cubs acquired the first baseman that winter, and in eight seasons in Chicago he has hit 217 more homers. Rizzo also has a .273 batting average with a .862 OPS during that stretch, as well as a team-high 29.7 WAR. In 2019, Rizzo set career-highs with a .293 batting average and a .405 OBP.

Notable Moment: The Cubs and Cardinals were tied, 4-4, with two outs in the bottom of the sixth inning in Game 4 of the 2015 NLDS. Rizzo was at the plate, and lefty reliever Kevin Siegrist had him down 0-2. But Rizzo took a slider from Siegrist and deposited it into the right field bleachers, scoring what would ultimately be the winning run and clinching the series over St. Louis.

Is Now The Time For You To Find...

Budweiser Beer Made With Solar Energy, Thanks To...