The $250 Trillion Burden Weighing On The Global Economy In 2020 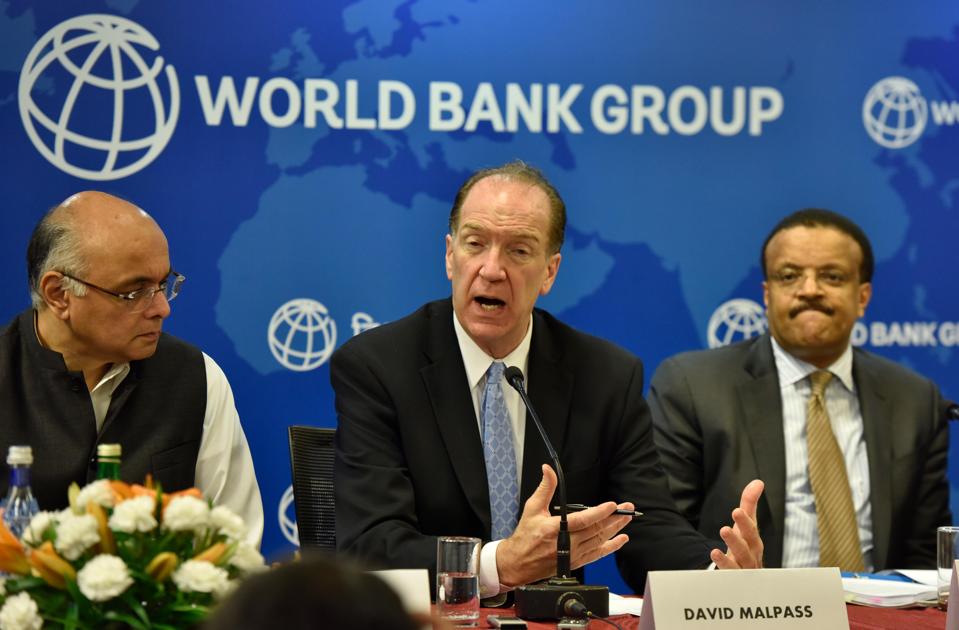 Concerns about global debt emanating from the office of World Bank President David Malpass are drenched in pot-calling-the-kettle-black irony.

Here’s a person who made his reputation at Bear Stearns of all places—a shop whose recklessness helped topple Wall Street in 2008. Malpass later went on to work for a Donald Trump White House seemingly determined to morph America into Argentina.

So, it’s a bit rich that now that he’s running the World Bank, Malpass, 63, senses the circles in which he once ran are creating troubles that could make 2008 look quaint. That’s particularly true here in Asia, a region that isn’t just on its own debt-issuance tear but most on the hook for Trump’s epic borrowing binge.

Better late than never, I guess. But Malpass isn’t wrong to highlight the $55 trillion of debt emerging markets from Asia to Latin America have churned out since the crisis that blew up Bear Stearns—and later Lehman Brothers. Worse, those are only the IOUs that have been booked officially as of the end of 2018. The tally excludes the last 12 months and whatever off-balance-sheet borrowing vehicles governments have been cooking up.

It’s not just the magnitude of debt, but the haste with which it’s being amassed. In a new study, the World Bank looks at the four most notable borrowing-binge episodes involving 100 countries since 1970. They include Latin America in the 1980s, Asia in the 1990s and the subprime fiasco of the 2000s. Those three, of course, ended in tears and financial ruin.

This fourth episode, though, may have the others beat. Since 2010, the collective debt-to-gross-domestic-product ratios of developing nations skyrocketed from 54% to at least 168%. “The size, speed and breadth of the latest debt wave should concern us all,” Malpass warns.

Now that he’s apparently among the converted, Malpass says the debt explosion of the last decade “underscores why debt management and transparency need to be top priorities for policymakers—so they can increase growth and investment and ensure that the debt they take on contributes to better development outcomes for the people.”

Fair enough as China’s slows toward the 5% growth range and governments from Malaysia to India grapple with excessive debt loads. But Malpass’s real quarrel may be with this former boss a few blocks away in the White House. 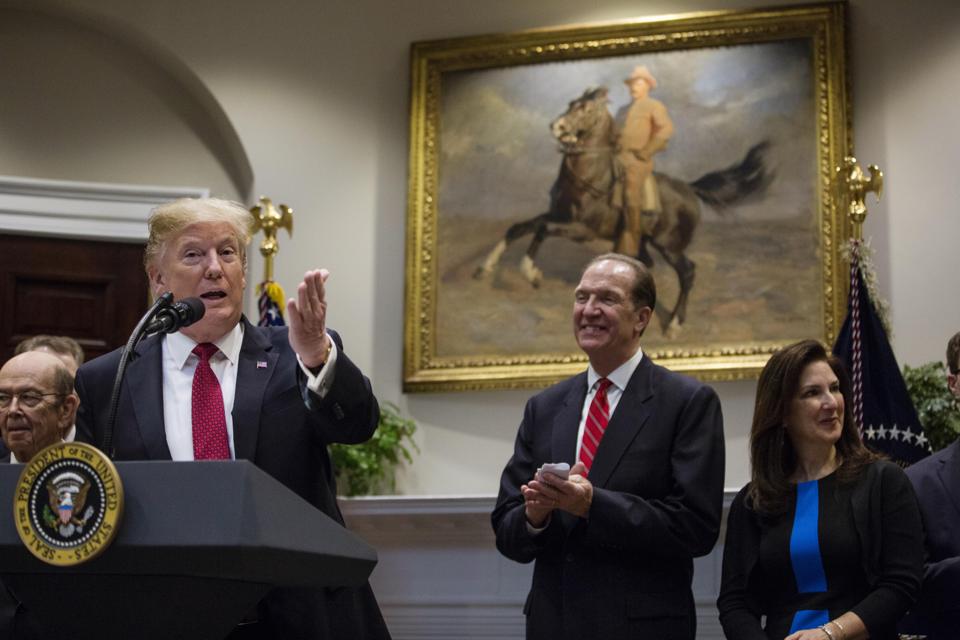 U.S. President Donald Trump introduces David Malpass, his nominee for the position of World Bank … [+] president, at a press conference in the Roosevelt Room of the White House in Washington, D.C., on February 6, 2019.

Trump, along with leaders in Europe, Japan and Britain, is doing more than his fair share of borrowing. In the first half of 2019, global debt blew past a record $250 trillion—and growing, according to the Institute for International Finance. While this debt tsunami began prior to Trump’s presidency, his trade war supercharged things.

A world economy top-heavy with debt is the last thing you want as its two biggest powers jab each other with tariffs and other barriers. The same goes for one of those powers (the U.S.) being addicted to the other’s (China) savings. As Trump pushes Washington’s debt past the $23 trillion mark and annual deficits well above $1 trillion, his team assumes Beijing will continue to lend it money.

China and Japan, after all, are America’s top bankers, each holding more than $1 trillion of Treasury securities. All it would take to shake world markets is for President Xi Jinping’s government to curb dollar purchases. This makes for a unique risk dynamic between Asia’s smaller economies and the globe’s biggest.

In October, the International Monetary Fund issued a sobering warning: about $19 trillion—or nearly 40%—of corporate debt in major economies could default amid a global downturn. That’s more than China’s annual $14 trillion of output and rivals America’s $21 trillion. Such a reckoning would make 2008 look tame by comparison.

The other worry is a dearth of shock-absorbers. Borrowing since then leaves limited fiscal space to stabilize growth. And central banks from Washington to Frankfurt to Tokyo are at, or close to, zero. That means the quantitative-easing rescue that saved the day a decade ago isn’t available in 2020.

None of this means 2020 will see a history-making debt crash. But the interplay between Trump and Xi raises the odds.

There’s zero chance, for example, that Trump is done with his tariff arms race. As the ink dries from any “phase one deal” he signs with President Xi, Trump will be back for more clashes, and not just with China. Japan, too, is in harm’s way, if Trump’s abusive relationship with South Korea is any guide.

First Trump demanded that Seoul re-open a trade deal in effect since 2012. President Moon Jae-in did just that, agreeing to allow Detroit to send more automobiles to Asia’s No. 4 economy. Now Trump is shaking Moon’s administration down for more protection money—demanding a 400% increase in what Korea pays for U.S. troops stationed on the peninsula.

Shinzo Abe’s Japan will be next. With impeachment risks increasing and the November election approaching, Trump has few, if any, legislative levers to excite his base. He’s also miffed that markets ignored the bilateral deal struck with Prime Minister Abe. Hence Trump’s desire for a “phase two” process with Tokyo, one that includes the risk of 25% taxes on cars and auto parts. Japan, meantime, hosts twice as many U.S. troops are Korea.

Yet China’s debt buildup is its own clear and present danger. It’s $30 trillion pile of credit and general opacity mean that when China does hit a wall—as all industrializing nations do—it will appear to come out of nowhere. Just as Malpass and his Wall Street ilk found a decade ago.

The thing about unsustainable debt episodes is that at some point the reckoning comes, invariably and suddenly. We can debate whether it will arrive in 2020. Less in dispute is that $250 trillion of debt leaves economies huge and small on a knife’s edge at the worst possible moment.