Breaking
7 Ways to Reduce Human Errors in Your...
How ‘Couples Therapy’ Used Technology To Cope With...
Can You Settle Your Student Loans Or Negotiate...
How to Use Amazon Attribution For Ad Campaigns
What are the Makings of a High-Quality Link?
How To Quickly Start And Scale Your Business
Terra Virtua: What NFTs Can Teach Us About...
5 Easy Steps To Prepare Content For E-A-T...
Physical Inactivity Linked To More Severe Covid-19 Infection...
The 2021 Estimated Tax Dilemma: What Tax-Return Pros...
Want To Digitally Transform Your Business? Start With...
How to Optimize Google My Business and Leverage...
Debunking Link Building Myths in 2021
How, When And Where You Can Gaze At...
SBA Opens $16.2 Billion Shuttered Venue Operators Grants...
What are the Essential Features of a Small...
Home Technology The 3 Solar Eclipses You Absolutely Must See This Decade, Including 2027’s ‘Eclipse Of The Century’
Technology

The 3 Solar Eclipses You Absolutely Must See This Decade, Including 2027’s ‘Eclipse Of The Century’

Earlier today a rare “ring of fire” annular solar eclipse took place just hours after the solstice. The Moon covered an astonishing 99.4% of the Sun at its peak, making is almost a total solar eclipse.

Here are all the best photos and videos of the “ring of fire”.

When is the next ‘ring of fire’ solar eclipse?

That’s key. Its brevity—a result of its magnitude—is very rare, with no equal coming up in the near future. The next time the Moon will create such a slim sliver around the Sun and cause another almost-total “ring of fire” eclipse will be on May 9, 2032, when for 22 seconds 99.57% of the Sun will be covered—so the ring will be even slimmer. Sadly, it will take place across a remote region of the south Atlantic Ocean.

The next annular solar eclipse in North America takes place in under 12 months, but it’s actually a total solar eclipse you should really be aiming to travel to see.

Why you need to see a total solar eclipse

Even the 2032 annular solar eclipse is not the eclipse you’re looking for. “Nothing —absolutely nothing—compares to a total eclipse of the Sun,” Paul Cox, Chief Astronomical Officer at robotic telescope service and “eclipse broadcaster” Slooh, told me. “There are no celestial events that so profoundly affect those who witness them, and for me, it’s always been an overwhelming experience, bringing me to tears—usually during our live broadcasts!”

What is the ‘path of totality?’

If you think that a 99% eclipse is OK, you’re doing it all wrong. You must get inside the narrow “path of totality” to experience a total solar eclipse. Only then will you enjoy the wonders of totality; rapidly dropping temperatures, quickly gathering darkness, drop-dead gorgeous “diamond rings” around the Moon, and a few minutes to gawp at the Sun’s outer atmosphere—the solar corona—spilling into space.

It’s not called “nature’s greatest experience” for nothing.

So here are the three “best” total solar eclipses taking place in the 2020s that you absolutely must plan a trip to—and they’re “once-in-a-lifetime” stuff:

MORE FROM FORBES50 Million People May Gather For The ‘Greater American Eclipse,’ The Most Watched Event EverBy Jamie Carter 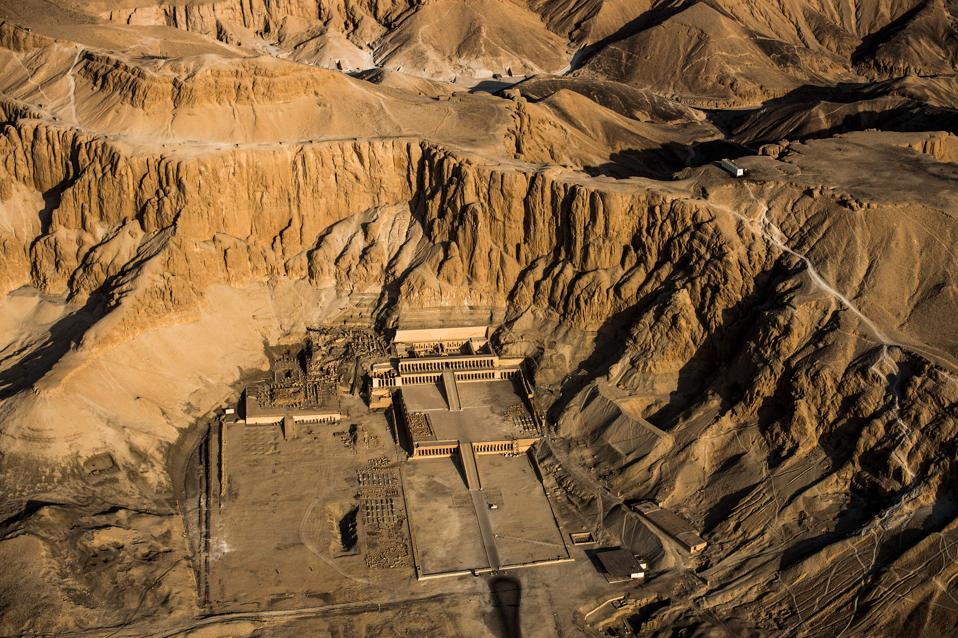 The Temple of Hatshepsut, also known as the Djeser-Djeseru (“Holy of Holies”) in the southern … [+] Egyptian town of Luxor. KHALED DESOUKI/AFP via Getty Images

Maximum duration (and where): 6 minutes 23 seconds (southeast of Luxor, Egypt)

If you only travel long-haul to experience ONE total solar eclipse, make it this one. At a whopping 6 minutes 23 seconds totality—unrivalled on land since 1991 and not possible to see again until a similar eclipse in the year 2114 that passes over the Taj Mahal, India —the statistics alone make this irresistible.

Now add Egypt’s “Valley of the Kings.” Oh, and a Star Wars film set in Tunisia. It could also be called the “weather-proof eclipse”: North Africa will offer as surefire a clear sky as it’s possible to get, though eclipse-chasers do need to be aware of the summer heat, which in North Africa in August can reach 41°C/106°F at midday. Fly to Luxor, form a queue outside the Temple of Hatshepsut.

The iconic Sydney Opera House and Harbour Bridge at sunset on May 08, 2020 in Sydney, Australia. … [+] (Photo by James D. Morgan/Getty Images)

Where: Australia and New Zealand. Here’s a map.

Disclaimer: I am editor of WhenIsTheNextEclipse.com