The Answer To A Dinosaur Dilemma Was Hidden Under The Stairs 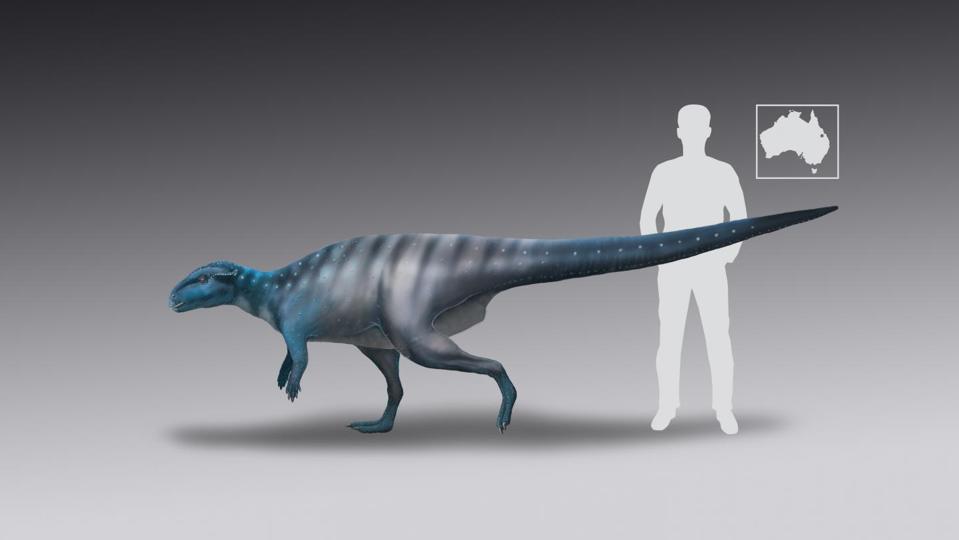 This artist’s reconstruction suggests what the dinosaur may have looked like.

Some families have a few skeletons in their closet, but 3 sisters in Queensland, Australia had dinosaur footprints – and the solution to a decades-old mystery surrounding dinosaur tracks on the ceiling of a cave near the town of Mount Morgan.

The fact that the tracks were on the cave’s ceiling is actually the least mysterious thing about them. 199 million years ago during the early Jurassic Period, the layers of sandstone and siltstone that make up Mount Morgan were the shores of a lake, where several species of dinosaurs foraged and hunted. Dinosaur tracks in the silty mud of the beach quickly filled with sand, and over millions of years, the mud turned to shale while the sand turned to sandstone. The shale eroded more easily, leaving behind the sandstone as natural casts of the long-dead dinosaurs’ feet. If you could stand in the cave today, you’d be looking up from below at their rocky soles.

In the late 1800s and early 1900s, an Australian gold mining company dug layers of siltstone out of the ground to make bricks for its smelting furnaces, leaving behind the so-called “fireclay caverns.” Few of them would be familiar even to die-hard dinosaur fans: Anomoepus, Eubrontes, Grallator, and Skartopus are taxa known only by their tracks, so far. They may actually have been made by some of the same animals whose fossils now reside in museums around the world, but paleontologists don’t yet have enough evidence to make the connection, so they get their own names for now, along with a lingering air of intrigue.

But when paleontologists and geologists climbed ladders and scaffolds to study the tracks starting in the 1950s, a few of the tracks were even more enigmatic.

Ironically, the actual ancestors of modern birds weren’t ornithischians. Today’s birds are theropods, dinosaurs who belonged to an order called the saurischians, whose hips once looked a lot like modern lizards’ hips. Over the last 200 million years, some theropods’ hips evolved to look like ornithischian hips once had – like birds, in other words. Theropods also walk on their hind legs; picture a velociraptor or a pigeon, and you’ve got the idea.

“Earlier examinations of the ceiling footprints suggest some very curious dinosaur behavior: that a carnivorous theropod walked on all 4 legs,” said University of Queensland paleontologist Anthony Romilio in a recent press release. “You don’t assume T. rex used its arms to walk, and we didn’t expect one of its earlier predatory relatives of 200 million years ago did either.”

The root of the mystery is one of the tracks in particular, labelled A2; the other 4 tracks in the set were all clearly hind feet with 3 toes each. But researchers couldn’t agree on whether the track had been left by a forefoot (or “hand”) or a hindfoot – or even how many toes it had. And those questions were key to figuring out what happened on the Australian lakefront 199 million years ago.

A2 was much smaller than the other tracks, so if A2 was also a hind foot, then the five tracks were made by at least 2 dinosaurs walking on their hind legs. But if A2 was a forefoot, then the tracks could have been made by a dinosaur walking on all fours – and if that forefoot had 4 toes, then it would be the only known evidence of a theropod walking on 4 legs. Some paleontologists suggested that A2 might even be a handprint from a dinosaur called Megalosaurus: a 700-950 kilogram (1540-3000 pound) carnivore, about half the size of its later cousin Tyrannosaurus rex but still formidable. 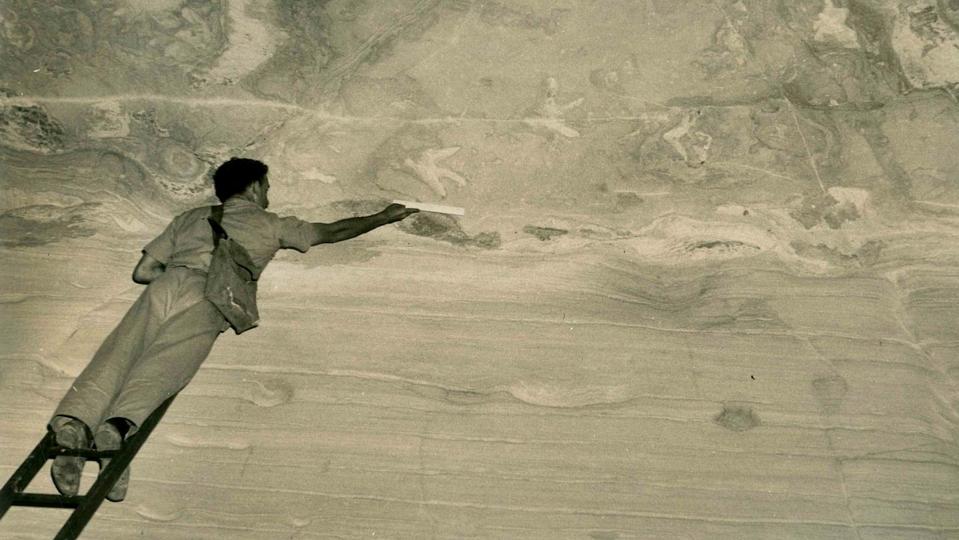 Ross Staines needed a ladder to reach the tracks on the cave ceiling, 4.5 meters above the floor.

It sounds like an easy problem to solve: just look at the track, count the toes, and measure the overall shape of the foot. If the track had 5 toes, it probably came from an ornithopod forefoot; 4 toes probably meant a rare print from a theropod forefoot; and 3 toes could have been a hind foot from either type of dinosaur. So how did track A2 turn into a mystery that took half a century to solve?

Although most theropod dinosaurs during the early Jurassic Period had 4 fingers on their front limbs, the fourth was vestigial, with just one phalanx (it might help to look at your own fingers; each of the bones between your knuckles is a phalanx). The tiny 4th finger, if it existed, might have been hard to spot in a print. And paleontologists can’t just go look at the track, because authorities in Queensland closed the cave system in 2011, after erosion made it unsafe to enter. Meanwhile, the published photos and drawings of the tracks from the 1950s were printed so badly that you can’t even see track A2, let alone tell if it had 3 toes or 4, or where it lies in relation to the other 4 tracks.

So the mystery lingered, long after the caves had been sealed away, until a Queensland dentist led Romilio to the evidence that cracked the case.

“I’m sure Anthony [Romilio] didn’t believe me until I mentioned my father’s name – Ross Staines,” said dentist Roslyn Dick in a recent press release. She introduced Romilio to her sisters, Heather Skinner and Jackie Millar, who between them had all of Staines’ original high-resolution photos and notes, tucked away in a closet under Skinner’s stairs. “We even have his dinosaur footprint plaster cast stored under my sister’s Harry Potter cupboard in Sydney,” added Dick.

The photographs and the cast gave Romilio and his colleagues the chance to count track A2’s toes properly for the first time, measure the dimensions of all 5 tracks, and look at whether A2 seemed to belong to the same dinosaur as the other 4 tracks. The answer to the decades-long mystery? Track A2 had 3 toes. It was the hind foot of a second dinosaur, much smaller than the one responsible for the other 4 tracks.

“Rather than one dinosaur walking on 4 legs, it seems as though we got 2 dinosaurs for the price of one – both plant eaters that walked bipedally along the shore of an ancient lake,” said Romilio in a recent press release. The 4 larger tracks belonged to a medium-sized animal, about 0.89 meters to 0.95 meters (2.92 feet to 3.12 feet) tall at the hips, walking at about 4.1 kilometers per hour (2.5 miles per hour). But little track A2 belonged to an animal about 0.48 meters (1.57 feet) tall at the hip; with only one footprint, paleontologists couldn’t estimate its speed.

And both dinosaurs were probably ornithopods, because their feet were wide, with splayed toes; theropods usually had longer, narrower feet with the toes set closer together. In fact, after a closer look at Staines’ photos, notes, and cast, Romilio says both dinosaurs were probably different species of Anomoepus – the same taxon, known only from footprints, that left behind about 68% of the tracks in the Mount Morgan caves.

When Staines published his report on the five then-unidentified tracks in the “fireclay cavern,” he proposed that the smallest track, A2, had just 3 toes and suggested a small bipedal dinosaur walking alongside the path of a much larger relative. More than 60 years later, his 3 daughters co-authored (with Romilio) a paper in the journal Historical Biology, demonstrating that Staines’ hypothesis was probably correct. It’s enough to make you wonder what’s hidden in your own family’s closet.

Expenses And Turnover Can Have A Negative Effect On Performance