Having spent most of my adult life at think tanks (and helping create many as well), I always look forward to the release of the Global Go To Think Tank Index Report, prepared by James G. McGann, director of the Lauder Institute’s of the Think Tanks and Civil Societies Program at the University of Pennsylvania. Jim McGann must be the only person I know who devotes even more time to think tanks than I do. Must be a question of focus. The 2019 index was released last week, and the Middle East Institute and the Center for Strategic and International Studies (CSIS) hosted morning events to discuss its findings and some of the challenges think tanks face. I attended both events and here offer my reactions. As usual, I focus only on the sector I know best; that is, organizations favorable to the free economy. 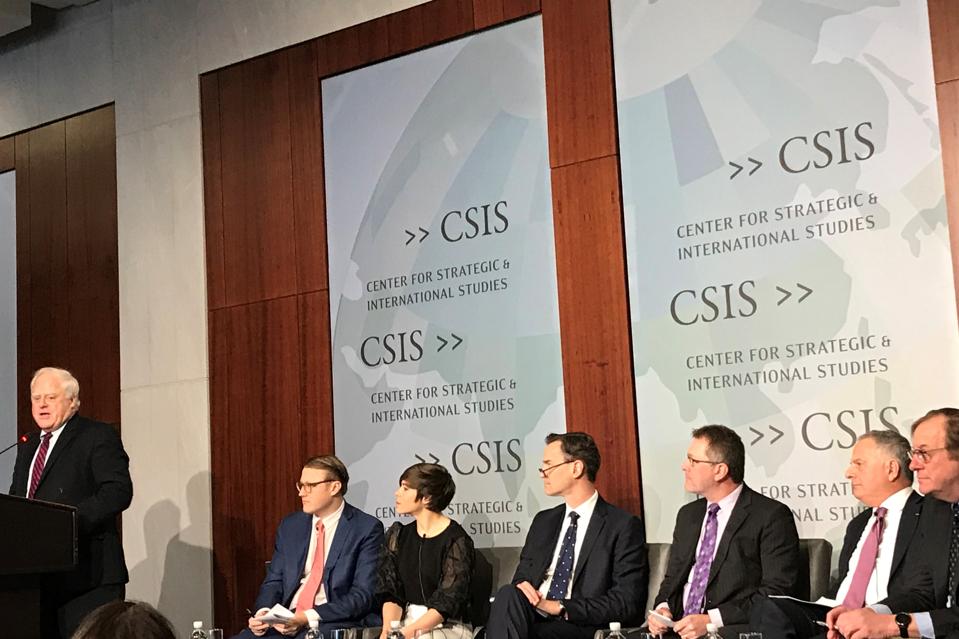 The Heritage Foundation again had more nominations than any other free-market think tank, appearing in 26 categories. The Brookings Institution was again the highest-ranked group overall. Not counting its foreign affiliates, Brookings received 34 nominations. Heritage was ranked first among all think tanks, free-market or otherwise, in its impact on public policy. This is the third year in a row that it earned this leading status.

Canada’s Fraser Institute and the Cato Institute are closed behind with 23 and 21 nominations respectively. Fraser’s budget continues to be a fraction (15%) of that of Heritage, and one-third that of Cato. Fraser ranked first overall in Canada and topped all other free-market-oriented institutes in the category of domestic health-policy studies, as well as in social policy.

There are more than 8,200 think tanks in the TTCSP database. This year’s results measured surveys completed either in full or partially by 3,974 “voters” (not all rank think tanks in all categories). More than 45,000 people were invited to complete the survey. Invitations and votes do not follow any specific pattern, however; only 97 were invited from Canada and Mexico, while 4,418 were invited from Africa.

More than 50 categories rank think tanks by region, type (independent or affiliated with governments, corporations, political parties or universities) and focus (health, environment, etc.). Most years McGann adds a new category. This year his team compiled a list of think tanks working on the implications of artificial intelligence (AI) for think tanks, governance and society. Only three pro-free-market groups appeared on the list: Heritage, the Hudson Institute and Instituto Millenium in Brazil. Some functions of think tanks, such as key aspects of networking, can be greatly aided by AI.

No ranking is perfect and answering the question about which think tanks are the best will always be open to discussion. A weakness of the index is that voters (including me) may show bias in favor of think tanks working in very difficult circumstances, such as CEDICE Libertad in Venezuela. Another weakness is the inability to identify institutes that are about to disappear or change their focus.

One example of this inability is China’s Unirule Institute, which closed its doors in August 2019, before the ranking process started. It still received 11 nominations. Founded in 1993 by a small group of scholars that included Professor Mao Yushi and Professor Fan Gang, the think tank had to close due to governmental pressure. Mao Yushi, whom I first met in 1995, won the 2012 Milton Friedman Prize from the Cato Institute. Unirule’s closing is a great loss for independent policy analysis in China.

Also impacted by political changes is the Spanish Foundation for Analysis and Social Studies (FAES) which, until three years ago, was affiliated with the Popular Party (PP). FAES had lost favor with the party leaders who were reluctant to push for a more conservative and free-market agenda. The Popular Party is now headed by Pablo Casado Blanco, who sympathizes with FAES’s original and current mission. FAES was, in fact, founded by Casado’s mentor, former Prime Minister José María Aznar. In all likelihood, FAES will continue as an independent organization, with more limited programs, and the Popular Party will create a new think tank more focused on political needs.

Continuing with politically affiliated think tanks, the Konrad Adenauer Foundation (KAS) again had the most nominations with 20. Germany was the pioneer in creating taxpayer-funded political party foundation; KAS was founded in 1955. Each party foundation receives funds from the government in proportion to the party’s votes. KAS is affiliated with the Christian Democratic Union, which, as the leading party in government, receives more funds than the others. It has less focus on free-markets than the Friedrich Naumann Foundation (FNS, affiliated with the Free Democratic Party) and the smaller Hanns Seidel Foundation (HSS, affiliated with the Christian Social Union). All of these groups work globally but with the constraints of the European context, which is generally more statist than the United States. FNS and HSS have less diverse electoral bases than KAS, which has to balance the interests of many more regions. Such party think tanks can’t have agendas at odds with their parties’ platforms. On climate change, for example, their positions put them closer to what would be considered the left in the United States.

Overall, this year’s think tank rankings are similar to last year’s (see Table 1). Heritage, Fraser and Cato have been the top three for a long time. American Enterprise Institute almost caught up with them in nominations (20) and farther south, in Chile, Libertad y Desarrollo think-tank received 18. 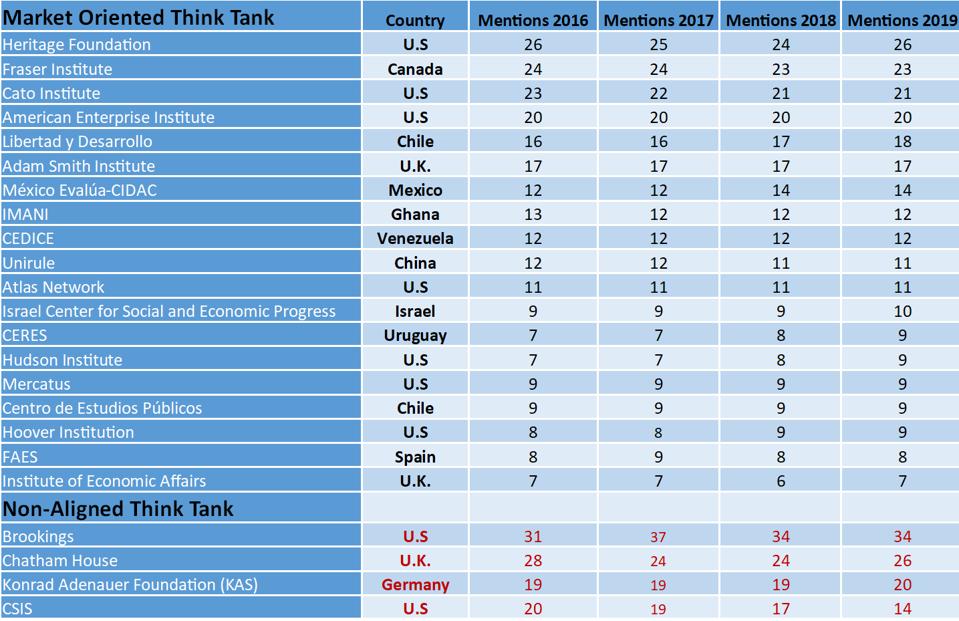 In Table 2, I include the top market-oriented think tanks in 20 categories. There are another 30 categories, which can be easily accessed online. Last year’s index was 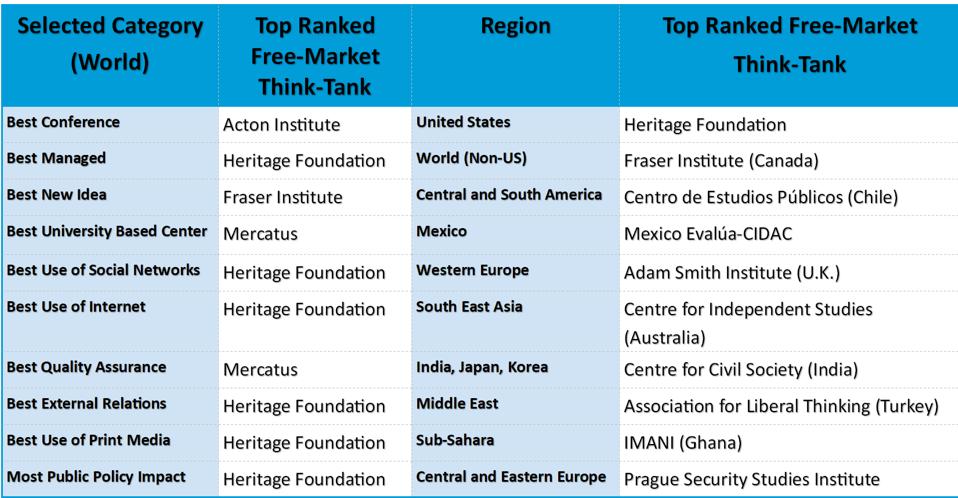 I welcome the consistent good reputation of Mexico Evalúa-CIDAC, whose independent work is very much needed in a Mexico led by a popular leader whose often-contradictory policies have led to economic stagnation. As I mentioned last year, Uruguay’s Centro de Estudios de la Realidad Económica y Social (CERES), faces a challenge since its leader, economist Ernesto Talvi, ran for president. He came up short, but since his party formed an alliance with the winner, President elect Luis Lacalle Pou, Talvi has agreed to join the administration as foreign minister.

There are many relevant think tanks that do not appear in the index but should. A certain amount of previous name recognition among the selected voters is necessary. For instance, the Institute for Political Studies at the Catholic University in Portugal – one of my favorite think tanks – still does not appear despite its outstanding record in influence, placements and scholarly authority. One receiving more notice is the Instituto Millenium in Brazil, which counts as members of its “Founders Board” the current minister of economics, Paulo Guedes, and his deputy, Marcos Troyjo. Guedes and Troyjo recently attended a special meeting of the Mont Pelerin Society (MPS) hosted by the Hoover Institution. MPS’s meeting placed second, behind Acton Institute, among free-society groups in the “Best Conferences” category.

The Center for Strategic and International Studies (CSIS) again received many votes (31) and has numerous researchers who favor a free economy, but CSIS prefers to be seen as non-aligned and compete with the Brookings of this world.

Last year I mentioned a survey presented two years ago during a think tank summit that offered a less-than-flattering assessment of the think tank world. In that survey, over half of the respondents said they had little idea what think tanks do and so could not answer whether they deserve to be trusted. Flint, the group who did the study, has now posted a revised version of it online. I do not agree with all their editorial comments, and their study requires a lengthier treatment, but I recommend that those who work for and support think tanks ponder the questions the study raises, including: Are think tanks for sale? Are they a self-serving group?

During the launching of the index at CSIS, McGann reiterated what others said in private. Specifically, the call for “diversity” usually means employing people who look different and have different origins and backgrounds, but who think very much alike. It will be hard to think outside the bubble of Embassy Row think tanks if they do not become more ideologically open and have researchers who spend time away from the Washington D.C. area.

University-based think tanks continue to be the main competitors of independent groups. Among those which are market-oriented, the Hoover Institution at Stanford University and Mercatus at George Mason University are the current leaders. Hoover recently named Condoleezza Rice as its new director and will likely increase its influence in Washington and the world. Mercatus, with a budget that is similar to that of Cato, and with important support from Koch, will likely remain focused on economic policy and continue to promote a libertarian agenda.

One last word. This is another year with a U.S. presidential election. How think tanks position themselves will have an important impact in future rankings. For instance, the Heritage Foundation, with hundreds of thousands of members around the country, has better feedback on what is happening in the nation as a whole than smaller groups. Heritage’s programs and positioning with Congress and the administration helped them earn first place in U.S. public policy influence. But there will be life after Trump, in 2021 or 2025, and the better the non-political work of think tanks is, the more valuable their long-term contributions to a free society and the preservation of a free economy.

In addition to his position at the Acton Institute, the author is trustee of the Fraser Institute and CEDICE Libertad U.S. Foundation

How The Tech Industry Can Shift From Inclusion To Belonging

How Limeade, The Seattle-Based Employee Experience Company, Is...