Breaking
John Kerry As Presidential Climate Envoy: Virtue Signaling...
Increased Risk Of Chronic Conditions Associated With Early...
Top ETFs This Week As Dow Ends Day...
As Biden Admin Eyes Canceling Student Loans, Taxpayers...
How Social Media Is Helping Cryptocurrency Flourish
Here’s What You Need To Know About AstraZeneca’s...
Mini Gifts: What To Get For Your Colleagues...
Report: Biden Picks Janet Yellen For Treasury Secretary
Policy Priorities
How To Poise Your Business For Success (And...
Eight Key Steps To Landing Your Product In...
Brands That Are Redefining Black Friday
How Much Room Is There For E-Kick Scooter...
Why We Must Update The Law For The...
The Tax Rules For Home Businesses And Working...
How To Use The ‘E.R.I.C.’ Framework To Tackle...
Home Technology The Best Games Of 2019 (That You Might Have Overlooked)
Technology 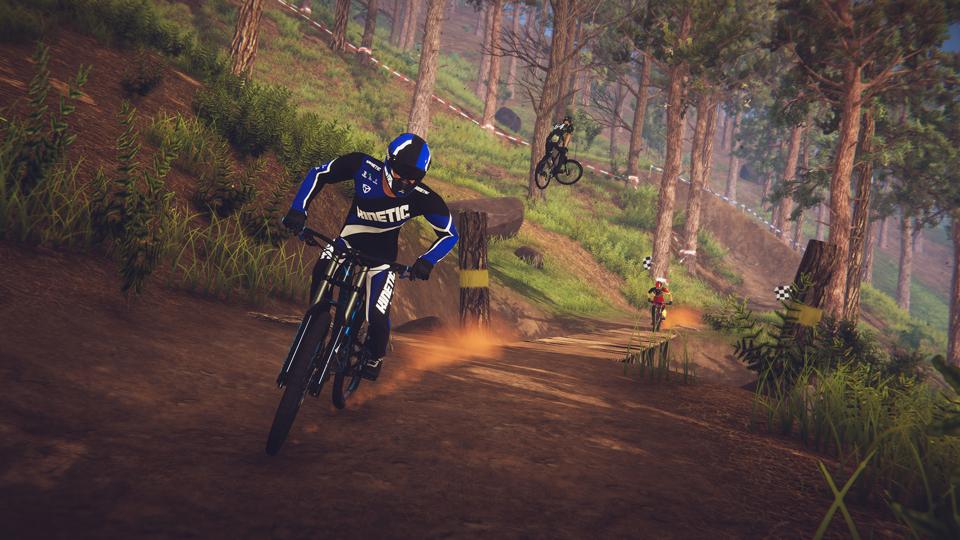 It might not be the most classic year for gaming in recent memory, but 2019 has thrown some stellar releases our way. Blockbuster titles like Resident Evil 2 and Sekiro: Shadows Die Twice, as well as lower-budget masterpieces such as Disco Elysium and Untitled Goose Game, are already rightly taking their places on dozens of end-of-year lists.

But there are so many games over the last 12 months which, while excellent, have been overlooked due to these headline-makers. So, rather than giving you the thousandth list of 2019’s best games, here’s a list of those releases that might have passed you by. They may not be perfect, but between them, you could get hundreds of hours of fun.

Mixing elements of FTL with the excellent cult mobile game Out There, Void Bastards certainly shows its developers’ love for BioShock and System Shock 2, which inspired this release. Centring on a surprisingly beautiful, lo-fi FPS mechanic, it’s a hilarious exercise in bureaucracy, both in the overarching storyline as well as the resource gathering and management needed to succeed in this odd jaunt across space. 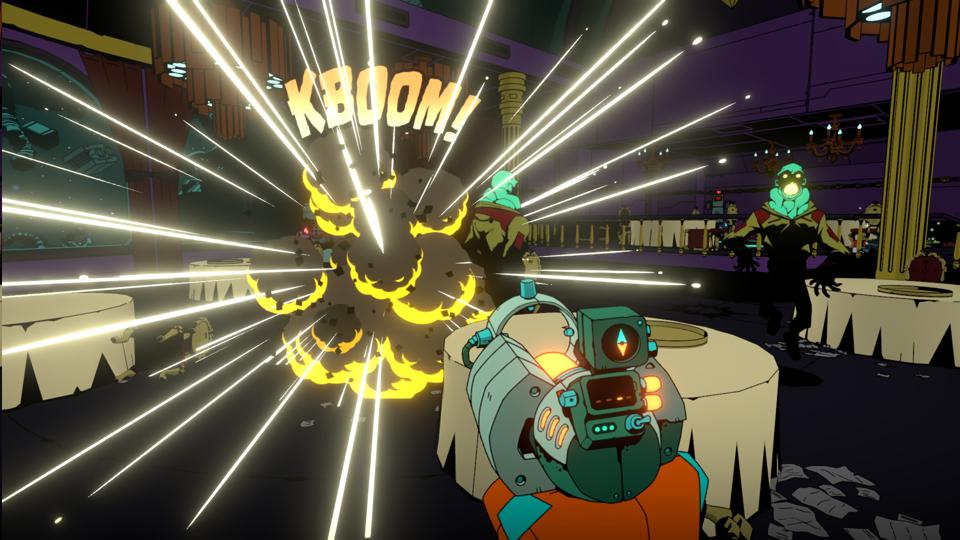 Throughout your trip, you’ll push yourself to the absolute limit, whether you’re low on ammo, health or fuel–sometimes, all three–while its genuinely scary atmosphere, in tandem with its graphic novel-esque visuals, can intimidate with ease. It’s definitely up there for most unique game of 2019, and if you’ve got Xbox Game Pass, it’s currently available on the service, so there’s no excuse not to try it while you can.

In the first couple of hours of WRC 8, you might hate it. But after some adjustments and a little bit of patience, it soon becomes an incredibly engaging rally game that finally takes the fight to Codemasters and its once-dominant DiRT Rally series. 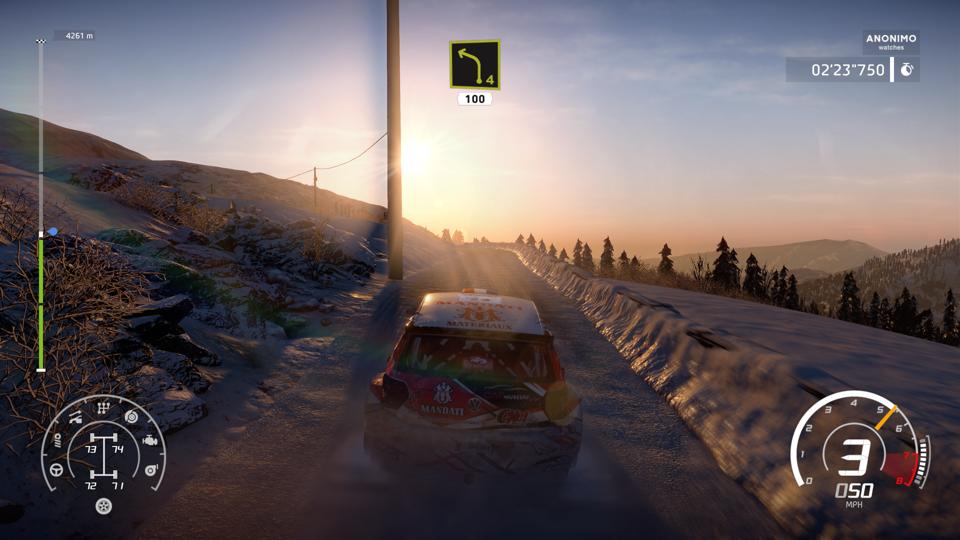 As I said in my review of the game in September, WRC 8 is not without some annoying faults, but it’s a game that lets you appreciate your own limitations as a sim player. Unlike other rally games in the last four or five years–including its own prequels–it caters to all abilities, is enjoyable with or without a racing wheel, looks fantastic and delivers some incredible, adrenaline-fuelled highs.

Overlooked in part due to its late 2019 release as well as the fact this fourth Shovel Knight instalment dropped a full five years after the original, King of Cards proves that great ideas just don’t age. This spin-off of the glorious 2D platformer focuses on the genuinely brilliant King Knight, while also including Joustus–a card game with a hint of Final Fantasy VIII’s Triple Triad. 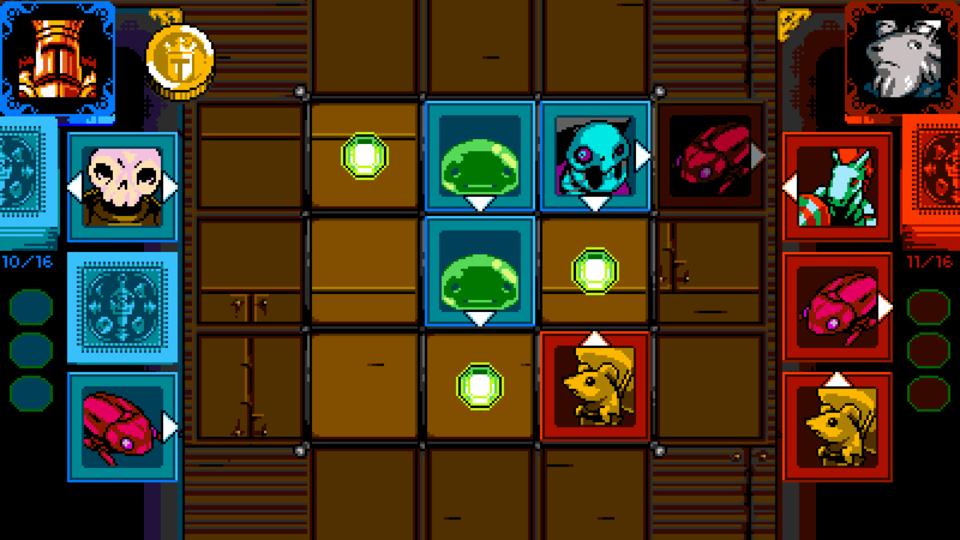 As far as the series goes, the platforming sections may be the best that Yacht Club Games has ever mustered–King Knight’s spectacular bouncing spin attack is a game of skill but devastatingly effective when used correctly, while both enemies and your surroundings make each new section a challenging delight. But Joustus is the real star: a game which, like Gwent, deserves a dedicated release.

Developers at RageSquid pulled one of the biggest surprises out of the bag this year when they released Descenders which, much like Void Bastards, debuted upon release on Xbox Game Pass. While it’s decidedly more rough around the edges, this extreme downhill freeriding experience is endlessly playable, not least because it’s procedurally generated.

As you progress though its levels and worlds, you chase objectives that give you more lives as well as the ability to shape your worlds or rider in favor of your way of playing. Once you die the final time, it’s back to the start. As one of the most bare-bones games of 2019, it’s also one of the easiest to pick up and play for short bursts. What’s more, it’s an absolute bargain if you want to buy it outright.

Speaking of simple but replayable experiences, Demon’s Tilt quietly released at the start of the year, but gained a bit more exposure this month with its inclusion on Xbox Game Pass. This is a pinball experience like no other: a trio of stacked, occultish tables that endlessly morph in line with your gameplay. 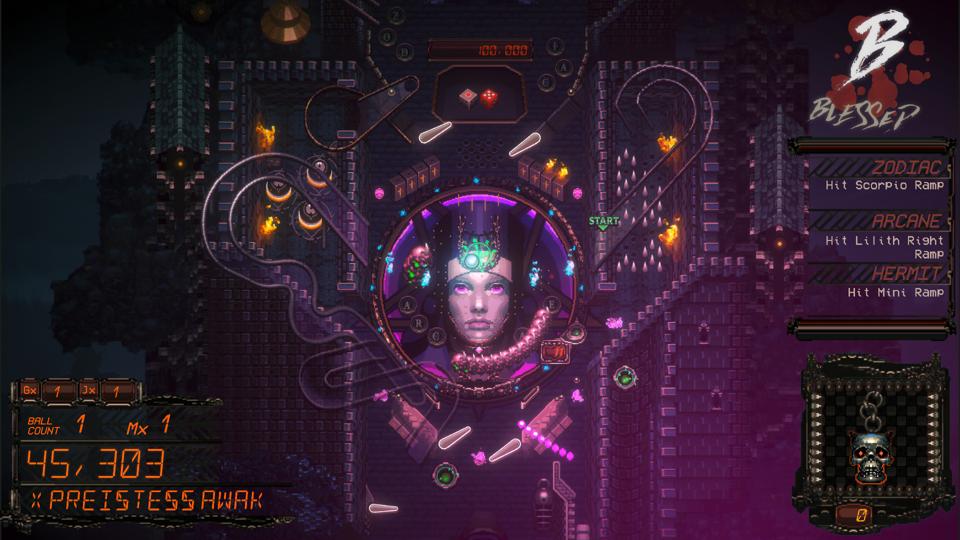 ‘Demon’s Tilt’ is pinball at its finest.

The sheer detail of the table is one thing, but this combines with bullet hell elements as you take on various bosses. It’s a remarkably forgiving experience through its standard mode, but pinball fans will find plenty to love through the accuracy and timing that Demon’s Tilt often demands for success. There’s only one table so far, but more are scheduled for the future, so there’s plenty more value to be had from this in the coming months.

As another game I reviewed earlier this year–and my first introduction to the Epic Store–What the Golf? is by far the funniest title of 2019. Its developers at Triband happily claimed they “knew nothing about golf,” and created this title “for people who hate golf.” That indifference to the sport doesn’t reflect on its quality, though; it’s a lovingly curated, diverse and keenly satirical game. 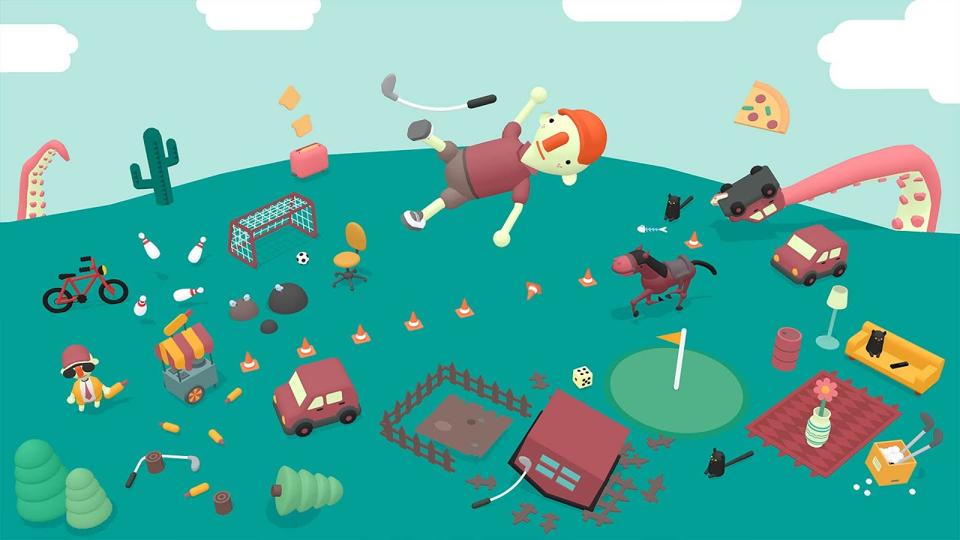 Within the first hour, you go from a simple game of putt-putt to firing rocket-powered TVs at trees, using explosive soccer balls to dispense with annoying children, and “ruining a party” by throwing cows, sheep and dogs from a playground swing at hotdog stands. Under all this madness are real skill-based mechanics that make What the Golf? endlessly replayable, whether it’s for hours or just a few quick levels.

Ever since FlatOut 2 was released in 2006, there hasn’t been a destruction derby game that’s held a candle to it–until this year, courtesy of Wreckfest, which finally landed on console after years of PC exclusivity. It’s not much of a surprise; Finnish developers Bugbear Entertainment were behind both games. 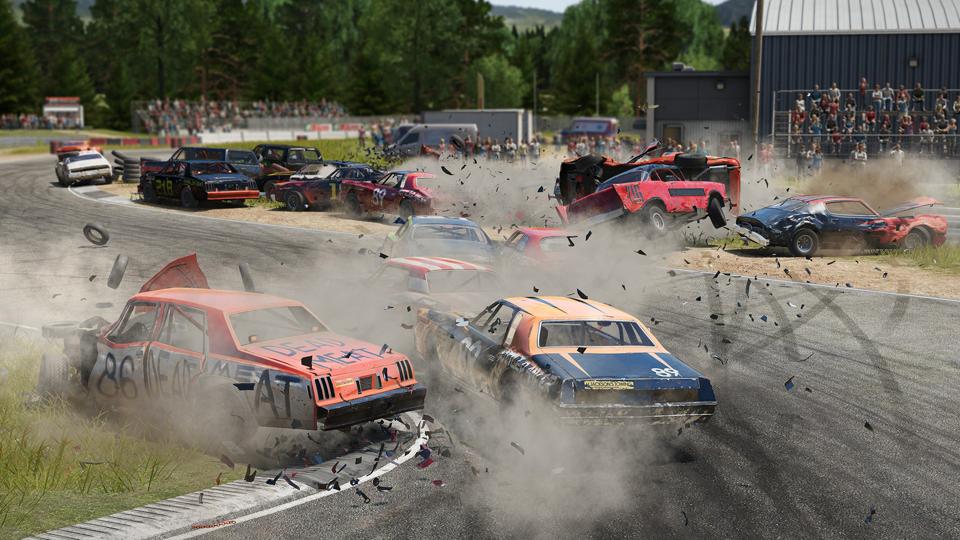 ‘Wreckfest’ is the best destruction derby racing game of the decade.

After multiple delays, Wreckfest was still a little broken upon release, filled with glitches and as prone to as many console crashes as on-screen car crashes. However, these problems were quickly fixed with a patch that resulted in one of the most polished, beautiful and altogether chaotic games of the year, and one you’ll get for well under $30 if you look in the right places.

Trine 4 is not something you buy for the story, but as I explained in my review of the game earlier this year, it’s got so much going for it, you can basically ignore the narrative entirely. Amadeus the Wizard, Pontius the Knight and Zoya the Thief are used so cleverly in this stunning and puzzling 2D platformer that even the best storyline would’ve just been a cherry on top. 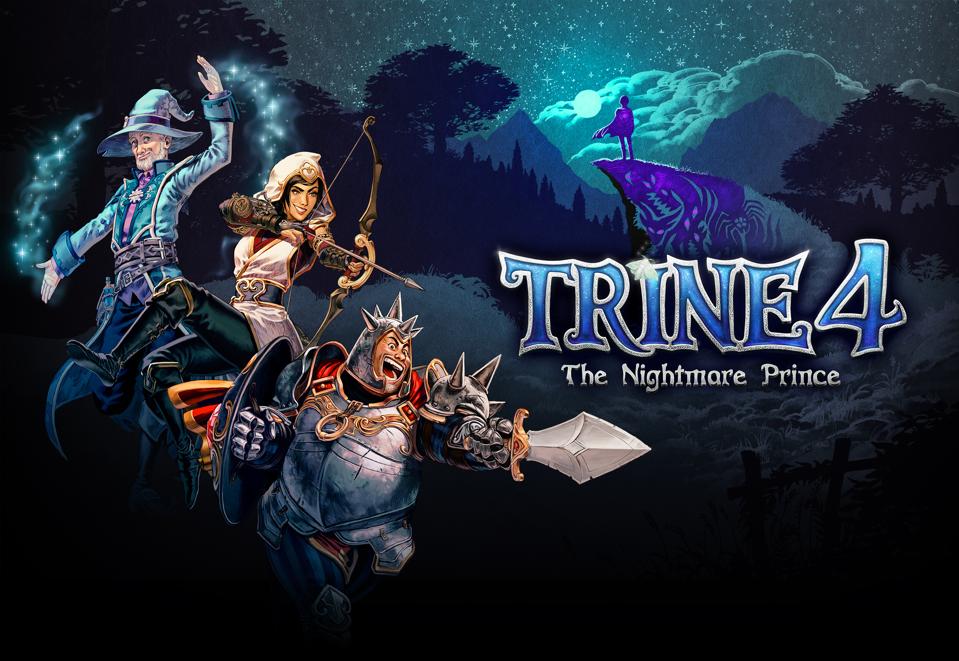 ‘Trine 4 – The Nightmare Prince’ was a real surprise.

Even if you’ve never played any of its prequels, Trine 4 is a family-friendly, wholesome romp that has the ability to confound even the most dedicated fans with its clever problems. Of all the games on this list, it might’ve been the biggest surprise package of them all.