Breaking
Renewables And Energy Storage Are Surging In Red...
Bitcoin’s Richest Are Selling, So Why Is The...
Apple’s iPhone 12 Will Cause Serious Problems For...
Rock Royalties – How A European Startup Is...
4 Differences Between Creative and Marketing Agencies
A Meeting Is A Gathering: The Most Common...
IRS Tax Extension To Jan. 15 For California...
Senate GOP Pushes Through Democratic Filibuster To Advance...
How These Successful Entrepreneurs Learned To Adapt And...
Six Ways Tax Rates Go Up For Retirees
How ‘Mario Kart Live: Home Circuit’ Straddles The...
6 Tools To Bring Your Virtual Conferences To...
COVID-19 And The Future Of Aging: Prospects For...
Harman’s New Citation MutiBeam 700 Is A Feature-Packed...
A Startup Raises $11 Million Using Zoom, A...
Is Your Business Stagnant? It Might Be Time...
Home Business The Best Of Broadway, Gallery Hopping, And Other Highlights From New York Fashion Week Fall 2020
Business

The Best Of Broadway, Gallery Hopping, And Other Highlights From New York Fashion Week Fall 2020 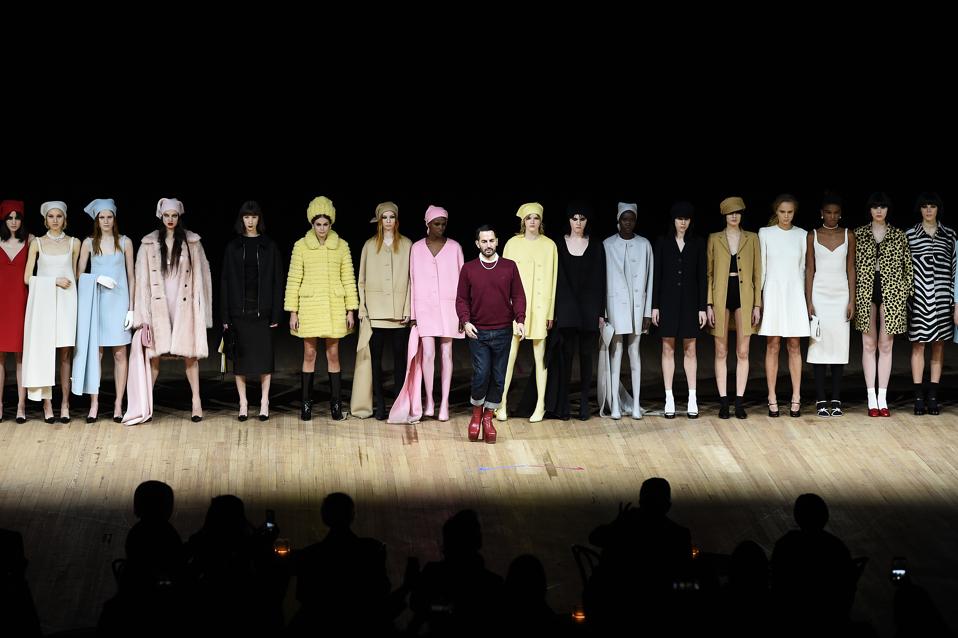 For the past several years, New York Fashion Week has been a figurative circus—and in some instances, a literal one. But for the Fall 2020 season, the atmosphere was far more tempered: invitation lists were smaller, celebrity attendance was at a minimum, and after-parties were scant. Most brands decidedly went back to basics, presenting their collections to select buyers, editors, and the cream-of-the-crop social media influencers. They eschewed the media spectacle outside their venues, instead concentrating on putting shows that pushed sartorial boundaries. Here were the five best.

The Marc Jacobs Fall 2020 ready-to-wear presentation was no mere fashion show. Nay, it was an event that celebrated the best of Broadway: a dash of Sweet Charity, a dollop of Cabaret, a sprinkling of Urinetown and Annie, a dollop of A Chorus Line, and more. And the clothes certainly reflected this credo. There was a red babydoll that called to mind the orphan who would become a Warbucks, a series of pastel lingerie that would fit perfectly into a modern-day Kit Kat Klub, and looks that Evita Perón would covet for her Rainbow Tour.

Added into the mix were nearly identical ensembles worn by the likes of Jacqueline Kennedy, Rosemary Woodhouse, Edie Sedgwick, Madeline, and other ladies (both real and fictitious) who are marked for having an unmistakable, indelible style. Songstress Miley Cyrus also walked down the catwalk wide-eyed, furthering the sense of individualism that permeated throughout the collection.

The eponymous designer, who is one of the last major draws at New York Fashion Week, seemingly knows his standing in the industry. With so many labels decamping to Europe or showing off the prescribed fashion week calendar, Jacobs proved that there is still no place like the Big Apple. 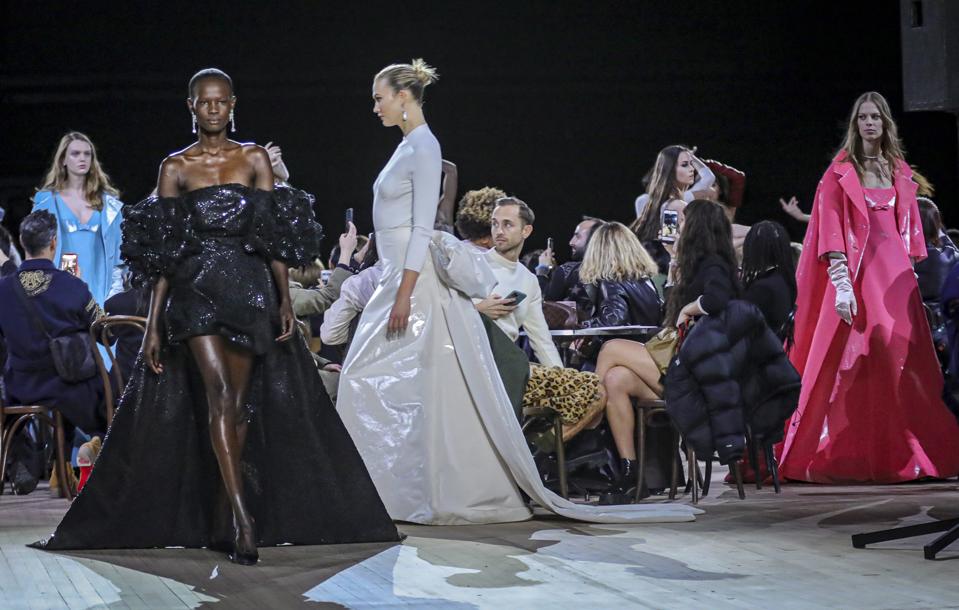 Art and fashion are two industries that often join forces—and Tory Burch certainly enforced this sentiment with her Fall 2020 runway show. Taking over multiple galleries at Sotheby’s in New York, the namesake designer enlisted the talents of Francesca DiMattio, whose large, beautifully distorted ceramic sculptures lined the space, mirroring the assortment of ensembles worn by models who walked with verve from one room to the next.

Hard and soft elements were carefully considered, including dainty floral prints on structured separates that were paired with embroidered knee-high boots, flowing frocks that were toughened with bold leather jackets, and sleeveless dresses in porcelain-style patterns that were masterfully broken up with glistening black adornments that cut across the center. The overall look for each piece imparted a prim vibe that is part and parcel with Burch’s brand. Still, there was always an added layer of subversiveness, a pronounced, perhaps unexpected detail that truly made a walking work of art. 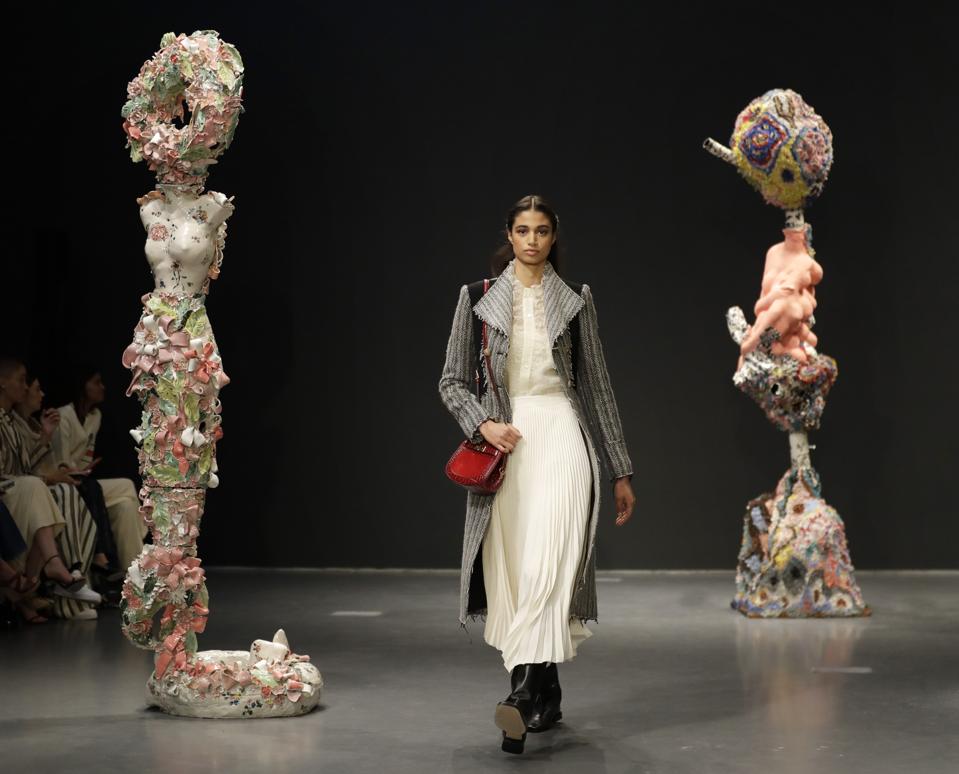 There were a row of plaster columns that lined the catwalk at Ulla Johnson’s Fall 2020 show—one of which toppled over as guests meandered in. The real bang, however, happened as soon as the first model graced the runway, wearing an embossed emerald green top with mutton sleeves over leather trousers—and was accessorized heels that featured chain detailing, sculptural jewelry, and a framed chartreuse handbag. The rest of the collection followed the sense of dynamism.

There were floral printed and patchwork dresses that were cinched with flesh-colored obi belts, slick gem-tone coats that would appeal to magpies, and a number of frocks with tiered skirts that followed an elegant, nomadic sensibility. Indeed, the lineup was strong, directional, and, unlike that one column, completely unwavering in its ability to make a statement that stringent fashion followers covet. 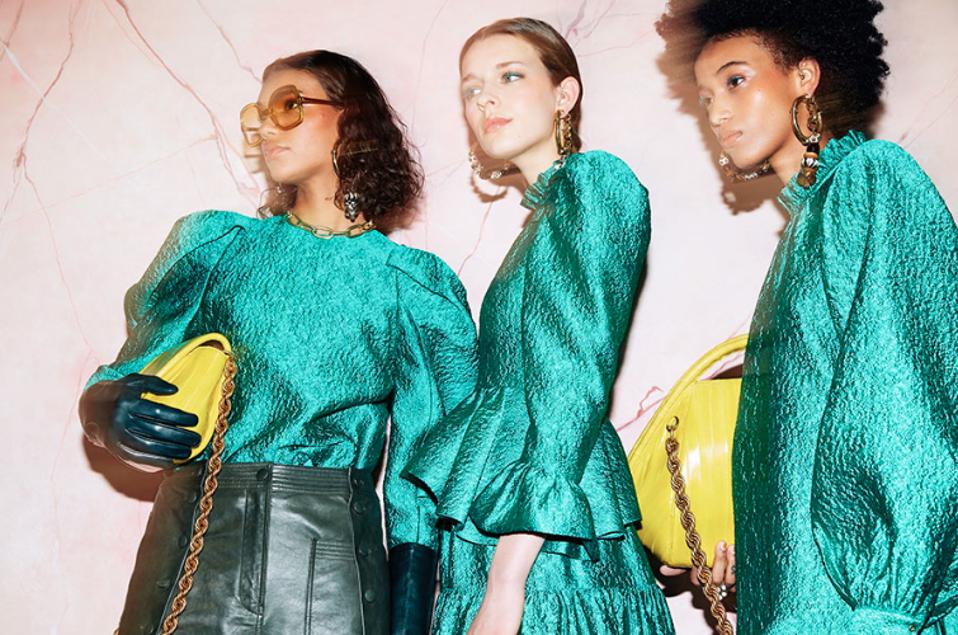 Traveling well is the hallmark of Lonchamp. The Parisian-based label has long been producing apparel and accessories that are perfect for wanderlusters who value pieces that are as durable as they are de rigueur—particularly the iconic Le Pliage bag. They are also cultural arbiters of art and architecture who want their clothes to reflect their discerning tastes. Creative director certainly understands this consumer, and for her Fall 2020 collection, she offered up pieces that keep to this bourgeois mindset.

The rich colors of John Chamberlain and bold gestures of Josef Albers were adopted onto crochet dresses, Intarsia jumpers, and separates that were equal parts elegant and edgy—perhaps more so the former. The bags also made a statement, including the aforementioned Le Pliage, the Roseau, and the revived Longchamp 1980. Each come is varying shapes, sizes, materials, but all are perfectly suited for stylish jet-setters. 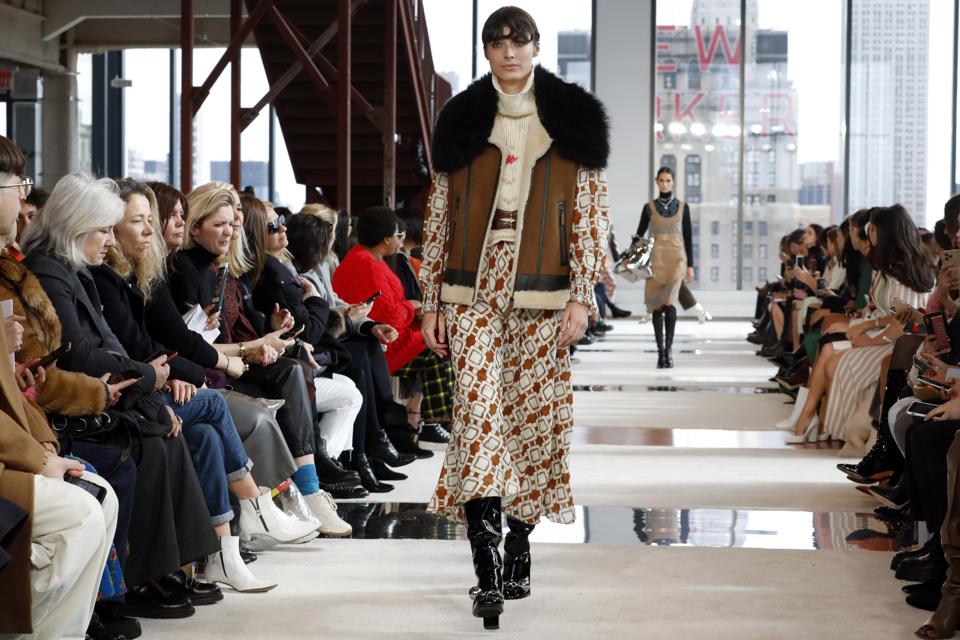