Breaking
Channel Your Impact With a Self-Directed IRA
How To Reach Your Customers This Holiday Season
10 Key Steps That Will Help You Make...
TikTok Will Limit And Label Videos Prematurely Claiming...
How A British Graphic Novel Publisher Is Leading...
Dow Plunges 600 Points On Third Day Of...
According To A New Study, Patients Are Texting,...
How To Keep Your Digital Media Assets Secure
Be Better At Building Your Team
Saying No In Order To Grow
Sherwin-Williams Stock Is Unlikely To Sustain Its Current...
How Successful Entrepreneurs Use The Law Of Attraction
Elon Musk’s Economics 101 Course For Japan
Raoul Pal: Gold Investors “Will Flip To BTC”...
Dating Site Takes On Social Media Dangers Of...
Trump Campaign Website Hacked In Cryptocurrency Scam
Home Business The Bottom Line On The NFL’s First Coaching Casualty: Freddie Wasn’t Ready
Business 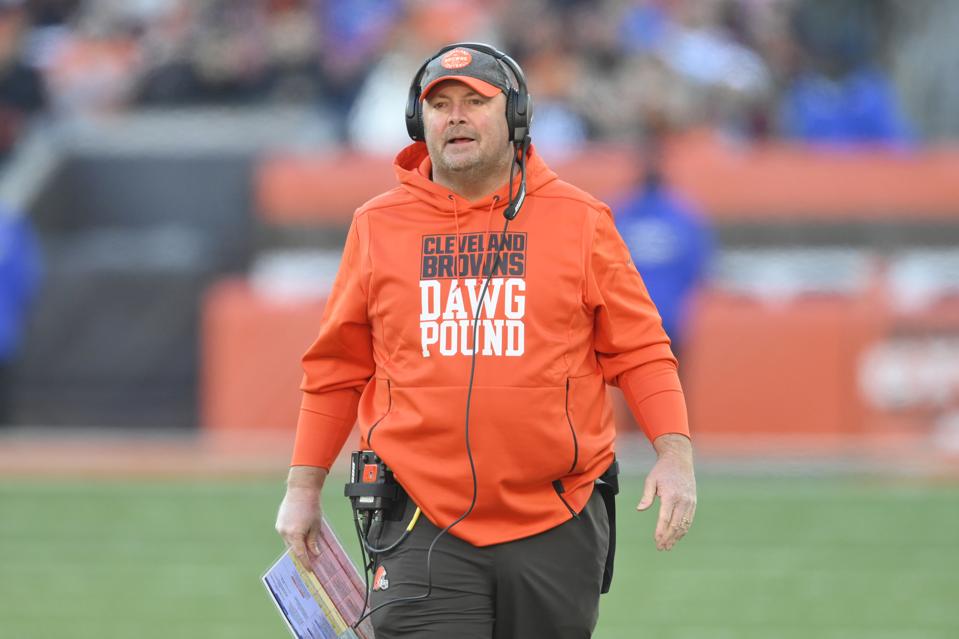 Freddie Kitchens’ career as head coach of the Cleveland Browns is over after one disastrous season. … [+] (AP Photo/David Richard)

In his first game as coach, his star-studded, but out-of-control team committed 18 penalties for 182 yards in a 30-point loss, at home, to Tennessee.

In his last game as coach, Sunday, on a gray and rainy afternoon in Cincinnati, his team lost by 10 points to a team that came into the game with a record of 1-14.

The 14 games in between were no day at the beach, either, so, to the surprise of exactly nobody, The Freddie Kitchens Era in Cleveland is over.

Kitchens, who for most of the 2019 season seemed more like a helpless passenger than the engineer on this runaway train, was fired Sunday evening after 11.5 months as head coach of the Cleveland Browns, who continue to polish their well-earned reputation as a clueless, chaotic, rudderless ship.

“I would like to thank Freddie for his dedication and efforts this past season,” said Browns general manager John Dorsey, in a release issued by the team. “We are disappointed in our results and feel a change is necessary. Freddie is a good man and good football coach. We wish he and his family nothing but the best.”

Kitchens is the sixth head coach fired by the Browns since 2010, the fifth fired in the eight years since owners Jimmy and Dee Haslam bought the team in 2012.

“We thank Freddie for his hard work and commitment to this organization, but did not see the success or opportunities for improvement to move forward with him as our head coach,” said the Haslams, in the release issued by the team. “Our focus is on hiring an exceptional leader for this football team and we will take a comprehensive approach to this process. We are excited about the core players we have to build around and develop and we look forward to bringing in a strong head coach that will put this group of players in the best position to succeed.”

Two of the last four Browns head coaches were fired after one year: Kitchens and Rob Chudzinski in 2013.

Kitchens never made it through one calendar year as head coach. He was named coach on January 9 and was fired on December 29. With no prior head coaching experience at any level, Kitchens, as subsequent events proved, was a poor choice, especially given the makeup of, and expectations for this particular Browns team.

Dorsey executed a rapid and major roster rebuild, including the blockbuster trade last summer for wide receiver Odell Beckham Jr., who joined an already loaded offensive unit. Quarterback Baker Mayfield, the No.1 overall pick in the 2018 Draft, had playmakers everywhere he looked.

That included, two Pro Bowl receivers in Beckham and Jarvis Landry and two Pro Bowl running backs in Nick Chubb and Kareem Hunt. Expectations for the team were soaring when the season began, but it didn’t take long for the balloon to burst.

At no point in the season did the Browns have a winning record. Worse yet, as the season wound down, so, too, did the players’ will to compete. An ugly 38-24 loss in Arizona to the then 3-9-1 Cardinals featured multiple plays in which Browns players seemed to lose interest, a fact not lost on Hunt, who a few days later said not all the players gave 100% in that game.

Two other losses, to Denver and Pittsburgh, came against quarterbacks who were making their first NFL starts. Kitchens’ biggest problem was that the team did not respond to his leadership, and the players didn’t play as though they respected the coach, who seemingly failed to hold them accountable for, among other things, the skyrocketing penalty totals.

There was the infamous brawl against the Steelers that resulted in Browns defensive end Myles Garrett being suspended indefinitely by the NFL. That, in turn, led to Kitchens’ most alarming lapse in judgement, when, on the eve of a return-match with the Steelers two weeks later, he wore a T-shirt that read “Pittsburgh started it.”

The Browns finished the season with three consecutive double-digit losses, and a final record of 6-10, which was even worse than last year (7-8-1).

The search now begins for still another head coach, by a team, and ownership, with a remarkable ability to consistently hire the wrong ones.

This time the Browns might be wise to try something they they’ve almost never done: hire a head coach with a track record of success as an NFL head coach.

Since re-entering the NFL in 1999, eight of the nine coaches hired by the Browns had no prior head coaching experience in the NFL.

There are two such potential candidates who fit that profile and are currently available: former Packers coach Mike McCarthy and former Carolina coach Ron Rivera.

In hindsight, giving Kitchens, a rookie head coach, a roster filled with numerous high-maintenance, big names and big egos was probably not the wisest move, and the multiple sideline arguments between Kitchens and his players did nothing to suggest otherwise.

So it’s back to the drawing board for the Browns, while the epitaph for their latest coaching misfire is obvious: