Breaking
The 5 Biggest Mistakes Companies Make With Chatbots
Weird Market Dynamics: 3 Reasons Ethereum Is Dropping...
Silver Shines, Says Citi, Tipping A 60% Price...
Report: Lawyers Unable To Locate Parents Of 545...
In Need Of A Competitive Edge? Look To...
Think Small: Timely Picks To Capture The Reawakening...
Patient Gets Covid-19 Swab Lodged In Her Lung...
Nine Signs You’re Not Being Effective During Your...
Chromebooks Can Now Run Windows 10 – Find...
Will Biden’s Tax/Benefit Plans Help/Hurt You And The...
This Fashion Brand Turned A Stripe Into A...
On CRM: Salesforce Has Finally Fixed Your CRM...
Shots In The Dark: Why Access To A...
The Case For A Better ROI From Virtual...
What Building Wealth Really Takes In Business
Building A Circular Economy In New York City...
Home Business The British Wind Market Keeps Breaking Its Own Record
Business

The British Wind Market Keeps Breaking Its Own Record 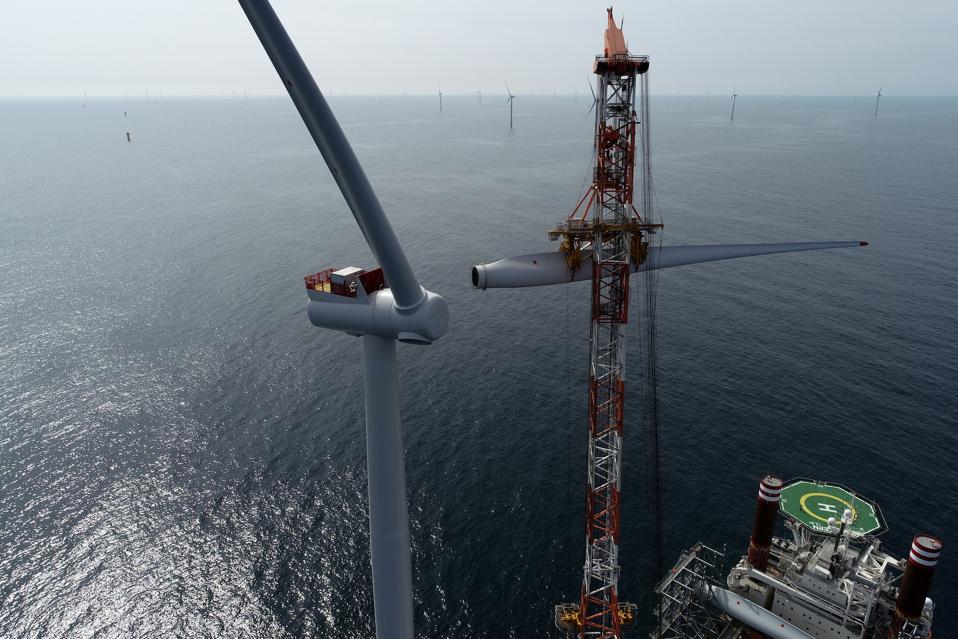 Hornsea 1 will has 174 turbines, each able to power a home for 29 hours with just one spin.

Both the world’s largest offshore wind farm and the world’s largest complex of wind farms will soon appear off the British coasts, showing an unprecedented value of renewable energies. Hornsea One by the Danish energy company Ørsted (formerly DONG Energy) and Dogger Bank’s three projects developed by the Scottish SSE will make Britain the biggest offshore wind market in the world.

At the moment, however, the largest operational offshore wind farm in the world is still Walney Extension off the coast of Cumbria (659MWh).

Once opened later this year, Hornsea One will count 174 turbines and span an area of approximately 407 square kilometres, which is over five times the size of the city of Hull. It will be able to power 1 million UK homes.

Duncan Clark, head of region UK at Ørsted, said: “The reason projects like Hornsea are important is because it sets a new standard for offshore wind, demonstrating globally that clean energy projects of this scale are achievable, which in turn will help reduce carbon emissions from fossil fuel production. Not only is Hornsea One the biggest offshore wind farm in terms of scale, it’s also the furthest from shore a wind farm has ever been built, which of course presents many logistical challenges, not to mention the weather 120km out to sea!”

The International Energy Agency (IEA) predicts that offshore wind capacity will grow around the world. It currently provides just 0.3% of global power generation, but its potential is vast.

The global offshore wind market grew nearly 30% per year between 2010 and 2018, benefitting from rapid technology improvements and about 150 new offshore wind projects are in active development around the world. Europe in particular has fostered the technology’s development, led by the UK, Germany and Denmark.

Dogger Bank Wind Farm, which SSE Renewables is jointly developing with Equinor, is going to be fully completed in the mid-2020s. It will be the first in Europe to install GE’s Haliade-X turbine, the most powerful turbine in the world.

Onshore construction on the project began one year ago, three phases are following and the first power is expected in September 2023.

“Dogger Bank will play a key role in helping the UK reach its target of net zero emissions by 2050 as well delivering significant economic benefits to the UK, including hundreds of jobs and a lasting operational presence in the North East of England for many years to come.”

Offshore wind is crucial to tackle climate change and it is a key technology for the UK’s current and future economic prosperity, according to trade association RenewableUK.

“The UK is the world’s leader in this technology, with more capacity installed than any other country, the biggest offshore wind farms and the most powerful turbines. Giant projects under construction like Hornsea One and Dogger Bank will help us to more than quadruple our offshore wind capacity over the course of this decade. Offshore wind will become the backbone of the UK’s clean energy system, delivering over a third of all our electricity by 2030,” RenewableUK’s Director of Strategic Communications Luke Clark told Forbes.com.

“This clean technology is regenerating the UK’s coastal communities and our supply chain extends to every part of the country. The industry is investing £250m in the UK supply chain, ensuring that 27,000 people will be working in the UK’s offshore wind sector by 2030. UK companies already working in the offshore wind sector are exporting their products and services to 15 countries in Europe, North America, Asia and Australia. The value of the UK’s offshore wind exports is set to increase fivefold to £2.6 billion a year by the end of the decade.”

How To Choose A Crowdfunding Platform