Breaking
Best Incentive To Get Vaccinated: Money, Messaging, Or...
Page Level Query Analysis at Scale with Google...
How A CIO Can Align IT With Business...
Blogger of the Month: Jo, Girl Eats World
6 Things Women In Business Know That Men...
How to Use First-Party Data for Ad Personalization
Pressing Reset—Putting A Fallen Unicorn Back On Its...
How We Went Viral: Promoting Content with Influencers,...
Blame Olympic Record Price Tag For Return To...
Apple iOS 14.5 Release: Should You Upgrade?
Why Gaming Gear Company Razer Launched A $50...
Technical SEO Implementations to Increase the Impact of...
30 Brilliant Ways to Market Your Eco-Friendly Shopify...
15 Tech Industry Leaders Share Overused (And Misused)...
How to Use Amazon Posts to Promote Your...
U.S. House Passes Bill To Create First Crypto...
Home Business The Chicago Bulls Are A Mess
Business 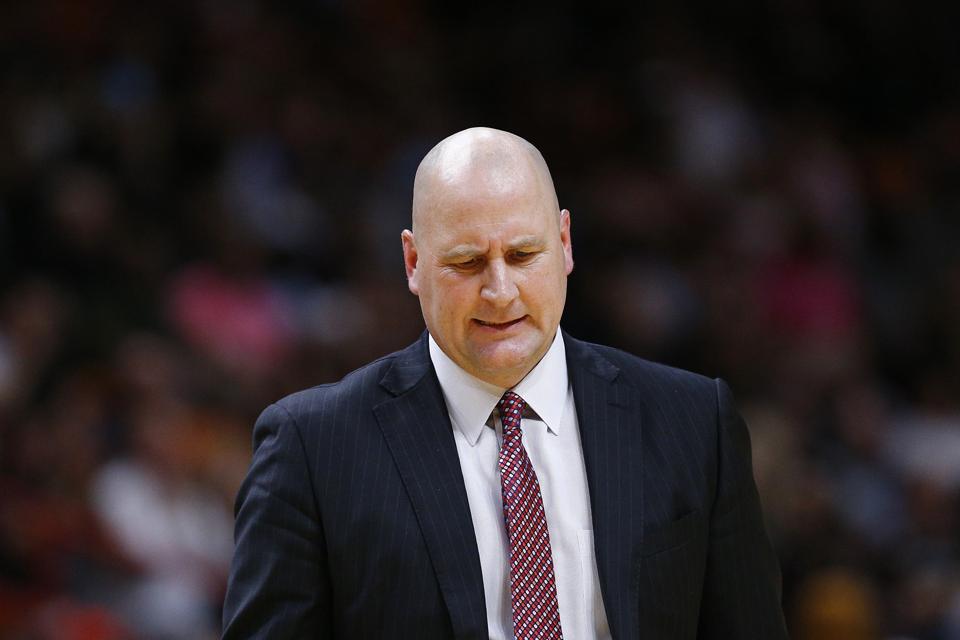 MIAMI, FLORIDA – DECEMBER 08: Head coach Jim Boylen of the Chicago Bulls reacts against the Miami … [+] Heat during the second half at American Airlines Arena on December 08, 2019 in Miami, Florida. NOTE TO USER: User expressly acknowledges and agrees that, by downloading and/or using this photograph, user is consenting to the terms and conditions of the Getty Images License Agreement. (Photo by Michael Reaves/Getty Images)

The Chicago Bulls have underperformed this season, sitting at an unimpressive 10-18 record after a marsh-mellow schedule to open up the year. Their season includes losses to the Golden State Warriors, twice, Charlotte Hornets, also twice, New York Knicks, Brooklyn Nets without Kyrie Irving and Caris LeVert, as well as two losses in four days to the struggling Portland Trail Blazers.

Head coach Jim Boylen has been a lightning rod for criticism all year long, and even since his promotion last season after the dismissal of Fred Hoiberg. Boylen’s continuous bizarre quotes during pre- and post-game scrums (here’s Boylen saying he wants the team to average 35 assists a game – something that’s never been done in the history of the game), unidentifiable substitution patterns, and overall whacky behavior has not been a welcomed addition for a Bulls fan base who is fed up with the direction of the franchise, and the constant drama that surrounds it. For many, the Bulls are becoming the mid-west version of the Knicks, which is not a desirable outcome.

Coming into this season, expectations were high due to a significant talent injection over the off-season, in which the Bulls signed Thaddeus Young and Tomas Satoransky, while adding Coby White and Daniel Gafford in the draft. Boylen himself was quoted as saying the goal was the playoffs before the season, which seems to not necessarily be the current goal after this underwhelming start.

What we said is our goal is to challenge and compete for the playoffs. I don’t know why that changes. And the reason we said that, the summer we had and the changes we made and the draft and the buy-in in September, our players felt good about themselves. And we all felt good about it. The way Jim is wired, we’re all wired, why shouldn’t we be sending the message to them to compete for the playoffs? If that’s a pressure you put on people, I’m fine with that. I don’t waver. But I don’t know where that lands. I don’t know if that’s a realistic thing right now. We certainly haven’t played like a team that’s playoff-bound. But 50-some games left, it can change. If it doesn’t, we obviously didn’t achieve something that we thought we could’ve.

It seems unrealistic for the Bulls to break through and make a run towards the post-season. They did grab a win against the Los Angeles Clippers on December 14th, just hours after Paxson spoke to the media. But the Clippers were without Kawhi Leonard and Lou Williams, and the win marked just the first victory against a winning team all season for the Bulls.

To make matters worse, things aren’t going all that great internally either.

Young, who signed a three-year contract worth $41 million, is playing just 21.7 minutes a night, despite being a stabilizing veteran presence on the court who offers defense and disciplined play. When SB Nation’s Ricky O’Donnell pointed out that Young ranks eight in minutes on the Bulls, Young’s wife, Shekinah, took note.

Shekinah Young isn’t the only partner who has raised concern about the way the Bulls have handled things this season. Jaclyn Humphry, girlfriend of Otto Porter Jr, showed disappointment in how long it took the Bulls to diagnose Porter Jr with a broken foot. The Bulls reported the fracture, as well as a new timetable for Porter Jr’s re-evaluation, after the forward had already missed 16 games.

In late November, Zach LaVine revealed there were trust issues between himself and Boylen, and responded by scoring 49 points in a wild comeback win against the Hornets in which he made 13 three-pointers. The two have apparently patched things up, but this was the second go-round between the pair, going back to last season.

As for on-court issues, third-year forward Lauri Markkanen is suffering through his worst season as a professional, the timing of which is unfortunate given the expectations that were put on him entering the season. Markkanen, while better in December, is averaging a career-low in points, rebounds, and shooting percentages across the line. His December (16.9 points and 6.8 rebounds), the best month of the season for him, even falls short of last year’s numbers.

LaVine, who started the year averaging a modest 19.5 points over his first 16 games before the aforementioned explosion against Charlotte, has been averaging 26.8 points in the 12 games since, with Chicago’s winning percentage only marginally improving. LaVine has been open about his desires to become an All-Star, but his, and Chicago’s, flaccid start may force him to wait another year to enter that conversation.

As a team, the Bulls have the second-worst offense in the league. They rank 27th in eFG% (49.7) and dead-last in FG% from within three feet, despite taking the second-most shots from that distance in the league. They rank third-last in FG% on shots from three-to-ten feet, ultimately making them, along with – ironically – the Knicks, the worst offensive teams in the NBA from within ten feet of the basket.

Defensively, Boylen has decided he wants his team to attack opposing ball-handlers, often sending center Wendell Carter Jr out to the three-point line to double-team or pressure the ball-handler, which has led to opponents swinging the ball, and thus the Bulls allowing the third-highest opponent’s percentage of corner three-pointers rate at 24.7 percent, which they’re hitting at a 39.7 percent clip.

Carter Jr, already one of the most mature members of the team at just age 20, has hinted at his dislike of that defensive design:

A 20-year-old has become the voice of reason in Chicago. That’s both good and bad, depending on where you sit.

In short, times are bad in Chicago. Attendance are dwindling, and yet management seems to have no shortage on the length of their leash, with team governors Jerry and Michael Reinsdorf sticking with what’s not working. It’s been a longstanding tradition of the Reinsdorfs to reward incompetence, and that tradition seems to continue.