China has surpassed Japan as Asia’s leading naval power. After two decades of explosive growth, the Chinese fleet now possesses more ships and more missiles than the Japanese fleet does.

“The balance of naval power in Asia is shifting dramatically,” Toshi Yoshihara, a fellow with the Washington, D.C. Center for Strategic and Budgetary Assessments, wrote in a May 2020 study. “China’s rise as a sea power could undermine Japan’s longstanding position in the Western Pacific and, in the process, undercut U.S. regional strategy in Asia.”

Yoshihara reveals the tilting balance of power in a series of informative charts. This first underscores the fundamental dynamic at play. In opening its economy starting the late 1990s, China fueled a broad economic expansion than paid for a much bigger and more powerful military.

Japan’s economy meanwhile barely has grown at all, with obvious implications for Tokyo’s own military outlays. 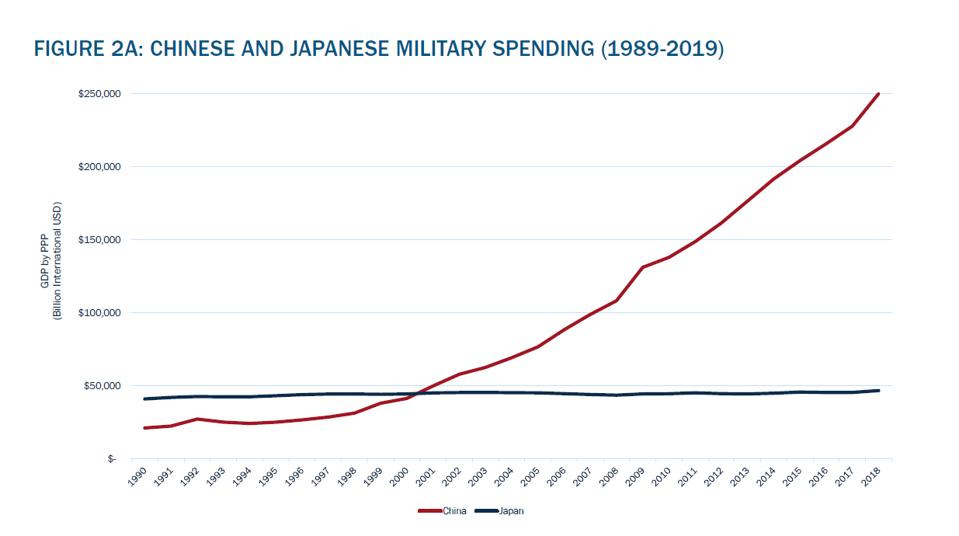 Between 1990 and 2020 the number of corvettes, frigates, destroyers, cruisers and helicopter carriers in the Japanese fleet declined from around 64 to 51. 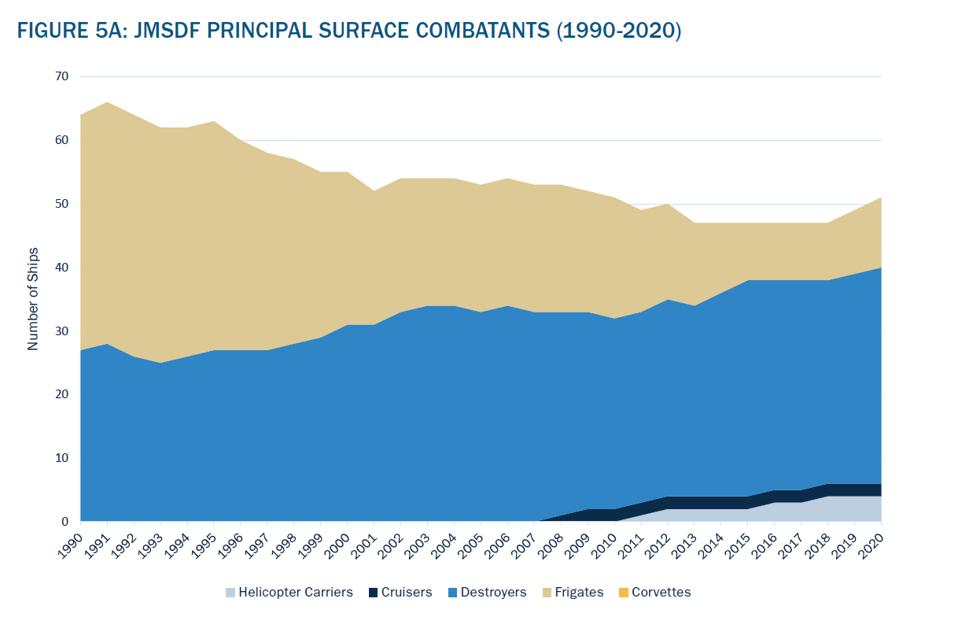 The number of Chinese vessels of these types at the same time swelled from around 55 to no fewer than 125. 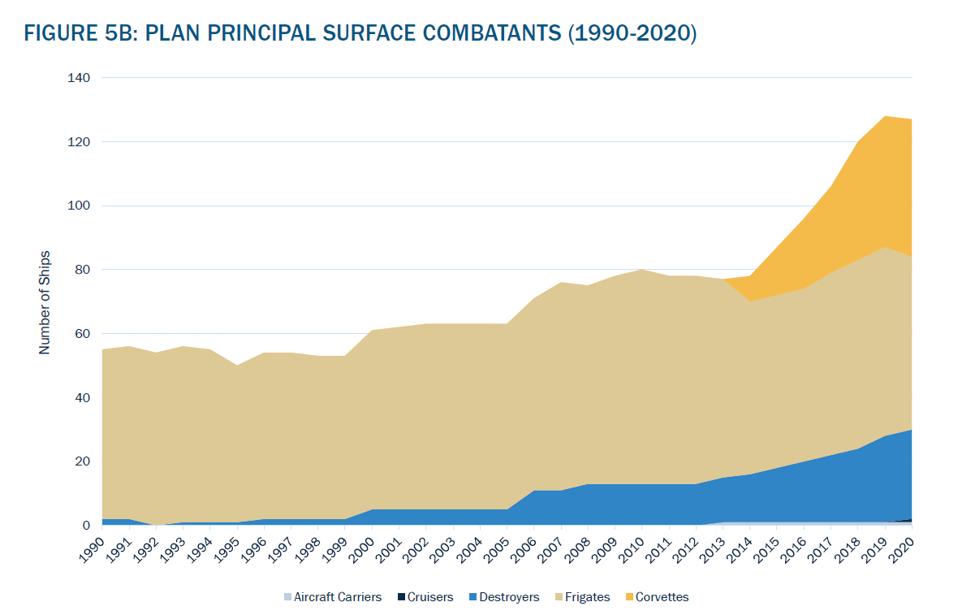 Sheer numbers don’t tell the whole story, of course. Japanese warships on average still are much larger than Chinese warships are. Size matters. The bigger a warship is, the more survivable it is in combat and the longer it can remain at sea. 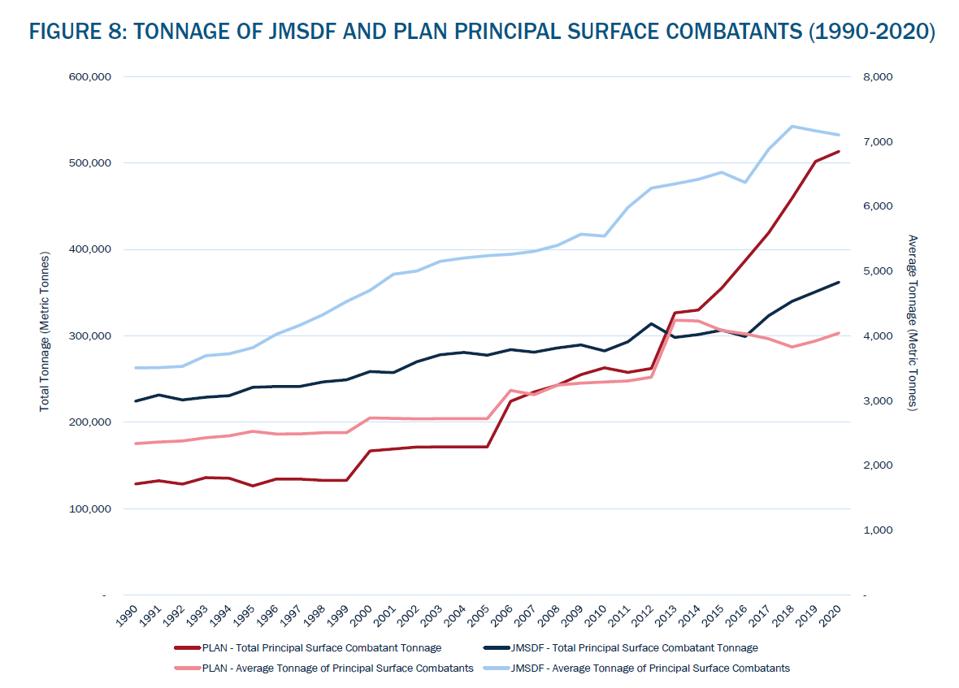 But the Chinese navy still manages to deploy many more missiles than the Japanese navy can do. A fleet’s number of vertical-launch system, or VLS, cells roughly corresponds with the amount of firepower the fleet can bring to bear. 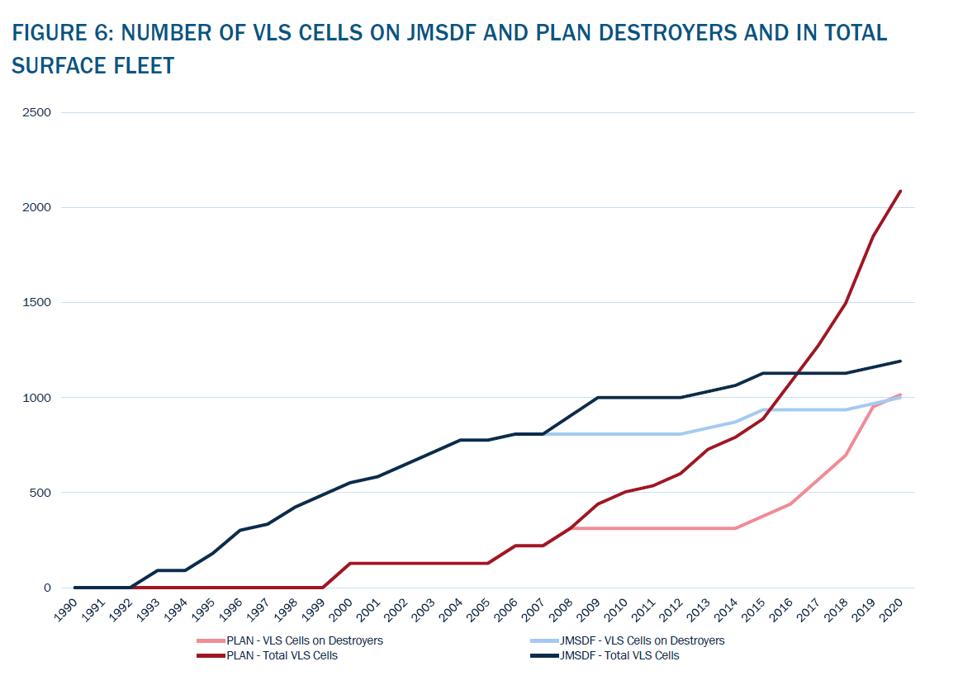 The naval imbalance has implications in Japan and across the Pacific Ocean, according to Yoshihara.

“The growing power imbalance has inclined Tokyo to guard its interests more jealously than in the past. Gao anticipates that Japan will act with greater alacrity to preserve its position, to slow its decline and to do what it can to stop falling behind China,” Yoshihara wrote. “Such sensitivity to its relative power vis-à-vis China has conditioned Japanese policymakers to react and overreact to Chinese advances in the maritime domain, making contention a far more likely outcome.”

But Japanese and Chinese leaders all assume the United States would fight alongside Japan in any major war with China. In other words, it’s inaccurate to assess Japan’s regional position versus China’s without also taking into account America’s own naval power.

Where China can deploy around 3,300 naval missiles and Japan around 1,600, the United States can deploy 6,000. Not all of these belong to the U.S. Pacific Fleet, of course—but around two-thirds do. And that means the U.S.-Japanese naval alliance could pack 5,600 missiles versus China’s 3,300.

“Whereas Beijing sees Tokyo as a declining competitor, it still views the alliance as a formidable strategic bloc,” Yoshihara wrote. “The Chinese continue to treat seriously the substantial combined military power and influence that the security partnership can bring to bear.”

“The Japanese archipelago furnishes bases and access to U.S. forces that are the foundation of American power projection in the Western Pacific Washington’s security commitment to Japan represents a powerful deterrent against provocation and aggression,” Yoshihara added. “The operational division of labor, tested and refined over decades, maximizes the strengths while mitigating the weaknesses of both allies.”

VW Holds To Financial Targets, As It Shutters...