The Coronavirus Is Becoming A Public Relations Disaster For China 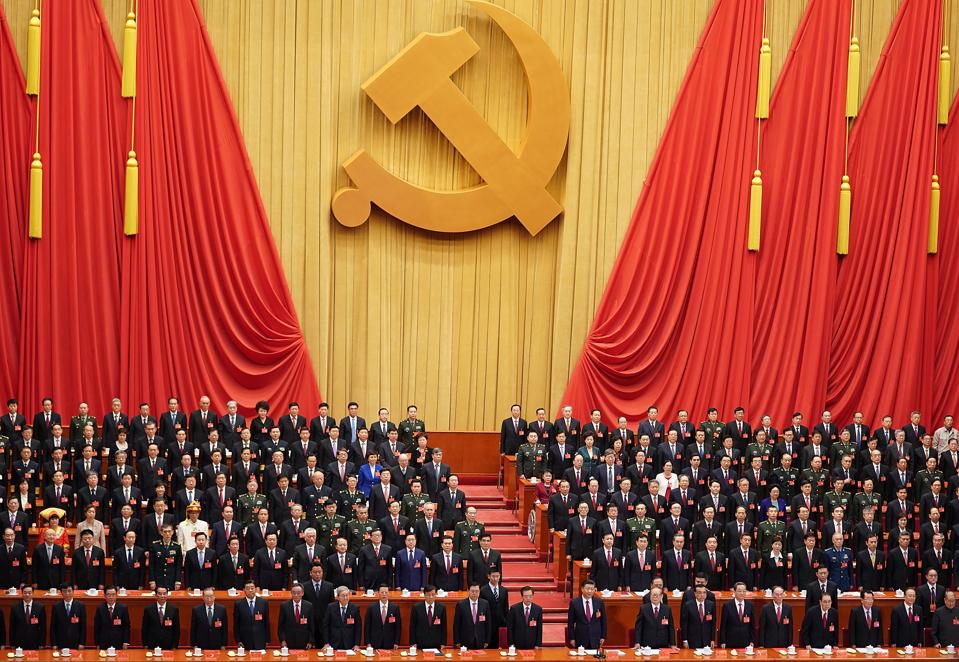 The Chinese Community Party predicted early on that the spread of the new SARS coronavirus would … [+] prove that its top-down managerial style of government would prove more successful in stopping the spread than the Western democracies. (Photo by Lintao Zhang/Getty Images)

It was only a matter of time before the coronavirus pandemic started to show a rupture in Western relations with China. Today, the market got some of the first hints of a rising probability of “decoupling”.

Evidence came today in the form of two BBC reports, one of the U.K. government of Boris Johnson (who has COVID-19 now) saying there would be ramifications for China failing to share how they stopped the virus from spreading. One such punishment was getting rid of Huawei in their 5G program.

Over the weekend, the Daily Mail reported that the Johnson team doubted China’s SARS-CoV-2 infection count, which totals around 81,000, saying they were probably off by a factor of 40.

The wide spreading disease throughout Europe is turning people off to China in leadership positions who, only a few months ago, were fine with Beijing and thought the U.S. trade war with China was just Trump being Trump. Three years ago, Davos Man invited Xi Jinping to the World Economic Forum, heralding him as the new leader of the free trade world.

The other signal today comes from news reports that Spain, Turkey and The Netherlands are angry with their Chinese partner over what they described as faulty medical equipment used to combat COVID-19.

COVID-19 is the disease caused by the new SARS coronavirus, first reported in Hubei province China in late December. 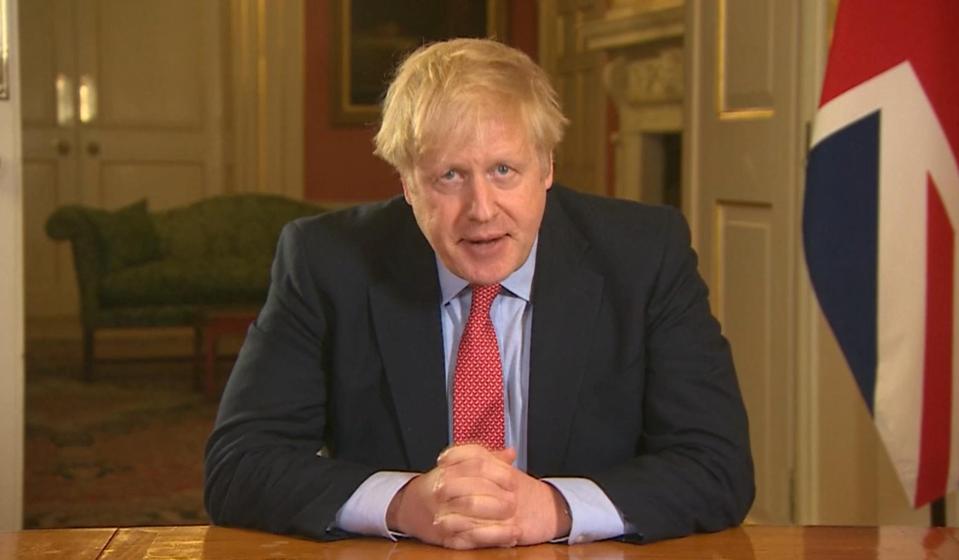 British Prime Minister Boris Johnson has COVID-19. He is reportedly livid with the Chinese … [+] government not sharing information on how to fight back the new and deadly SARS virus. (Photo by PA Video/PA Images via Getty Images)

The Dutch health ministry announced it had recalled 600,000 Made in China face masks. The equipment was used by front-line medical teams. Dutch officials said that the masks did not fit right, and that their filters did not work as intended, the BBC reported on Monday.

“The rest of the shipment was immediately put on hold and has not been distributed,” a statement read. “Now it has been decided not to use any of this shipment.”

On Sunday, U.S. Senator Tom Cotton tweeted out a South China Morning Post story about how Chinese movie theaters are being shuttered one week after being reopened.

Cotton noted, “China just shut down movie theaters nationwide after reopening them. Sound to you like they have pandemic under control? Me neither. China is still lying.”

Cotton is a consistent China basher, but his comments come at a time when Italy and the U.S. have long passed China’s total infections. Spain passed this weekend, now with over 85,000 cases. Italy has 11,591 deaths, nearly four times that of China.

The Western world are being made to look like the Three Stooges.

People in the markets are scratching their heads, trying to figure out a timeline as to when this all ends, but unable to fully trust China. Afterall, they ask, how did the epicenter of the outbreak manage to get away with just 81,000 cases, while Italy is still not at peak coronavirus, and some U.S. states are only just getting started?

For sure, China will recover from the coronavirus before it recovers from this face plant with its big investors in the West. The longer this disease ravages the U.S. and Europe, the more it turns into a public relations disaster for the Chinese government.

Their economies are in lockdown and in freefall.

What was once a European recovery story in 2020 is now another year of economic contraction, especially in Italy.

The U.S. economy is also seen ending the year in the red, based on economic projections by Barclays Capital. Every week, the forecasts keep getting worse.

The capitalist Democracies of Europe and the U.S. are on life support, ironically of the kind that requires big government spending to keep people employed who are otherwise at home watching Netflix. In Italy, they cannot even go out for a jog in Milan. In Brazil, Rio de Janeiro beaches are closed. In the U.S., Disney World, the symbol of American life, is closed. Central Park, the heart of the most important city in the nation, has been turned into a M.A.S.H. unit.

As people watch this unfold, Beijing’s response to the coronavirus is increasingly treated with skepticism, if not anger in government circles. They feel China got away unscathed, despite the fact that China is still very much living with this today.

Reports of faulty test kits and medical equipment serve to amplify existing apprehensions. The China zeitgeist is a bit dismal.

In a report by Business Insider yesterday, reporter Adam Payne quotes (anonymously) a British official saying, “There has to be a reckoning when this is over. The anger goes right to the top.”

To be sure, President Xi Jinping has his plate full, says Vladimir Signorelli, head of Bretton Woods Research, a macro investing research firm out of New Jersey. “Repairing China’s global trust may come at a price,”he says. “We expect the Chinese to become more willing to concede in trade negotiations with the U.S. going forward because it’s all about volume and market share. They don’t want to lose anymore market share in the supply chain then they have to because of this disaster.”

American multinational corporations operating in China are likely to take a longer-term view on the China market, especially if China is a domestic market for them, or a launching pad into southeast Asia.

But if COVID-19 severely hurts the home market, then watch for foreign companies to become less ambitious about being in China, UBS strategists led by Wendy Liu in Hong Kong wrote in a client note dated March 27. 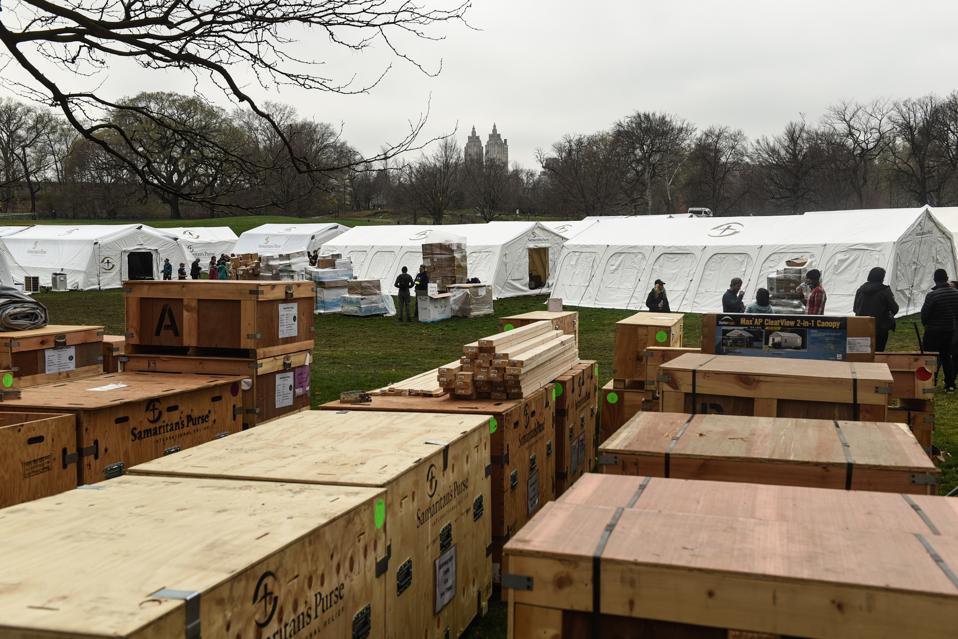 People set up an emergency field hospital to aid in the COVID-19 pandemic in Central Park on March … [+] 30, 2020 in New York City. (Photo by Stephanie Keith/Getty Images)

“If Chinese subsidiaries are not profitable and remain difficult to turnaround, then the decision to sell or exit could be made. American small to midsized business suppliers based in China are lagging the big corporations in work resumption by about two weeks, and we believe are more likely than the larger companies to exit China,” she says.

Giant corporations like Starbucks and Tesla may very well increase investment there as promised, but that has to do with the local market. That is not an offshoring story.

Meanwhile, as far as China’s coronavirus numbers go, other Asian countries that have had experience with SARS in 2003 were quick to restrict travel, require surgical masks in public, and institute social distancing and other measures to stop the spread. Hong Kong, Singapore, Taiwan — they have been experts at keeping this thing under control.

If the U.S. can’t trust China for guidance, then they don’t have to look far for a worthy group to imitate.

For its part, Hubei was locked down and people were required to shelter-in-place. Grocery stores were not opened. The government appointed people to do the shopping and delivery to the tens of millions of people stuck at home.

Unlike South Korea, China did not test vast amounts of people so those who may have died and not tested for COVID-19 were unlikely to be counted in the official tally.

“The hardest thing for me was that people died in Wuhan because we didn’t have the ICU beds…especially in the early stages of the outbreak,” says Doctor Peng Zhiyong, Dir of Critical Care at Wuhan’s Zhonghan Hospital in Hubei.

He said that of the patients that needed ICU during the one month period of February 8 to March 7, 25% to 30% of them died. “Asymptomatic patients were probably main source of transmission,” he says, despite some in China saying there is still no evidence of asymptomatic transmission to this day. 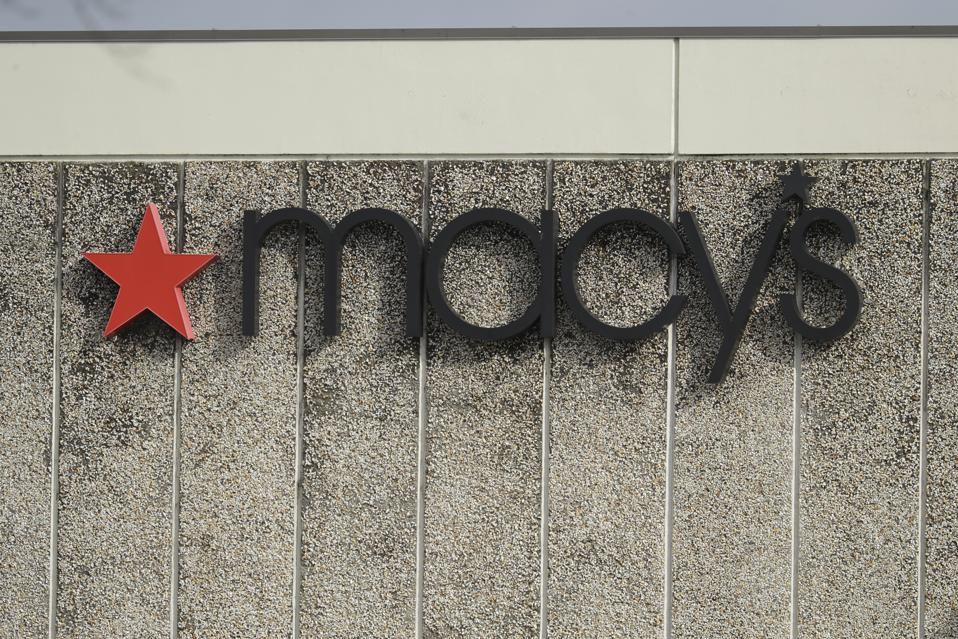 Information on how to contain, treat and kill COVID-19 are all over the place.

The U.S. government recently toyed with the idea of locking down the tri-state area of New York, New Jersey and Connecticut, the new American Hubei province, but has since balked on that call.

This could prove to be the unwinding, helping spread a disease already cranking up in New Orleans and Detroit as New Yorkers look to get off Manhattan.

President Trump this weekend extended the recommended quarantine measures until the end of April.

By comparison, the epicenter of Hubei was locked down for two months.

This fact isn’t lost on some money managers.

“Yeah, I think we could even go longer than a month,” says Sam Hendel, co-fund manager of the $5 billion asset manager Levin Easterly Partners in Manhattan. He is now working out of his home in Westport, Connecticut. “This is going to take longer because pockets of the country are just starting with this. Spring breakers are coming back and they’re sick and they’re going to get their families sick, and that’s concerning to me,” he says, warning: “Calling a bottom and using China for timing it is a fool’s errand.”