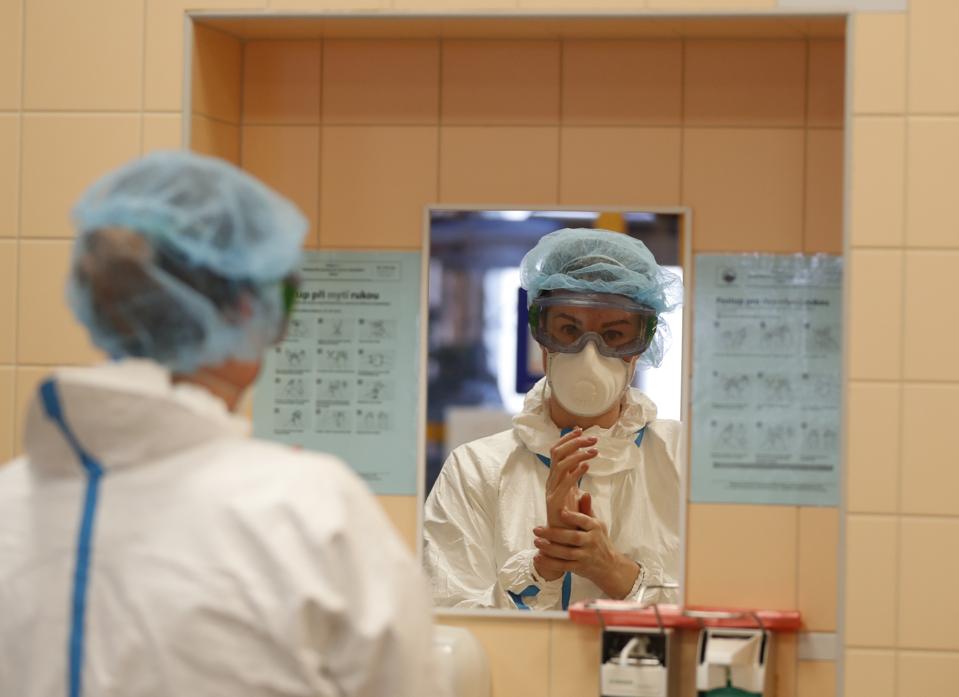 A healthcare worker washes her hands during her shift at an intensive care unit (ICU) at the General … [+] University Hospital where patients infected with the COVID-19 are treated in Prague, Czech Republic, Tuesday, April 7, 2020. (AP Photo/Petr David Josek)

A single person with COVID-19 may be more likely to infect up to 5 or 6 other people, rather than 2 or 3, suggests a new study of Chinese data from the CDC. It’s not clear if this higher number applies only to the cases in China or if it will be similar in other countries.

If the higher number does remain true elsewhere, it means that more people in a population need to be immune from the disease—either from having already had it or from a vaccine—to stop it from circulating.

The new study, published in the Emerging Infectious Diseases journal, shifts the R0 for COVID-19 from about 2.2 to about 5.7. With the lower number, only 55% of a population needs to be immune from COVID-19 to stop its spread through herd immunity. Herd immunity refers to enough of a population being immune to a disease that the disease cannot travel through it.

But if more people get infected from a single person with COVID-19, then more people need to be protected from the disease to stop it from continuing to spread. With an R0 of 5.7, approximately 82% of the population needs to be immune to reach herd immunity and stop the disease from spreading easily through the population, the researchers concluded.

The new calculations also estimate the incubation period—the time from being exposed to the virus and developing symptoms—to be an average of 4.2 days, which is in line with most other estimates (though symptoms can still take up to 14 days to show up).

Because people can be contagious before realizing they are infected, identifying and isolating patients, plus following up with people they interacted with, will only work to contain COVID-19 if only a small number of people with the disease aren’t aware they’re infected.

“However, when 20% of transmission is driven by unidentified infected persons, high levels of social distancing efforts will be needed to contain the virus, highlighting the importance of early and effective surveillance, contact tracing, and quarantine,” the authors wrote.

What Does R0 Mean?

Scientists measure how contagious a disease by its basic reproduction number, referred to as R0 (pronounced “R nought”). The R0 refers to how many people a single infected person will infect in a population.

For example, the R0 of influenza is 1.3, which means, statistically, one person with the flu will infect 1.3 others in the population. (Obviously you cannot infect one third of a person, but this mean that 3 people together with the flu will, on average, infect 4 other people.) The R0 of measles is estimated between 12-18— though there’s debate about the exact range—so a single person with measles will infect about 12-18 people in a population that’s vulnerable to it (where no one has had it and no one has been vaccinated).

If that number is accurate, the researchers estimate the R0 of COVID-19 to be about 5.8. If they expand that period a little bit to 6-9 days to allow more margin for error, the R0 is 5.7.

“The estimated R0 can be lower if the serial interval is shorter,” the authors wrote. “However, recent studies reported that persons can be infectious for a long period, such as 1-3 weeks after symptom onset,” so they believe it’s unlikely that the average time between a person being infected and then passing along the disease is shorter than 6 days.

Why The Change Now?

Why has it taken this long to determine an accurate R0? First, the change is based on updated data, and it could change again with more recent, more accurate data. It’s hard to study an emerging disease when you’re still collecting data, and testing has been all over the map, literally. Different countries have used different tests and testing protocols, and varying strategies can influence how data is collected.

The authors point out that not having reliable diagnostic protocols early in the outbreak, changes to how cases are identified and tracked, and overwhelmed healthcare systems can throw a wrench into how well researchers can estimate the growth of an outbreak.

The early R0 of 2.2-2.7 was based on two things: early cases recorded in Wuhan before January 4, and on international flight data combined with infected people outside China.

“Because of the low numbers of persons traveling abroad compared with the total population size in Wuhan, this approach leads to substantial uncertainties,” the authors wrote. Basically, too little data existed to make reliable estimates—“common challenges associated with rapid and early outbreak analyses of a new pathogen,” the authors add.

Calculating more reliable estimates takes time because it requires getting the most accurate data possible on surveillance—the total number of cases, including estimating those that haven’t been tested or identified yet.

The new study also uses data from China to estimate the growth of COVID-19 cases, but the researchers collected data from throughout China—not just Wuhan—and included highly specific data from travel within China. The new calculations also will not be perfect, but they should be more precise and closer to being accurate than the previous ones.

The researchers used multiple modeling approaches, including one that relied on reports of 140 cases of COVID-19, mostly in China outside of Hubei Province (where Wuhan is the capital city). Although this number is relatively small, these cases represent “many of the first or the first few persons who were confirmed to have SARS-CoV-2 virus infection in each province, where dates of departure from Wuhan were available.” Since the researchers had details on when those people were diagnosed and when they left Wuhan—based on mobile phone data—the estimates have a better chance of precision and accuracy.

What Does This Change Mean?

The new R0 applies specifically to data collected in China. “How contagious SARS-CoV-2 is in other countries remains to be seen,” the authors wrote. “Given the rapid rate of spread as seen in current outbreaks in Europe, we need to be aware of the difficulty of controlling SARS-CoV-2 once it establishes sustained human-to-human transmission in a new population.”

That much is now obvious to people following the news on COVID-19’s spread. The authors recommend the same strategies to control the disease that you’ve likely been hearing about.

“Our results suggest that a combination of control measures, including early and active surveillance, quarantine, and especially strong social distancing efforts, are needed to slow down or stop the spread of the virus,” the authors wrote. “If these measures are not implemented early and strongly, the virus has the potential to spread rapidly and infect a large fraction of the population, overwhelming healthcare systems.”

In other words, if we don’t test early, identify cases quickly, isolate those people, and continue social distancing, it will be difficult or impossible to control the disease.

But the authors do offer a note of hope: “Fortunately, the decline in newly confirmed cases in China and South Korea in March 2020 and the stably low incidences in Taiwan, Hong Kong, and Singapore strongly suggest that the spread of the virus can be contained with early and appropriate measures.”

Why A Famed Texas Oil Family Is Hunting...