Breaking
Women Of Color Hill Staffers Talk New Economic...
Are You Ready For A Jaw-Dropping December? How...
FIFA 21 Next-Gen Details Revealed For PS5 And...
Being Right At Being Wrong
Click And Collect: How Retailers And Restaurants Can...
Biden’s Stock Market Is Off To A Faster...
How To Avoid Social Media Misinformation Ahead Of...
The True Cost Of Losing An RFP
When Cause And Effect Converged With Humanity
Exxon Mobil Breaks Above 200-Day Moving Average –...
This Small Business Is Looking To Make America’s...
This Woman Invented Something 160 Million Americans Will...
6 Questions To Practice Gratitude This Thanksgiving
Report: Facebook Tweaked News Feed After Election Day...
End The Month Strong With These Top Value...
From Maths Failure To Global Educator: How Knowledgehook...
Home Business The Detroit Pistons: A Puzzling Start To The Second Half Of The Season
Business 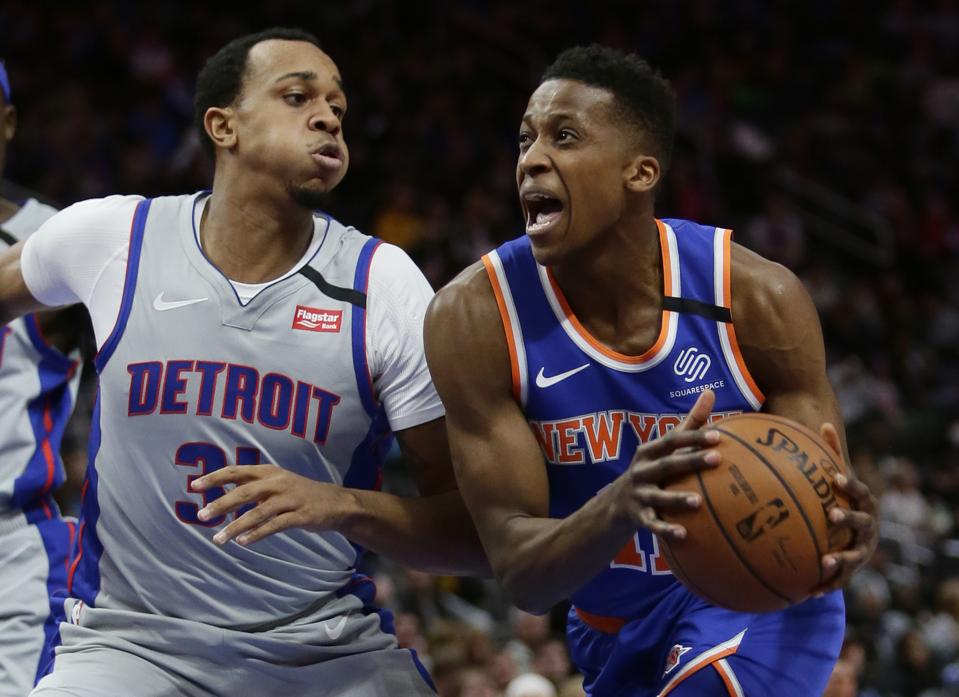 DETROIT, MI – FEBRUARY 8: Frank Ntilikina #11 of the New York Knicks drives against John Henson … [+] #31 of the Detroit Pistons during the first half at Little Caesars Arena on February 8, 2020, in Detroit, Michigan. NOTE TO USER: User expressly acknowledges and agrees that, by downloading and or using this photograph, User is consenting to the terms and conditions of the Getty Images License Agreement. (Photo by Duane Burleson/Getty Images)

The Detroit Pistons bear virtually no resemblance to the team that started the season. Andre Drummond, Reggie Jackson and Markieff Morris are gone. Luke Kennard has missed extensive time with a knee injury. In their places are Brandon Knight, John Henson and the newly-signed Derrick Walton Jr. join G-League contributors like Jordan Bone and Louis King.

It was a team that the front office expected to contend for a playoff spot, but with a 19-39 record they’ll be hard-pressed for each and every win for the rest of the season.

The Pistons have been in need of a rebuild for some time, and it’s been thrust upon them in a violent fashion this season. Perhaps they’ll come out of this rebuild better for it, but there’s no guarantee.

This past trade deadline was the most important one the Pistons have had in years, and it’s hard to call the events that transpired a win as they continue to give assets away for free even days later.

There’s a lot to digest with this team as they enter the second half of the NBA’s season, but we’ll try to distill things down.

It’s clear the Detroit Pistons took the best offer for Andre Drummond at the trade deadline, but it’s hard to imagine finding a worse return that doesn’t involve sending out your own picks to get a deal done. They received Brandon Knight, John Henson and the lesser of the Cleveland Cavaliers and Golden State Warriors second-round pick in the 2023 season.

That’s pretty close to nothing, and the Pistons decided that hitting the reset button now was better than waiting a season to hit it in a year where their plentiful cap space would actually mean some thing.

Maybe there’s value to being one of only a couple of teams that has significant cap space in a year that nobody else has cap space and also nobody else really wants it due to a poor free agent class. If there is, we’ll have to give the Pistons’ front office credit for being ahead of the curve.

It’s also possible that a scenario where the Pistons have to be the smartest guys in the room for a plan to make sense should raise red flags.

We also need to talk about the Markieff Morris situation. On Friday, Morris was bought out of the remainder of his contract and is expected to join the Los Angeles Lakers once he clears waivers.

Per Kevin O’Connor, Morris drew interest from multiple contenders at the trade deadline:

It’s interesting that three of the six teams mentioned (the Lakers, the Milwaukee Bucks and Boston Celtics) stood completely pat at the trade deadline, and one of those teams is also likely to end up getting him.

Could the Pistons have made a deal and get SOMETHING for him rather than simply buy him out less than two weeks after the trade deadline? Perhaps from a team who was interested in signing him after a buyout?

Well, apparently not, considering how things ended up.

However, given that the Lakers are reportedly waiving DeMarcus Cousins to make room for Morris, and the Sixers had to literally give James Ennis III away to get their roster into compliance before the end of the deadline, maybe there was actually some wiggle room with these interested suitors that wasn’t explored.

Even the rights to a rehabbing Cousins (their salaries would have matched) and some distant second round pick from the Lakers would have been a more palatable pill to swallow than what developed in the end.

Anyway, Pistons fans are very happy that the Los Angeles teams (Reggie Jackson joined the Clippers after getting bought out) are getting contributors from their team for free.

One of the key elements of deadline inactivity for the Pistons was a desire to maintain a veteran presence as the youth take over. Reggie Jackson and Markieff Morris were supposedly part of this equation, and Morris not getting traded was believed to be a result of this.

Derrick Rose was retained through the deadline as well for the same purpose. Now Jackson and Morris are gone, and the Pistons have Rose playing on a minutes limit after suffering an injury that occurred shortly after removing his previous minutes limit before the trade deadline.

Foregoing the opportunity to get value for Rose in an effort to make him your team vet could be justifiable, but considering how that same argument worked out with Morris, maybe the Pistons should have just gotten what they could while they had the chance.

There’s no reason to think Rose will ever be able to play outside of a minutes restriction, and getting a couple second-round picks for him would have been smart.

Now the moment has passed, and the Pistons have Brandon Knight, John Henson and an irrelevant second-round pick that will convey the year your 15-year-old graduates from high school to show for Andre Drummond, Reggie Jackson and Markieff Morris.