Breaking
The Ultimate Guide to Saving Money
Lights, Camera, Action—Is There A Post-Covid Future For...
7 Ways to Reduce Human Errors in Your...
How ‘Couples Therapy’ Used Technology To Cope With...
Can You Settle Your Student Loans Or Negotiate...
How to Use Amazon Attribution For Ad Campaigns
What are the Makings of a High-Quality Link?
How To Quickly Start And Scale Your Business
Terra Virtua: What NFTs Can Teach Us About...
5 Easy Steps To Prepare Content For E-A-T...
Physical Inactivity Linked To More Severe Covid-19 Infection...
The 2021 Estimated Tax Dilemma: What Tax-Return Pros...
Want To Digitally Transform Your Business? Start With...
How to Optimize Google My Business and Leverage...
Debunking Link Building Myths in 2021
How, When And Where You Can Gaze At...
Home Technology The Dutchies Land At CES And Show You Why Start-Up Innovation Matters
Technology 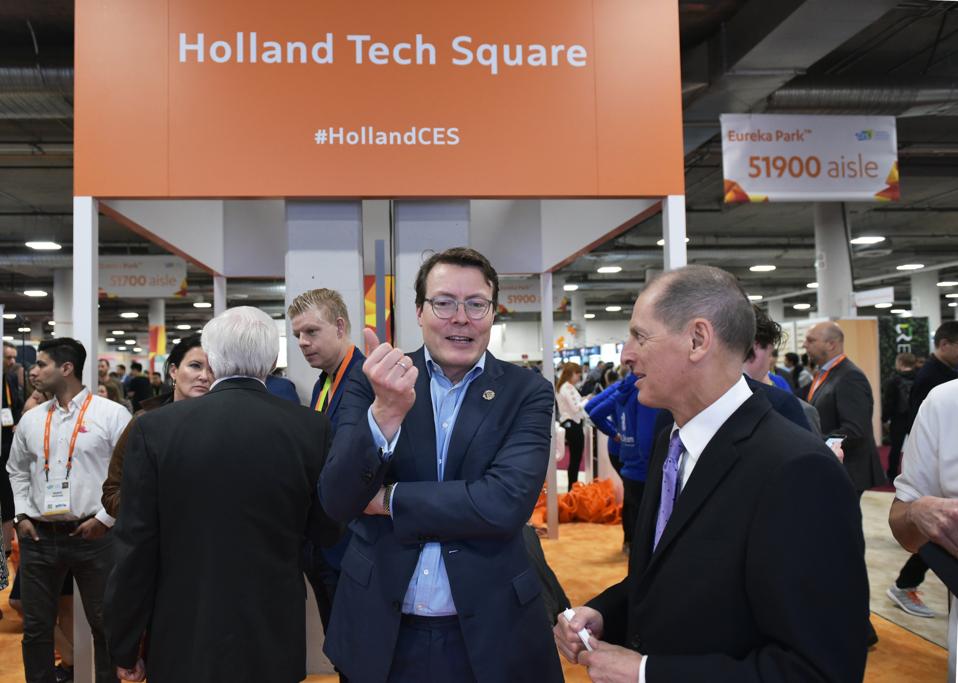 Ranked as a leading Information, Communications and Technology (ICT) innovator and a digital gateway to Europe, The Netherlands is the sixth-largest economy in the European Union. The country is also the birthplace of the fire hose, the microscope, the submarine, the CD, Wifi, and LED technology.

2019 was a robust year for Dutch startups, with more than one billion in investment. Startup Genome released its 2019 Global Startup Ecosystem Report which noted that the Amsterdam-Startup Delta jumped from #19 #15 in 2019 in just two years. The Dutch government also made a €65 million fund available for startup and scale-up policies.

At the upcoming Consumer Electronics Show (CES), January 7-10, 2020 in Las Vegas, the Netherlands Tech Square will showcase 50 startups which are focusing on critical sectors that will define future economies such as energy storage, sustainability, smart mobility and smart cities to augmented reality, virtual reality, artificial intelligence, health, and med-tech and robotics.

According to Techleap.nl, a startup ecosystem accelerator in the Netherlands, the total aggregate funding of the 50 startups in the 2020 CES Pavilion is $78 million.

“The CES-focus this year is more than ever on presenting resilient technologies that offer solutions to social and global challenges,” said His Royal Highness, Prince Constantijn van Oranje who is the Special Envoy to Techleap.nl. “This fits in seamlessly with Techleap.nl’s mission to empower Dutch leaders in tech to future-proof the Netherlands and the world.”

In November 2019 at Fortune’s Global Forum, Prince Constantijn van Oranje spoke on a panel about Europe’s Silicon Valley and what it will take for Europe to maintain its competitive edge. He commented that ‘Europe had missed the boat’ and needed a ‘more vibrant entrepreneurial and venture-capital culture.’

“The 50 selected startups, showcase our continuous output of public value: using tech to deliver a positive societal impact,” said Prince Constantijn van Oranje. “This is what motivates entrepreneurs in The Netherlands, and this is what we can contribute to the world.”

Some of the start-ups at CES 2020 include Hiber, a nano-satellite constellation providing affordable and global connectivity for IoT devices using ultra-low-power modems; Coolfinity a refrigerator designed for use in countries with unreliable power to prevent food waste; and, 20tree.ai maps and monitors the quantity and quality of vegetation in cities to improve decision making for urban green spaces.

Other startups centered around healthy living include AirBliss+ is a smart anti-pollution mask; Heatbox is a self-heating lunch box that autonomously heats your meals anytime; Reducept an AR/VR game designed to reduce pain, help manage chronic pain; and, Plasmacure which stimulates healing of hard-to-heal wounds.