Breaking
No, There Isn’t A Black Hole At The...
The Fed Could Be Repeating This Key Mistake...
Japanese Lawmaker Becomes Billionaire By Selling E-Signature Services...
4 Tips For Attracting Your First ‘Dream Client’...
Want To Generate More Sales This Holiday Season?...
Your ‘Harvest Moon’ Moment Is An Illusion: Why...
Google Meet’s Unlimited Calling Will Continue To Be...
The Need For Speed-Is Quantum Computing A Good...
Stock Market Crash: The End Game Approaches
Best Video Conferencing Software
House Democrats Debate Bill To Allow Student Loan...
For These Indigenous Artists “Land Back” Is Both...
The Current Tech Stock “Bubble” Reflects Pessimism, Not...
A Look At What’s Inside House Democrats’ New...
Page Authority 2.0: An Update on Testing and...
How Public Health Experts Are Harnessing The Power...
Home Business The Economics Of Panic Buying
Business

The Economics Of Panic Buying 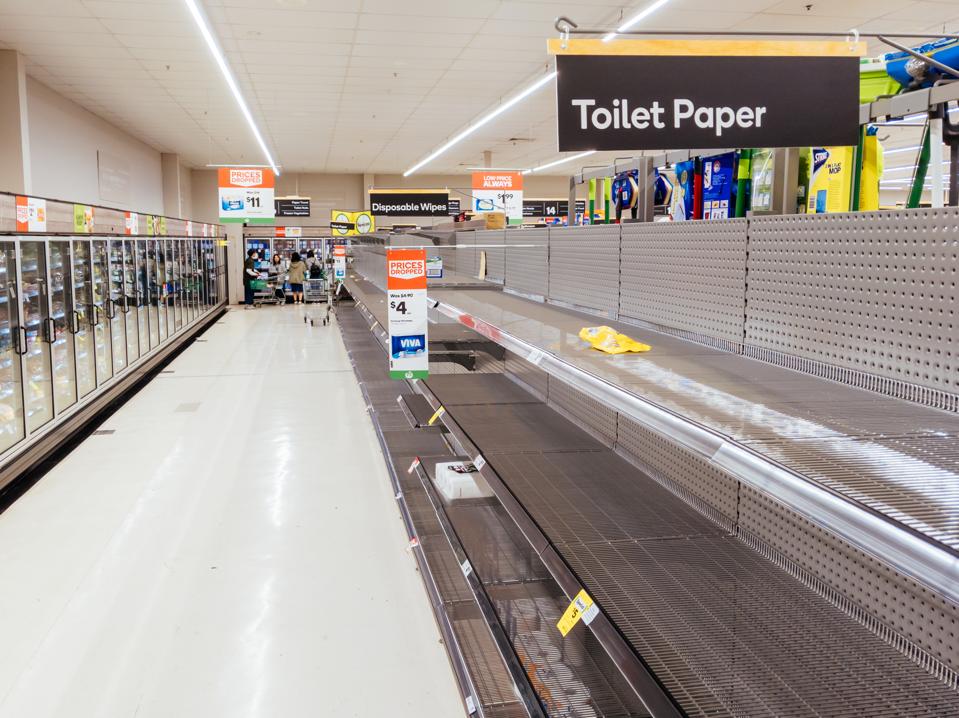 In Australia, where Wolfers was born, one desperate customer reportedly pulled a knife trying to score the last roll on the shelf at a Woolworths supermarket in Sydney.

Wolfers believes desperate buyers aren’t crazy. “The economics of toilet paper shortages is the same as bank runs,” he tweeted. You stockpile toilet paper because others are stocking up too, depleting supplies.

“My argument is simply that panic buying can be rational,” said Wolfers in a phone interview with Forbes on Wednesday. “There is nothing inherent in markets that prevents this.” Until the FDIC started guaranteeing bank deposits in 1933, it made sense for nervous depositors to pull their money out when they saw their neighbors doing the same.

What can be done to preclude toilet paper shortage-sparked violence? “The U.S. needs a strategic toilet paper reserve,” said Wolfers, guaranteeing that Americans have the supplies they need should stores run out.

In all seriousness, what does Wolfers think fear-sparked buying means for U.S. retailers like Costco, Walmart, Target and Kroger? “In the short term it’s good news,” he says, because extra purchases spike revenues. But in the long run, it’s unlikely to change those companies’ fortunes. “Once they have more toilet paper, people aren’t going to pooh more,” he says. They’ll wait until their supply runs out to make further purchases.

Oliver Chen, a retail analyst at Cowen in New York, says virus-driven panic buying is giving a boost to curbside services offered by companies like Target and Walmart. Target reported this week in an earnings call that once customers try the service, where they order and pay online and then pick up their purchases at a designated spot outside a store, they increase their spending at Target by 25%. Cowen estimates that only 10%-11% of shoppers use the service, leaving plenty of room for growth.

One more plus for retailers: “When you use the curbside service, it increases your loyalty as a shopper,” says Chen. He predicts that panic buying will drive up sales by 1%-2% in the first quarter at retailers who sell groceries and staples. Given that operating margins are a low 3%-7%, even a small increase in sales is significant.

Sucharita Kodali, an analyst at Forrester, says many retailers have missed an opportunity to hike prices during the scare. “What should have been a winning lottery ticket these guys were handed, they basically squandered,” she says. Without gouging customers, stores could have easily hiked prices by 10% or more on staples and banked the extra profit. “A lot of retailers foolishly let that opportunity pass,” she says. (Most state price-gouging laws, barring increases of 10% or more, only kick in after a state of emergency has been called.)

Wolfers disagrees with Kodali about the wisdom of price hikes during a perceived public health crisis. “Costco’s implicit promise to the customer is, ‘we will never screw you,’” he says. “Raising prices on toilet paper would destroy that trust.”

Rupesh Parikh, a retail analyst at Oppenheimer, says Costco made the right call to hold prices steady. “Costco is a company that puts the customer at the center of everything they do,” he says.

Yesterday Costco reported that February 2020 sales increased 13.8% over the previous year due to “concerns over the coronavirus.” Though Parikh rates the stock a “buy,” he doesn’t believe the Issaquah, Washington-based chain, whose revenue hit $155 billion last year, will benefit from coronavirus buying in the long run. Shoppers who bought extra staples in February will wait to replenish them, possibly causing a sales dip in coming months. “If people don’t use up their supplies, that poses a risk going forward,” he says.

In Australia, where there are 52 confirmed cases of coronavirus including two deaths, a Costco store in Canberra has reportedly set limits on toilet paper purchases. Customers can buy no more than two 48-roll packs at a time. That should last them awhile.

The Trump Tax Cut Is Two Years Old, Where Are The Jobs Being Created?