Breaking
Mayo Clinic And Kaiser Permanente Invest $100 Million...
MozCon Virtual 2021 Interview Series: Wil Reynolds
Commodity Spikes May Be Close To Peaking, Futures...
Benefits of Responsive Web Design
ESBC Major Updates: Tons Of Heavyweight Greats Added...
5 On-Demand Courses To Help Develop Your Leadership...
How to Run Nonprofit Marketing Ads
Entrepreneurs Are Bringing Transparency To Home Buying And...
Best Incentive To Get Vaccinated: Money, Messaging, Or...
Page Level Query Analysis at Scale with Google...
How A CIO Can Align IT With Business...
Blogger of the Month: Jo, Girl Eats World
6 Things Women In Business Know That Men...
How to Use First-Party Data for Ad Personalization
Pressing Reset—Putting A Fallen Unicorn Back On Its...
How We Went Viral: Promoting Content with Influencers,...
Home Business The Estimated Purses For Anthony Joshua Vs. Andy Ruiz 2 Fight Are Staggering
Business 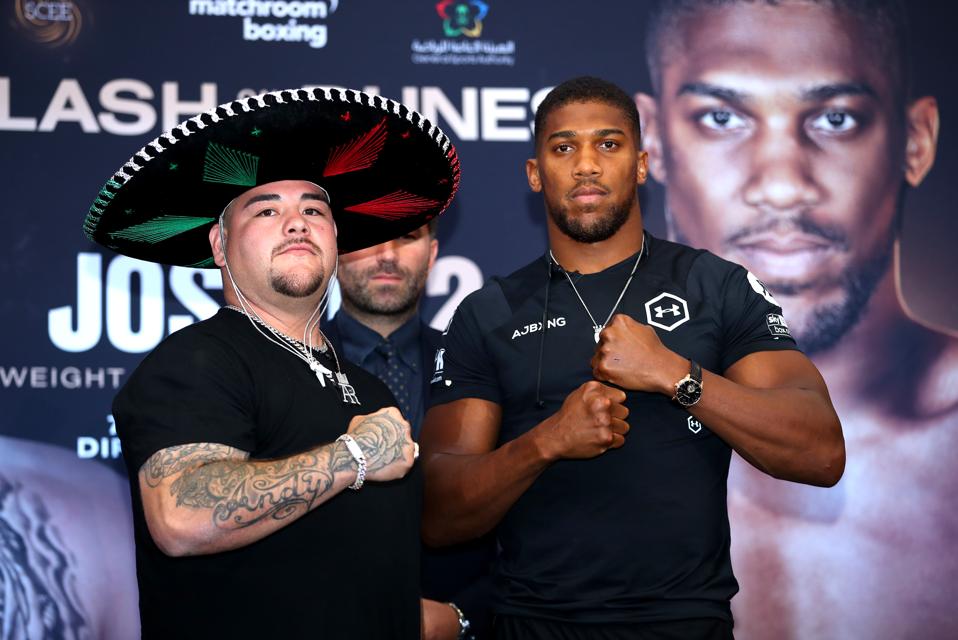 LONDON, ENGLAND – SEPTEMBER 06: Andy Ruiz Jr. and Anthony Joshua pose for a photo during the press … [+] conference for Andy Ruiz Jr. v Anthony Joshua 2 ‘Clash on the Dunes’ at the Hilton Syon Park on September 06, 2019 in London, England. Anthony Joshua and Andy Ruiz Jr will have a Heavyweight World Title rematch fight on December 7th 2019 in the historical town of Diriyah, Kingdom of Saudi Arabia. (Photo by Richard Heathcote/Getty Images)

Anthony Joshua will attempt to regain his WBA, IBF and WBO Heavyweight titles on Saturday in Saudi Arabia when he faces current champion Andy Ruiz Jr. in a rematch. Ruiz won the first meeting by seventh-round TKO, but despite Joshua not being the reigning champion, he stands to take the lion’s share of what is reportedly a mammoth dual payout.

According to Chris McKenna of Daily Star Sports, Joshua is set to make upwards of $60 (USD) million for the rematch. This is still an unconfirmed total, but there is every reason to believe these numbers are at least in the right ballpark.

Joshua is still the A-side in this matchup for a variety of reasons. First, his star power as arguably the most popular British fighter in the world, wasn’t tarnished with his loss to Ruiz.

Secondly, he’s backed by the powerful Matchroom Boxing promotional machine, whose headman Eddie Hearn, secured a massive $40 million site fee to bring the bout to Saudi Arabia. Lastly, the second fight was secured during the negotiation for the initial bout. An automatic rematch clause was installed which locked Ruiz into a set payout, no matter what other funds were negotiated for the second bout.

These concepts were substantiated by The Athletic’s Mike Coppinger back in August when the rematch was originally set up.

That’s why Joshua’s payday figures to be significantly higher than Ruiz. The $60 million total is likely a number that doesn’t include any of Joshua’s expenses or tax payouts, but nonetheless, he is in a position to make a generational-wealth payday as he attempts to avenge the first and only loss of his professional career.

Ruiz’s guaranteed payday, aside from any endorsements he’s been able to secure, is believed to be $9 million. That’s $2 million more than he earned in the first meeting with Joshua. While $9 million is nothing to sneeze at, this isn’t Ruiz’s earning ceiling.

However, he will need to defeat Joshua again, and perhaps set up another major fight with the winner of the upcoming Deontay Wilder-Tyson Fury rematch, to cash in on a higher level.

On Saturday night, we’ll find out if Ruiz caught lightning in a bottle or if he has Joshua’s number.