Breaking
Everything You Need to Know About Corporate Social...
Is Adaptive Leadership the Key to Motivating Employees?
Why business events are set to return with...
Business events set to return with a bang!
Expanding Internationally: 5 Things to Consider for eCommerce...
How the Machine Shop Is Going Digital in...
Sustainable Food Packaging Is Helping the Hospitality Sector...
Top 5 Investment Practices To Make More Money...
Managing IT Requirements for SMEs: 5 Aspects that...
How To Build a Successful Luxury Brand In...
Finding The Best Google AdWords Consultant for Your...
8 Top Tips To Help Your Agricultural Business...
Three Reasons Why Office Décor and Design Are...
Looking To Improve Efficiency In Your Business? Here’s...
AI and machine learning for business
How Social Media Changed the World
Home Business The Fed Does Not Need Fedcoin To Protect Consumers
Business

The Fed Does Not Need Fedcoin To Protect Consumers 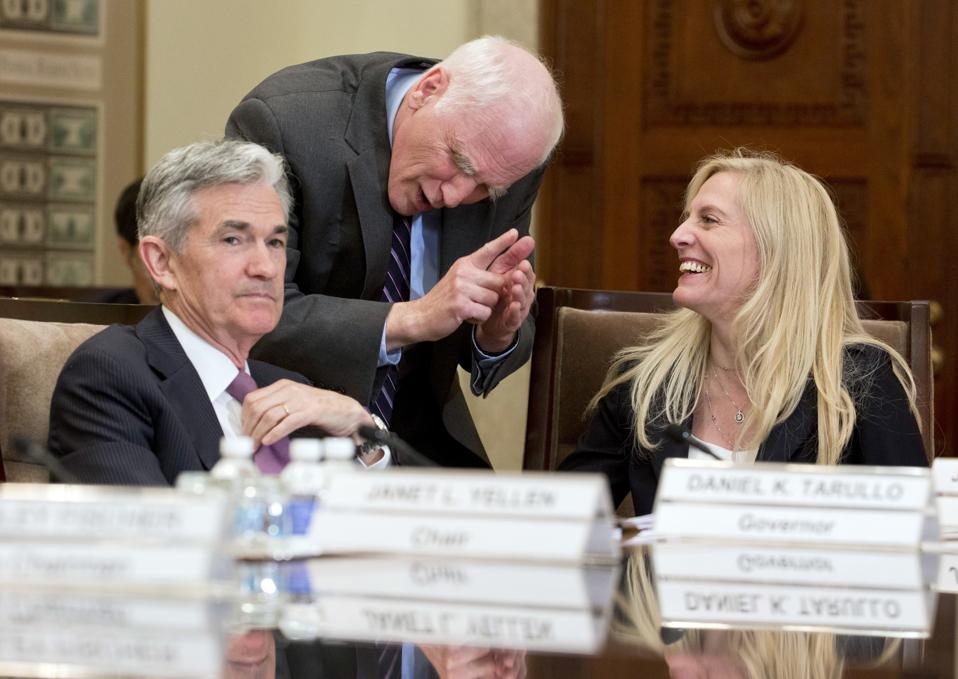 Federal Reserve Governors Jerome Powell, from left, Daniel Tarullo and Lael Brainard, talk before … [+] the start of a Federal Reserve System Board of Governors open meeting to discuss an advanced notice of proposed rulemaking regarding capital requirements for institutions significantly engaged in insurance activities, as well as a proposed rule to apply enhanced prudential standards for systemically important insurance firms at the Federal Reserve Board Building in Washington, Friday, June 3, 2016. (AP Photo/Manuel Balce Ceneta)

Facebook clearly knows how to grab the attention of the world’s central banks. Its Libra initiative, an attempt to create a new digital currency-based payments system on the back of the company’s massive social network, has even caused an about-face at the Federal Reserve.

Rep. French Hill, R-Ark., asked Fed Chair Jerome Powell to report to Congress on what role the Fed might take in digital currencies. Hill pointed out that “None of us know[s] precisely how the digital world will evolve, but it’s important they undertake this kind of preparation work and analysis.”

Hill is one of the most knowledgeable and respected members of the House Financial Services Committee, and this careful approach is certainly reasonable for the central bank. It is just as reasonable, though, that members of the public actively engage with Fed officials and pay very close attention to what those officials are doing.

A recent speech by Brainard is a great place to start.

It affirms the main reason that a central bank issued digital currency is so dangerous: full government control over money. Libra is just the latest reminder that providing money does not have to be a centralized function of government, and that’s clearly what has so many government officials on edge.

Brainard argued that “the public sector must engage” to “explore the role of central bank digital currencies in ensuring sovereign currencies stay at the center of each nation’s financial system.” But government officials should not suppress alternative forms of money to protect sovereign currencies; they should protect people’s ability to decide what forms of money are the best means of payment. Given governments’ poor track record as a steward of money, Brainard’s monetary sovereignty principle should be replaced with one of consumer sovereignty.

It is surely worthwhile to debate this idea, but Brainard’s speech really doesn’t shed much light on the topic. In fact, it clouds the issue by covering topics that go well beyond whether a central bank should issue a digital currency.

Roughly half the speech is devoted to the Fed’s role in the existing payments system. Brainard notes that “the Federal Reserve’s role as an operator has instead long formed the basis of the U.S. approach to promoting accessible, safe, and efficient payments.”

That’s certainly a fair and accurate statement, but it says nothing about how well the central bank has done this job. More important, it ignores that the central bank, or any other federal regulator, can accomplish these goals without issuing a digital currency.

Whatever the means of payment, the government can always play a critical role in protecting people from fraud and enforcing the rules of commerce. One could, in fact, reasonably argue that no alternative currency will ever gain widespread acceptance unless the government fills this role.

The speech eventually connects the Fed’s role in the existing payments system to its possible role in future payment systems in much the same (less than optimal) way. Page 10 notes:

Any stablecoin project with global scale and scope faces a core set of legal and regulatory challenges. Cryptocurrencies already pose risks associated with fraudulent activity, consumer losses, and illicit activity, and these could be magnified by a widely accepted stablecoin for general use. Not only is it not clear what protections or recourse consumers would have with regard to their global stablecoin transactions and balances, but it is also not clear how much price risk consumers will face in cases where they do not appear to have claims on the stablecoin’s underlying assets. If not managed effectively, liquidity, credit, market, or operational risks—alone or in combination—could affect financial stability, triggering a loss of confidence and run-like behavior.

As with the existing payments system, any system based on cryptocurrencies can be policed by governments for fraud, consumer losses, and illicit activity. The government does not need to create its own digital currency to protect people from these problems.

As for the question of whether governments should be in the business of protecting consumers from price risk and financial instability, there’s a good case to be made that doing so tends to make both problems worse. But even if governments assume that mission, they can do the job without creating their own digital currency.

To be fair, Brainard’s speech did address the Fed’s ability to compete with private providers in the payments system. It did so, however, by plugging the Fed’s recent involvement in the real-time payment business.

This choice seems somewhat odd, to say the least, because the Fed completely shafted the private banks that created a new real-time payment network. Those banks created their network based on the understanding that they would not have to compete with the Fed’s own network, and then the Fed announced it would, after all, create its own network.

Aside from highlighting the love-hate relationship banks have with the Fed, this particular instance underscores the core problem with the Fed creating its own digital currency. If everyone – not just banks or certain types of financial firms – has direct access to accounts at the Fed, then private banks will be in direct competition with the central bank for retail customers.

If the Fed moves in this direction, private banks will lose, and so will their customers. Ultimately, the federal government would have full control over the money going into – and out of – every person’s account.

This last feature might seem farfetched, but it is the goal of many academics and government officials.

They want the federal government to have iron-clad control over money in the name of improving monetary policy and financial stability. With this control, of course, comes the power to direct financial resources wherever government officials desire.

This level of government control simply is not compatible with economic and political freedom.