Breaking
Senator Marco Rubio Called Out Twitter For Its...
The False Narrative Of Bitcoin’s Role In Illicit...
Leading By Example Into The New Year
Why Ethereum Has Hit An All-Time High As...
How You Leave Will Shape Your Legacy
The Next Evolution Of Digital Mental Health Support
Paizo And Pinnacle Team Up For Savage Pathfinder
Mammoth U.S. Borrowing Needs Meet Lower Foreign Participation,...
This Leader’s Work To End The Organ Donation...
SAP BrandVoice: Re-Thinking Tax Reporting And Collection In...
What ‘Backs’ The Dollar? Easy: Production
How To Create A Bulletproof Patent
Here’s The Same Financial Advice Given To Mike...
Consumer Health And Wellness Needs Bring New Challenges...
The (Not So) Secret Science Of Whiskey Value...
The Next Five Years: Cyber Insurance Predictions Through...
Home Finance The French Pension-Protest Strikes: There’s More Than Meets The Eye
Finance

The French Pension-Protest Strikes: There’s More Than Meets The Eye 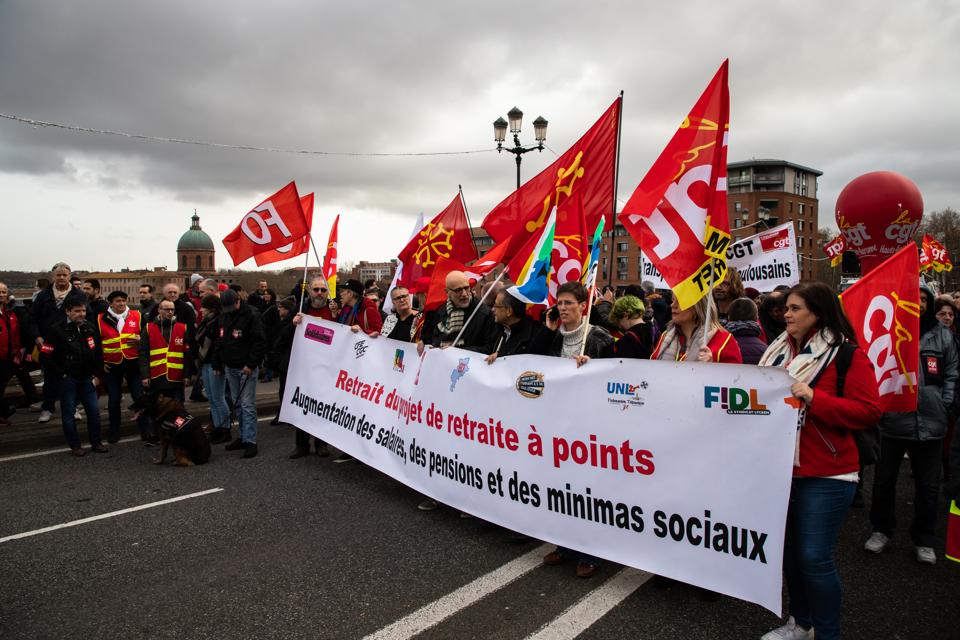 Thousands of demonstrators on 17 December 2019 took to the streets of Toulouse, languedoc … [+] -Roussillon-Midi-Pyrenees, France, against the government’s plans for pension about 120 000 by the count of the union CGT against 17000 by the count of the government. All the union were here to rally, with yellow vest ,teachers, students,rail workers, public services, firement, hospital, education. (Photo by Jerome Gilles/NurPhoto via Getty Images)

Yes, the strike in France in opposition to pension reforms is continuing. Now in its 14th day, not only are mass transit and national rail lines running with limited services, but “French union activists cut electricity to nearly 100,000 homes or offices” and teachers and healthcare workers have also joined the strike, according to the AP. The Guardian reported today that the strike has been estimated to cost the economy about EUR 400 million per day, yet both sides are standing firm. Again according to the AP,

“’Democratic opposition, union opposition is perfectly legitimate,’ he told lawmakers. ‘But we clearly laid out our plans. And on this plan, the creation of a universal retirement system, my determination … is total.’”

What’s more, despite the massive disruption of the strike, it has the support of a majority of the French, not just the public workers. According to ongoing Harris Interactive polling, 62% of those polled on December 16th supported the strikes opposing the pension reforms — down from the 69% on December 3rd just before the strike began, but a modest increase from the further drop to 59% on December 11th. To be sure, 69% of those responding supported a “Christmas truce,” but that doesn’t speak to their opinions on the objectives of the strikers/protesters.

65% of French people say they are worried rather than confident about the new universal plan; this breaks down into 64% of private-sector workers and 75% of public-sector workers. For what it’s worth, this is a modest improvement on pre-strike prior polling, where, on December 3rd, 70% of those polled expressed worry. (Partway into the strike, on December 11th, 63% said they were worried.)

Given the reports in the American media that this strike is about public-sector workers wanting to preserve cushy pensions with exceedingly early retirement ages, these levels of support are hard for Americans to comprehend. Suck it up, buttercup!

And it’s true that President Macron wishes to end the “special retirement plans” that provide generous benefits for employees of certain government-owned corporations — not only railroad employees, sailors and miners but also employees of the Comédie-Française (state theater) and Opéra de Paris (opera and ballet).

But here’s what important to understand, and what’s not being reported as clearly: the change in question extends beyond a boost in retirement ages for favored groups. This is only one small part of a larger complete re-do of Social Security and retirement benefits — for everyone.

In the existing system, civil servants get special pensions, government workers in special occupations get extra-special pensions, and private sector workers receive a Social Security benefit that’s 50% of average wages plus a “complementary system” called Agirc-Arrco which itself already provides benefits based on points.

Here’s how the OECD describes this in its 2019 Pensions at a Glance report, which helps explain not only the Agirc-Arrco system but the concept of “points” in general.

“Uprating of the cost and value of pension points is agreed between the social partners” (that is, the government, employers, and trade unions).

The proposed new system would replace all of these special programs with one universal system which reflects special circumstances with extra points. As explained on the government’s own website on the topic (full disclosure: my French is weak but Google Translate provides a serviceable translation), all workers in arduous occupations will receive greater levels of points accrual for that work. Mothers will receive a 5% increase in points per child, with a further 2% bonus for three or more children. Parents who work part-time or stay at home when their children are young will receive extra points. And various other groups would see tweaks and adjustments.

How will retirement benefits compare for any given individual between the new and the existing system? It’s hard to say. In some cases, there is a clear intention to boost benefits — in particular, the minimum pension will be boosted to 85% of the net minimum wage. But the government isn’t hiding the fact that one important objective is the financial health of the system in the long-term, since, again, these benefits are all funded by their contributions rather than the prefunding of an American private-sector pension plan. In particular, the factor converting points into their ultimate pension value would be adjusted from time to time to reflect changing demographic and economic realities, namely, the high cost of pensions in France at the moment — 13.9% of GDP in 2015, one of the highest rates in the developed world, and projected to climb far higher in the years to come if changes are not made.

So, on the one hand, it seems like rank foolishness for 62% of French people to support the strikers despite the disruption they cause, but, at the same time, well, here’s a man-on-the-street quote from AFP,

“’What scares us about the points system is that we don’t know how much a point is worth,’ said Kelly Grosset-Curtet, a 21-year-old student marching in Lyon.”

This is a massive reform. It certainly appears to be a needed reform (though even better would be a reform with advance-funding), but knowing the scope of what Macron is attempting to do provides at least a bit more understanding of the protests and the French who support them.

Amazon Blocked Sellers From Using FedEx And Now We Know Why