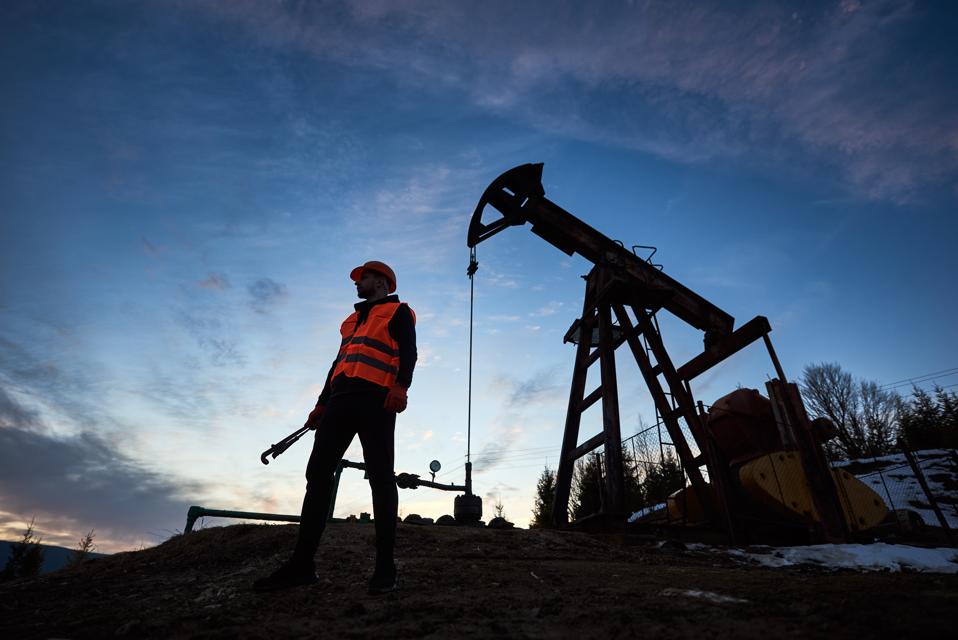 Silhouette of an oilman in orange vest and helmet, standing with his back to the oil pump jack in … [+] oilfield

Exiting Covid-19 shutdowns and one of the sharpest drops in oil and gas industry operations in history will require fortitude across the related oilfield services (OFS) businesses.  If anything, the OFS segment has been hit harder, with perhaps greater consequences, than producers.  Going forward, availability and cost of crucial OFS equipment, suppliers and vendors will impact timing and profit margins as producers slowly re-engage on growth strategies, with inferences for oil and gas commodities prices down the road.  “Green shoots” are emerging.  Recent data from various sources indicate distinct improvement in U.S. demand for petroleum products, increases in vehicle miles driven, reductions in crude oil stockpiles (critical for rebuilding optimism in oil markets) and upticks passenger air travel.

In this conversation with Bernard Duroc-Danner, we explore the shifts in strategic visions for the OFS businesses and thoughts about how the OFS segment must restructure itself.  Our discussion is part of a series on key energy market implications (see here for all recent CES blog contributions).  It also follows a CES webinar, The Future of Oilfield Services with Andrew Gould, former CEO of Schlumberger and Bobby Tudor, Chairman of Tudor, Pickering & Holt and a companion interview with Andrew Gould. (All CES webinars are recorded and can be found here).

Michelle Michot Foss (MMF): Bernard, you have invoked the “David and Goliath” analogy when comparing producers and OFS companies.

Bernard Duroc-Danner (BDD): When looking at the E&P [exploration and production] segment of the industry, whether the international integrated oils (IOCs) and/or the national oil companies (NOCs) let alone the large independents, their sizes dwarf enormously the OFS industry whichever measurement you select. There is more than an order of magnitude of difference no matter the metrics. And their cost of capital, to the extent measurable, is with a few exceptions historically substantially lower than that of the OFS. This makes OFS subject to far greater variance and vulnerability to cyclicality/volatility than their clients. I used to joke when E&P has a cold, OFS has pneumonia. And conversely, of course, in up markets but that never lasted given extreme competitive intensity in OFS.

Blend that with capital intensity and labor intensity and you have an industry which had and still has today a challenging position and “DNA”.

By analogy the same is to a degree true in the automotive world between car manufacturers and their parts manufacturers. But arguably the cyclicality/volatility in oil generally is greater than what the automotive industry endures. The challenges in OFS are worse.

MMF: I note that in my conversation with Andrew Gould, he also pointed to the automotive industry analogy. This plays into OFS financials, correct?

BDD: Yes, over cycles and/or statistically relevant periods of years, critical financial measurements of intrinsic performance such as free cash flow (FCF) or return on capital employed (ROCE) have been typically coming short with the exception of a handful of the historical largest players such as Schlumberger and/or the occasional small specialist technology player. Few in the industry have been able to generate FCF and ROCE in excess of cost of capital on a consistent basis beyond a year or two and not through cycles. This has led to a perception of an uneconomic industry and reflected gradually in lower availability of capital and/or higher cost of capital.

This has been made worse by a contextual shift in strategic views by the financial markets and in turn within the OFS community on the industry’s long term prognosis and therefore intrinsic value.

MMF: The shifting views on the future of oil and the oil industry?

BDD: Coming out of the 1980s and 1990s, there was a strong belief in peak oil supply, and that the passing of time in of itself would imply an increasing demand for OFS and therefore a greater inherent value. The industry’s future value was structurally on an uptrend. In other words aside from any other considerations, time was on our, as in OFS’, side. The industry felt implicitly and for some good reason at the time that ever-increasing “plumbing” requirements to prevent increasing demand from potentially overwhelming supply and even more so a pending peak supply, would support a rising valuation as in higher multiples. We were an industry in increasing importance to manage away a structural limit on supply which would have been a strategic threat to the world economy. Something like that.

MMF: But we have had repeated cycles of supply and demand balances and rising and falling oil prices.

BDD: True, but that was perceived as inevitable cyclicality on our way to an improved secular growth trend to higher needs for OFS as a byproduct of peak supply. We saw in fact a rising trend in plumbing demand underlying short term cycles. There was an implicit belief in peak supply and the expectation was that OFS would deliver along the way to this peak supply an increasing “final value” for investors and shareholders. It wasn’t said explicitly or even articulated with economic or financial jargon. But it was something almost tangible in the OFS soul and de facto optimism as to our long term future.

MMF: I guess that even when I was working most closely on OFS I did not see as strong a conviction as you describe, although certainly, plenty of people were convinced.

BDD: Yes, implicitly or explicitly convinced. Then things shifted profoundly. One was the increasingly vocal dissatisfaction with stewardship of capital by the financial markets primarily addressed to two segments of the oil industry: U.S. independents and OFS. Financial markets were tired of waiting for future improvements in performance even if tied to this notion of increasing intensity of use of OFS to stave off peak supply.

The second factor was the immensely powerful escalation of climate change as a societal and political priority. The “peak supply” thesis had converted to one of “peak demand”. This changes everything long term and further highlights the need for immediate as in now financial returns commensurate with capital expectations. There is no secular or structural improvements in business conditions to support patience on financial performance. It’s quite the opposite. The future is now.

MMF: Where does this leave things for OFS?

BDD: There is only one way to go – there has to be better cash, better returns on capital (ROC) through cycles and effective now. Easy enough of a statement. The question is how? Consolidation is not as often the answer as financial analysts like to say. Barriers to entry are quite low in much of the OFS industry particularly in the North American market. Competitors and destructive competitive intensity grow back like weeds.

Nor is bankruptcy, for that matter a reliable or structural answer. Chapter 11 is often the enemy of progress insofar as it keeps alive an untenable level of competitive pressures with less existential pressures to generate cash insofar as the balance sheet isn’t pressing for cash generation anymore or as much.

The only structural solution in my mind is to revolutionize cost structures, once and for all and rationalize the industry through ruthless cost performance.

MMF: How, exactly? Technology? Something else?

BDD: Technology is always desirable and necessary of a pursuit and a powerful competitive force but often not the only or sufficient answer. Andrew [Gould] is correct about that. Look at pressure pumping – former management of larger players with ample private equity backing created startups that have no technological ability to differentiate themselves from the others and almost doomed to deliver poor returns through cycles. How can that ever work? And it’s not the only example I could provide. The OFS industry needs to spawn companies with a dramatically lower cost structure and I mean for lack of a better term, ruthlessly cheap but yet with highly competitive technology and quality of delivery. These companies will eliminate the excessive competitive pressures the only sustainable way it can be done: by displacing them systematically in the market place yet cover their cash cost of capital along the way. It can be done. Other industries have [done it]. In economic jargon, this new breed of OFS players will permanently lower the industry’s long term marginal cost curve which incidentally in turn will allow the oil industry to live more easily with lower pricing than the often referenced $60 to $70 or even $50 to $60 desirable range.

MMF: But you raised the issue of climate politics and the great fear is that oil industry businesses will not be worth anything in the future.

BDD: Climate politics is reality. Without going into a debate on its legitimacy or the effect of the current pandemic on public finances making transition financing harder etc., the simple fact is the lower the price of oil and gas, the harder it will be for the transition to take place and the longer the operating runway for our industry. It is more complex and nuanced than I just expressed here but the fundamental underlying logic applies. We need a new breed of OFS companies and fewer ones, not just Chapter 11 one time deleveraging. We are temporarily removing the symptom, we are not changing the root cause.

MMF: Well, to me, that kind of profound restructuring means new entrepreneurs, new ways of contracting, data science – real data science for management and logistics. Maybe even private ownership?  Getting out of the public markets?

BDD: All of that if it helps. The key is structural cost revolution by a few determined players and survival of the fittest. It can be done. The OFS industry will be transformed.

Earnings Preview: What To Expect From Best Buy On Thursday

3 Elements Of A Great Culture That Are...

Lessons For Tech Entrepreneurs From The Great Recession

Guardiola: ‘Phenomenal’ Liverpool Would Win The League In...